‘People don’t want to go back to the same’: Why some think labor crunch isn’t just about pay

The labor squeeze has also forced a number of business owners to think outside the box to entice people to apply. According to some entrepreneurs, the post-COVID landscape landscape is making employers think more holistically about the opportunities they’re offering would-be workers.

“We have come up with a plan for employee retention that kind of takes a lot of things into account,” Mike Draper, owner of clothing store RAYGUN Shirts, told Yahoo! Finance Live in a recent interview.

That includes “not just pay but how people are treated and what type of work environment it is,” he added.

Still, economists and policymakers have been hard pressed to come up with an answer for ending the labor shortage. Many republicans have argued that generous unemployment benefits have become more appealing than a paycheck.

However, other analysts have cited the lingering fear of contracting coronavirus, in addition to child care obligations, early retirement and other reasons like unemployment benefits.

“I don’t think it's a matter of people wanting to stay home and stay on unemployment. But I think that people don't want to go back to the same.”Karter Louis, restaurant entrepreneur

Yet according to Karter Louis, CEO of pizza chain Soul Slice, the latter had become a distracting talking point.

“I don’t think it's a matter of people wanting to stay home and stay on unemployment,” the restauranteur told Yahoo Finance Live. “But I think that people don't want to go back to the same.”

Business owners like Louis are using compensation tactics that he learned along the way to retain and motivate workers. “The biggest piece is salary,” said Louis, who pays all his employees a full time salary with benefits, rather than an hourly worker.

“We felt like that would make them more engaged and feel more part of it,” he added. 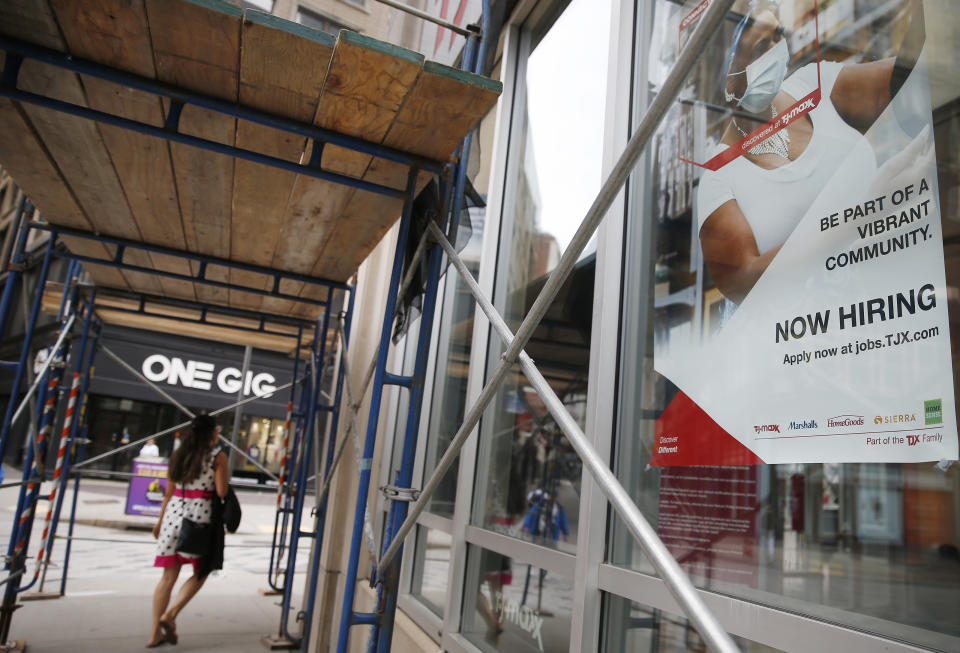 Boston, MA – June 14: A help wanted sign is posted outside of Dunkin Donuts in Downtown Crossing in Boston on June 14, 2021. (Photo by Jessica Rinaldi/The Boston Globe via Getty Images)

It’s no surprise that businesses, especially those in the foodservice sector, are scrambling to fill those vacancies as states begin to reopen. Employers have said that labor and retention are the biggest hurdles in this industry.

That's why Soul Slice, whose selling point is a unique biscuit crust, is paying their employees “the same rate” based upon a worker’s individual skill level, and other factors, explained Louis. And by all accounts, it’s working, he said.

“We had stable labor, which gave us the opportunity to grow even more as a company,” Louis added.

While wages are a pivotal factor in finding workers, RAYGUN’s Draper noted there’s “no quick fix.” The relevant questions include things such as “how [is] your scheduling handled? How is your actual flexibility?” according to Draper. It’s not just “rate of pay.”

All the while, his company is not publicly posting job openings, opting for internal listings so that workers can refer family and friends.

“We look at that as one indicator that the work environment here is pretty healthy, and that we’re able to fill a lot of the positions without having to beat the streets,” Draper added.

No solution in sight as renters, landlords face ‘eviction cliff’ on June 30