The shares of biopharmaceutical concern Ocugen Inc (NASDAQ:OCGN) are surging this afternoon, last seen up 7.2% to trade at $6.56. The positive price action comes after the company announced it is is partnering with Jubilant HollisterStier to manufacture its Covid-19 vaccine candidate Covaxin™ for use in the U.S. as well as Canada. Though the vaccine has not yet been approved, options traders are responding to the news with enthusiasm.

So far today, 91,000 calls and 27,000 puts have crossed the tape, which is double what is typically seen at this point. Most popular by far is the June 7 call, followed by the 7.5 call in the same series, with new positions being opened at both. This indicates traders are speculating on additional upside for OCGN by the time contracts expire on Friday.

Analysts are bearish on Ocugen stock, with three of the four in coverage recommending a tepid "hold." In other words, a shift in sentiment could propel the equity higher. What's more, OCGN's 12-month consensus price target of $5.38 is a 17.5% discount to current levels, leaving plenty of room for upgrades in the near future.

On the charts, Ocugen stock is far from being the powerhouse it once was when the company first went public in 2015, trading around the $600 level. After meddling below the $1 mark since November 2019, though, the equity finally broke above that level last December. It has been a a volatile run on the charts for OCGN since then, but the stock still boasts a jaw-dropping 2,293.1% year-over-year rise. 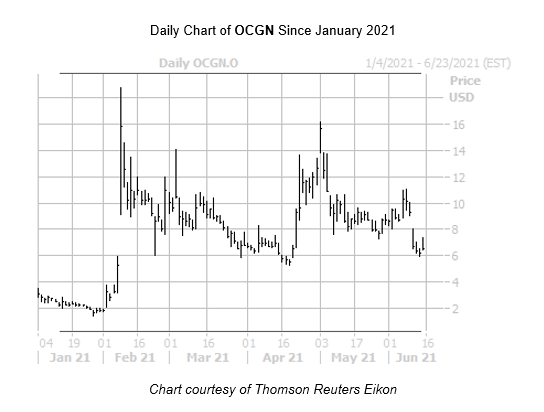