Options Traders Pile on Chewy Stock Ahead of Earnings

Online pet supply retailer Chewy Inc (NYSE:CHWY) has had an interesting run in 2021. Though the stock is now a ways off from its Feb. 16 record high of $120, it has recently been rebounding from its May 13 six-month low of $64.08, with help from its 10-day moving average. Today, the equity is up just 0.4% to trade at $78.11 at last check, ahead of the company's fiscal first-quarter report, due out after the close today. Below, we'll dig into Chewy's history of movement after earnings, as well as how options traders are gearing up for the event. 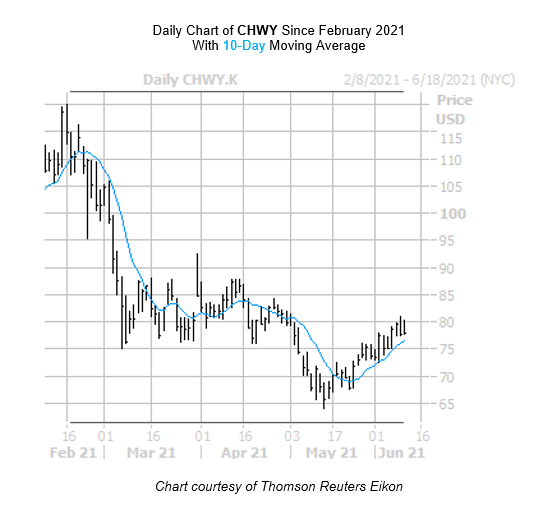 Looking back at Chewy's last eight reports since going public two years ago, the stock has suffered six negative next-day returns, though it jumped 5.4% after reporting earnings back in March. CHWY has averaged a post-earnings swing of 5.8%, regardless of direction, and this time around the options pits are pricing in a much bigger move of 10.3%.

Speaking of option pits, there's a flurry of activity occurring on both sides of the aisle today. Already, 54,000 calls and 24,000 puts have exchanged hands, which is triple the intraday average. The weekly 6/11 80-strike call is the most popular, followed by the June 81 call, with new positions being opened at both. This implies options traders are pricing in plenty of upside for the equity by the time these contracts expire.

Lastly, a short squeeze could put wind under CHWY's sails. Currently, short interest makes up a staggering 29.8% of the stock's total available float, and it would take over four days' worth of pent-up buying power to buy back these bearish bets.