The shares of Virgin Galactic Holdings Inc (NYSE:SPCE) are soaring today, up 17.2% at $24.70 at last check, following news that the space exploration company's weekend test flight was successful. Virgin Galactic's SpaceShipTwo craft — which held two pilots — reached space 50 minutes after takeoff before returning to earth, marking the company's first flight in more than two years and positioning it to launch paying customers by early 2022, according to the company. In response, the security's options pits are exploding with activity

So far, 257,000 calls and 136,000 puts have crossed the tape — six times the intraday average, with volume pacing in the highest percentile of its annual range. The weekly 5/28 25 strike-call is the most popular, followed by the 24 strike-put from the same series, with positions being opened at both.

SPCE is now eyeing its highest close in over a month, as well as its first close above the 40-day moving average since late February. Now back above its year-to-date breakeven, Virgin Galactic stock also boasts a 58.1% year-over-year lead. 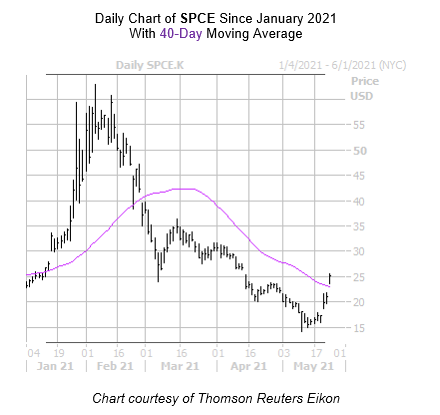 Analyst sentiment is mixed at the moment, with three of seven in coverage sporting a "strong buy," versus four lukewarm "hold" ratings. Meanwhile, the consensus 12-month price target of $31.20 is a 24.4% premium to current levels.

Rounding things out, short sellers are building their positions. In the last two reporting periods, short interest rose 39.4%, with the 33.57 million shares sold short representing a hefty 20.9% of the stock's available float. This could work in bulls' favor, should some of these pessimistic positions begin to unwind.