Oppenheimer: These 2 Stocks Have Triple-Digit Gains in Sight

When the best talk, people listen. It works in all walks of life, but especially the stock market. Investors are keen to read the latest stock reviews from Wall Street’s professional analysts, but knowing who’s the best is the place to start.

Covering the markets for investment firm and brokerage Oppenheimer, Colin Rusch has built a reputation that puts him at the top of the Street’s analyst corps. He’s currently rated #7 overall by TipRanks, out of more than 7,500 analysts offering regular coverage of the markets. Rusch’s ranking is based on more than 400 published reviews, that have accumulated a 63% success rate – and an investor following Rusch’s recommendations in the past year would have seen a 64% average rate of return.

So, let’s catch up with some of Rusch’s recent stock notes. Using the TipRanks platform, we’ve looked up two calls of his and two factors popped out right away: these are Buy-rated stocks with more than 100% upside potential for the year ahead. And for the retail investor, seeking a bargain in the markets, the low point of entry sweetens the pie; each of these stocks is trading for less than $10 per share. Here are the details.

We’ll start with Aeva Technologies, a company working in the field of perception and sensing technology – an essential field in the autonomous automobile industry. Aeva’s main project is the development of 4D LiDAR-on-chip, an achievement which will turn sensing systems on their head by combining silicon photonics, precision velocity measurement, and long-range performance. The resulting package will enable faster and more accurate sensing in driverless vehicles, for better detection and avoidance of obstacles, whether stationary of mobile. Success in this endeavor will give Aeva a clear path forward to success in the autonomous car field.

Back in March, Aeva entered the public trading markets through a SPAC transaction with InterPrivate Acquisition. The merger completed on March 15, and AEVA shares started trading on the NASDAQ on that day. In sharp contrast to last year, SPACS have generally had a hard time in 2021’s stock market, and so has Aeva; the shares have slipped since the public debut. However, AEVA stock hit its trough in mid-May and has been regaining value in the last couple of weeks, after the company released its 1Q21 earnings results – the first as a publicly traded entity.

At the top of the earnings release, Aeva announced that its SPAC merger had netted the company $513 million, and that it had $523 million in cash reserves available at the end of Q1, compared to just $24.6 million at the end of 2020. In a key development update, Aeva revealed that its third generation LiDAR chip is in its final architecture and has integrated all of the core LiDAR components. The company is engaged in setting up production lines for the new chip.

In his coverage of AEVA shares, Colin Rusch writes, “AEVA continues to make tangible progress toward commercializing its FMCW-based 4D lidar announcing its ability to offer 500m range on existing hardware via a firmware upgrade. We believe the flexibility and potential future proofing of systems enabled by its software defined architecture combined with the velocity information is critical for its customers and the potential for product improvement during its useful life. We are encouraged by AEVA delivering its Gen 3 chip design ahead of schedule…. We continue to see AEVA as a long-term winner in the lidar and autonomous space…”

Rusch rates this stock as Outperform (i.e., a Buy), and his $20 price target implies it has room for 104% growth in the next 12 months. (To watch Rusch’s track record, click here.)

Wall Street generally is even more bullish here than Rusch is. The Strong Buy analyst consensus rating is unanimous, based on 5 recent reviews, and the $23.40 average price target suggests a robust 139% upside potential from the trading price of $9.76. (See Aeva’s stock analysis at TipRanks.) 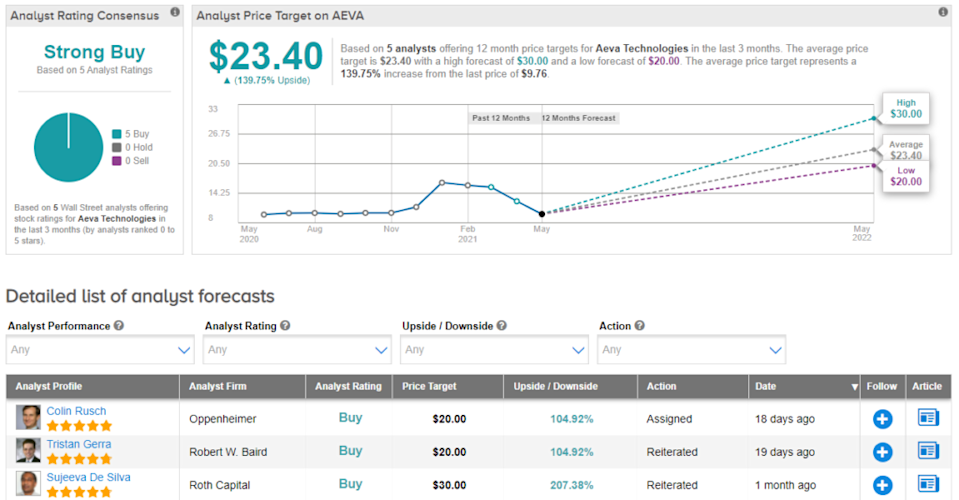 Our modern world has brought us technological marvel – but also an enormous level of industrial pollution. Among the worst pollutants is lead.

Lead has been used in a wide range of products, most notably in pipes and batteries, from which it can leach into the environment and then into us – where its toxic effects are proven dangerous. This makes lead one of the most recycled materials in the world today. Aqua Metals specializes in clean recycling technology for lead acid batteries. The company uses its proprietary AquaRefining process – a water-based, room temperature lead refining process that is non-polluting – to replace the current system of high-temperature lead smelting. Such lead smelting is one of the world’s most polluting industries.

Aqua Metals has a huge potential market, as some 80% of the lead used in the battery industry is recycled. While dangerously toxic, these batteries are going to be with us for at least the foreseeable future, as lead acid batteries are also the only 100% recyclable and rechargeable batteries on the market.

The company is working to expand its niche, and it has applied, earlier this year, for patents in the field of lithium ion battery recycling. Where lead acid batteries are heavily used in industrial applications, lithium ion batteries are ubiquitous in electronics – and they contain of host of other toxic metals, such as cobalt, nickel, and manganese. Aqua Metals hopes to apply its refining technology to these batteries, as well.

Aqua Metals’ processes are not yet in operational use, and so the company has no revenues and earnings to speak of. In the first quarter of 2021, Aqua Metals reported a net loss of $4.1 million, coming to 6 cents per share, compared to the $4.4 million, 7-cent per share, net loss reported in the year-ago quarter. Also in 1Q21, Aqua Metals invested $1.5 million in the LINICO Corporation, another cleantech company in the lithium ion battery recycling niche.

Rusch is bullish on this speculative company, writing of it, “We continue to believe AQMS' closed loop zero-emissions process technology for recycling lead is a critical enabler for portions of the battery supply chain to reach net-zero emissions and has the potential to become the de facto standard process for recycling lead as the world moves toward net-zero commitments in 2040. We are looking at the announcement of a license and equipment supply agreement as the next, and critical, validation of the business model.”

The 5-star analyst gives AQMS an Outperform (i.e., Buy) rating, along with a $7 price target that implies a one-year upside of 147%.

Both recent reviews on AQMS shares are positive, giving the stock its Moderate Buy consensus rating. The trading price is $2.83, and the average price target of $7.50 suggests a strong 165% upside from that level. (See Aqua Metals’ stock analysis at TipRanks.) 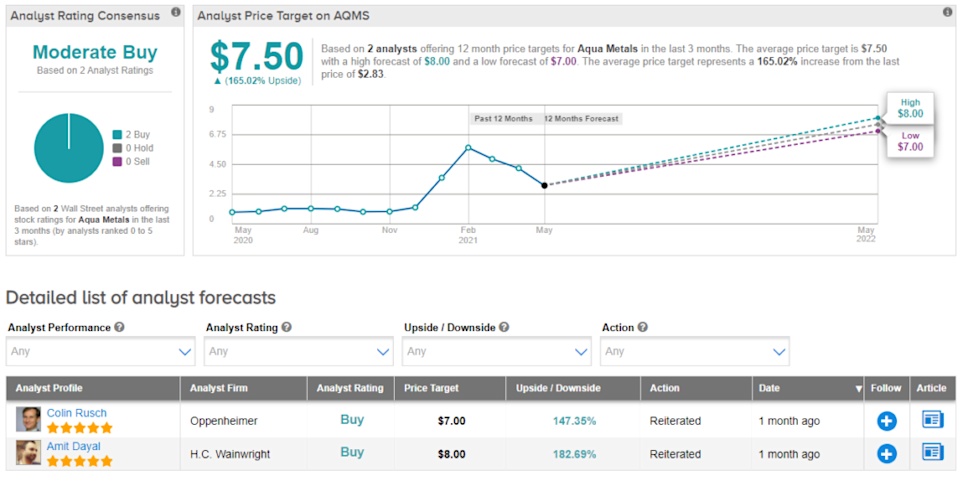