Op-Ed of the Day: ‘Tax Evasion, Plain and Simple’

The Biden administration won a victory last week when 130 countries agreed in principle to establish a global minimum tax on corporate profits, but according to economist Gabriel Zucman, writing in The New York Times Wednesday, the potential 15% levy is “too little, too late.”

Along with graphics editor Gus Wezerek, Zucman lays out the argument that multinational corporations have been the main winners of the global “race to the bottom” in tax rates, with disastrous results for middle-class taxpayers.

Over the last few decades, a handful of countries such as Ireland and Bermuda have become legal tax havens, helping U.S. business owners slash their tax bills while amassing unprecedented wealth. To make up for lost tax revenues at home, Congress has raised taxes on labor. 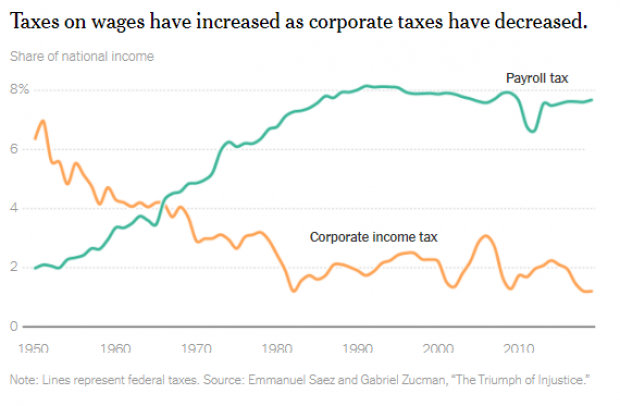 Zucman cites Facebook and Nike as examples of companies that have “resorted to devious schemes” to shift profits and slash their tax bills. In 2018, the social media giant recorded $15 billion in profit in Ireland, despite having a tiny workforce there. And for years, Nike has placed ownership of its famous logo in a Bermuda-based subsidiary.

“This is tax evasion, plain and simple,” Zucman writes. “When a company logs billions of dollars in profit in a shell company, it violates the spirit of the Internal Revenue Code’s economic substance doctrine, which states that a transaction must have a purpose other than to reduce tax liability.”

In response to these maneuvers, Zucman calls for the establishment of a 25% minimum corporate tax, higher than the 15% proposed by the White House, which Zucman says would allow some companies to pay a lower total tax rate than many American workers. “The time for incrementalism is long past,” he writes. “For decades, Congress has been playing catch-up as business owners and a handful of tax havens have driven international tax policy. The result has been a nation where working-class Americans are left with underfunded public schools and hospitals as the wealthy board rocketships to outer space.”

While it certainly wouldn’t be easy to enact, Zucman says the funds resulting from a minimum tax would go a long way. The 25% corporate tax “would bring in about $200 billion in additional revenue each year,” he writes. “Over 10 years, that money would be more than enough to pay for nationwide high-speed internet, free community college and universal preschool for 3- and 4-year-olds.”