Oil prices hit their highest level in more than two years as OPEC+ agreed to maintain its production cut plans while demand projections continue to improve. 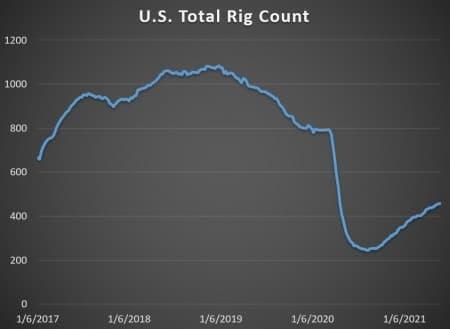 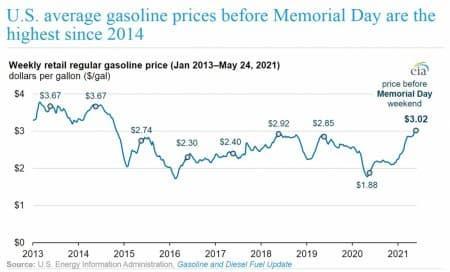 – The average retail price for gasoline in the U.S. jumped above $3 per gallon last week, the highest price since 2014.

– Memorial Day travel is expected to be 50% higher than the same weekend in 2020.

– California saw the highest prices at over $4 per gallon, while Texas saw the lowest at $2.72.

– BP (NYSE: BP) and Eni (NYSE:E) are in early-stage talks for the Italian energy firm to take over BP's assets in Algeria, Reuters reports.

Oil prices rose by 1 percent early on Monday, driven by expectations that recovering demand with summer travel and reopening economies will easily accommodate the gradual increase in OPEC+ production.

But oil prices rose even more sharply on Tuesday, with Brent topping $71 per barrel, the highest level in more than two and a half years. “The demand growth is pretty OK, the OPEC+ discipline is very good, inventories are going down,” Fereidun Fesharaki, chairman of consultants FGE, said in a Bloomberg television interview. “If there is no Iranian shadow on the market, prices could hit $75-$80 by the middle of the third quarter.”

OPEC+ reaffirms trajectory. OPEC+ officials met for a virtual meeting on Tuesday and reaffirmed its current plans to gradually increase production in July. The Joint Technical Committee (JTC) of the OPEC+ group maintained at a meeting on Monday its outlook for global oil demand growth at around 6 million barrels per day (bpd) this year.

Bullish sentiment gathers again. Even with Brent at the $70 marker, some analysts see more room to run. “We see demand outstripping supply in the order of 650,000 barrels per day and 950,000 bpd in Q3 and Q4 respectively,” ANZ analysts said.

Related: Could Trains Ever Be Powered By Hydrogen?

Supply shortage? “The market is now facing the exact opposite dilemma of April 2020,” said Louise Dickson, an analyst at consultancy Rystad Energy. “Producers now have just as delicate of a task to bring back enough supply to match the swiftly rising oil demand. If markets over-tighten, a flare-up in prices could jeopardize the global economic recovery.”

Iran aims to ramp up supply. The U.S. and Iran are nearing a deal to restore the terms of the 2015 nuclear agreement, and Tehran is already eyeing an increase in oil production. “The next Iranian government should make it a top priority to raise oil production to 6.5 million barrels a day,” Iranian oil minister Bijan Namdar Zanganeh told reporters. The higher output will “improve the country’s security and political might.” Separately, an Iranian official said they hoped for a deal by August, dampening prospects that a deal would be reached this week.

OPEC+ enjoys new era with oil majors constrained. Western oil companies are under escalating pressure to constrain their production as the energy transition gathers pace. But with supply kept in check, OPEC+ could see new tailwinds with space to bring production back online even as oil prices remain at relatively high levels. “We see a shift from stigmatization toward criminalization of investing in higher oil production,” said Bob McNally, president of consultant Rapidan Energy Group and a former White House official.

Equinor and Exxon go forward with $8 billion Brazil project. Equinor (NYSE: EQNR) and ExxonMobil (NYSE: XOM) said on Tuesday that they would proceed with an $8 billion oil field in Brazil, which is slated to come online in 2024 and have a production capacity of 220,000 bpd.

Shale merger wave on the way. The U.S. shale sector could be in for another consolidation wave. This time, unlike last time, drillers seem to be willing to stick with the new agenda of capital discipline.

Intel Warns: Chip Shortage Threatens EV Boom. The current global chip shortage could take until 2023 to be overcome, semiconductor maker Intel said on Monday in another warning that the microchip supply crunch could delay the electric vehicle (EV) revolution.

Gas bans in homes rattle industry. A growing trend of banning new natural gas hookups in homes and businesses is ratting the gas industry. Some utilities are fighting aggressively to head off bans, others are taking a second look at growth scenarios. “We welcome the opportunity to avoid investments in new gas assets that might later prove to be underutilized as decarbonization efforts progress here in California,” a spokesperson with PG&E told the WSJ.

Related: Colombia’s Oil Industry Is On The Brink Of Collapse

Asia refinery margins crash to $0. Asian refiners are struggling with a major slump in profit margins because of the resurgence in Covid-19 infections in the region, Bloomberg has reported, citing the latest trends in complex refining margins in Singapore.