Ocugen a Questionable Contender in the Vaccine Race

As far as vaccine plays go, Ocugen (OCGN) remains an intriguing speculative pick today. There are certainly many reasons to be optimistic about this company’s prospects, and numerous retail investors have jumped aboard.

The company has many of the traits speculators seek in a moon-shot target. Ocugen’s market capitalization is relatively small (around $1.57 billion at the time of writing). Additionally, the company’s float is relatively small and its short volume ratio is high (around 28% at the time of writing). These sorts of factors play into the short squeeze discussion that have taken other stocks on parabolic moves this year.

The idea that another surge is possible has brought speculators to this stock. However, there’s also a solid underlying basis by which fundamental investors are buying OCGN stock right now. Let’s take a look to see if that case can be made.

Most of the discussion around Ocugen right now surrounds the company’s partnership with Indian biopharma company Bharat Biotech for the development of the COVAXIN COVID-19 vaccine. This partnership gives Ocugen, Bharat’s American partner, commercialization rights in the U.S. for COVAXIN.

Now, if the FDA provides approval for COVAXIN domestically, Ocugen stock could really take off. The U.S. market remains the crown jewel that most drug manufacturers have pursued, and with potential booster shots on the horizon, there could be a longer runway for this vaccine rollout than previously thought.

However, bears have noted that Ocugen may be late to the game in terms of commercializing its drug in the U.S. Recent reports showed that over 70% of older U.S. adults are fully vaccinated, with 84% of the 65+ population having received at least one dose. Accordingly, the window of opportunity for Ocugen may be closing.

Additionally, this partnership happens to be much less favorable to Ocugen than Bharat. According to recent reports, Ocugen stands to receive only 45% of any profits in the U.S., should Ocugen get this vaccine approved and distributed before the window closes. In other words, Ocugen is going to be responsible for doing a significant amount of work for relatively little return, if the vaccine is approved at all in the U.S.

Vaccine plays seem to remain higher risk, as was apparent in the difficulty AstraZeneca (AZN) has had in gaining approval. Given where valuations for vaccine plays like Ocugen are today, the risk is high in relation to the potential reward. 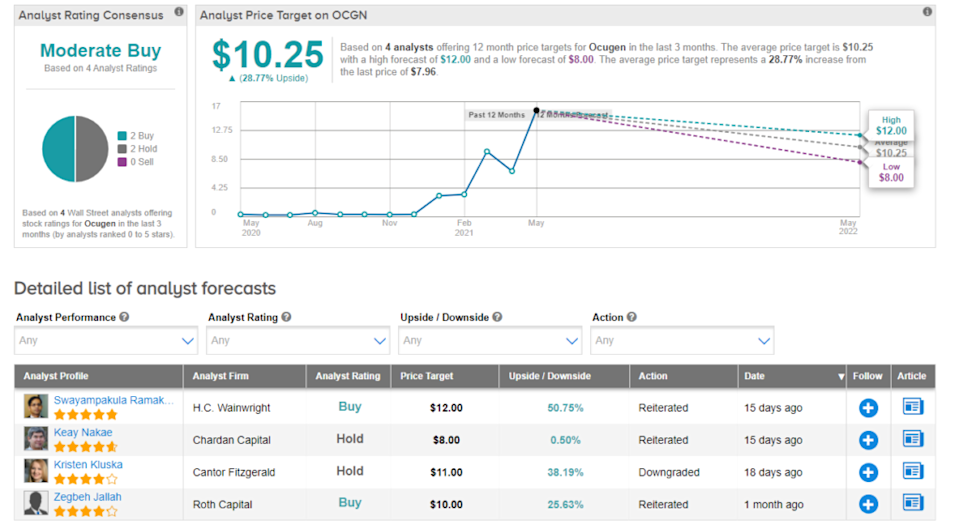 Ocugen’s speculative appeal is noteworthy. Therefore, it’s understandable that speculators might want to take a chance with this stock. Should the FDA approve COVAXIN, investors can expect to see a near-term surge. With a casino-like mentality in the stock market today, this makes Ocugen an obvious favorite for specific risk-seeking investors.

That being said, more conservative investors might decide to steer clear of this stock. Many risk-averse investors are likely to question whether the risk-reward of this stock warrants investment at these levels, given its abundance of downside potential.