Novavax (NVAX) had fallen behind in the race to get a Covid-19 vaccine to market and watched as others gained approval and made successful market entries with their respective offerings. However, last week Novavax finally released the data for its U.S./Mexico late-stage trials and the results were excellent, placing the biotech in the same league as its rivals.

The trial’s success is the third such study Novavax’s Covid-19 vaccine candidate NVX-CoV2373 has excelled at following successful tests in the U.K. and South Africa.

B. Riley’s Mayank Mamtani thinks that going forward this factor could give Novavax an edge not only because of the diverse trial locations but also due to it proving effective in “a variant-rich environment.”

Novavax might have been late to the initial vaccination race, but in the anticipated booster market, Mamtani thinks “the safety profile of '2373 is particularly attractive.”

The company is also finishing off the paperwork for the imminent regulatory filings in several regions. As far as the U.S. is concerned, as the FDA needs 30 days to review the package prior to allowing an EUA approval, this is now likely to come late in the third quarter.

Mamtani says these will be aimed at primarily “serving variant-afflicted countries, with high C-19 disease burden and in need of highly efficacious C-19 vaccines.” But not only; other countries, such as Canada, U.K, and U.S., represent key territories where NVAX “continues to gain validation on clinical data, and regulatory & public policy fronts to materially strengthen '2373's positioning relative to mRNA peers.”

All of this keeps Mamtani with the bulls. As a result, the analyst continues to assign a Buy rating and $286 price target to the stock. Should his thesis play out, a potential twelve-month upside of 47% could be in the cards. (To watch Mamtani's track record, click here)

Looking at the consensus breakdown, three other analysts agree with Mamtani’s Buy review, while 2 others suggest to Hold, all coalescing to a Moderate Buy consensus rating. The forecast is for 12-month gains of ~28%, given the average price target stands at $249.60. (See NVAX stock analysis on TipRanks) 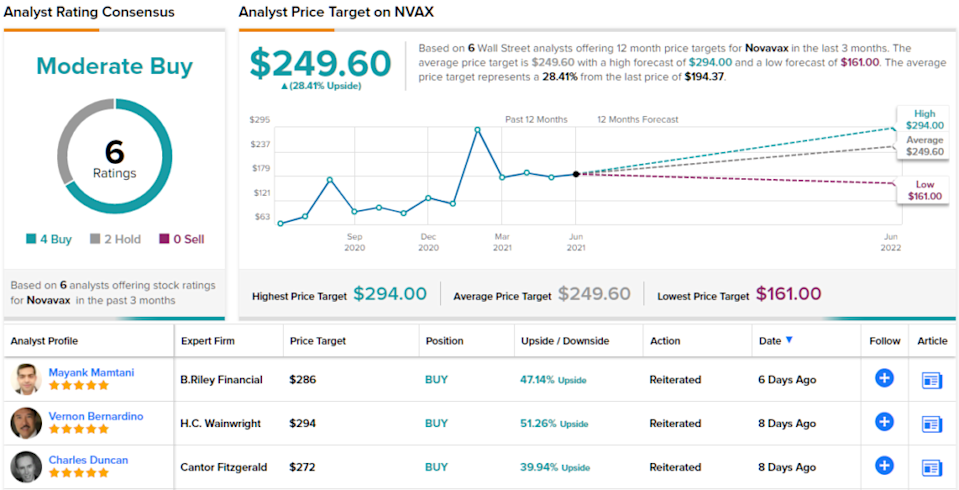