Are 3D printing stocks the wave of the future? Investors seem to hope so.

Indeed, the technology these companies bring to the table really could be a game-changer for key industries. Companies like Nano Dimension (NNDM) have certainly turned heads in this regard. This 3D printing company represents what many believe will be the future of manufacturing. At the very least, investors have bought into this thesis in a big way recently. (See Nano Dimension stock analysis on TipRanks)

Cathie Wood has been a massive supporter of NNDM stock over the years. Ms. Woods has continued to up her stake in the $1.5 billion 3D printing play, adding this stock to her actively-managed ETFs in increasing quantities as of late.

Since hitting a peak of nearly $18 per share earlier this year, shares of NNDM stock are now down to around the $7 level at the time of writing. Indeed, any stock that loses close to 2/3 of its value in less than half a year ought to be one investors either continue to double down on, if they believe in it, or let go.

Unfortunately for investors in NNDM stock, it appears that selling from the latter group continues to hamper this stock’s performance, at least for now.

Here’s the biggest reason why many believe this to be the case.

There are many pre-revenue (or near-zero revenue) companies out there trading at high valuations. Indeed, a stock price is supposed to represent the discounted value of all future cash flows of a given company. Therefore, equities are inherently forward-looking. In some sense, investors shouldn’t care about what potential hyper-growth stocks earned in the past.

However, when we take a look at Nano Dimension’s financials, the picture really doesn’t look that enticing from a growth perspective.

The company has been around for a while, but has only managed to rake in $3.5 million in revenue over the past 12 months. This revenue number is actually down year-over-year substantially, and is lower than its 2018 revenue numbers as well. There’s not much of a growth case to be made for this company right now.

Indeed, it appears Nano Dimension’s proprietary DragonFly Lights-Out Digital Manufacturing system could take off, in the right environment. The potential is there. However, until results are shown, investors are right to price in higher execution risk with stocks such as Nano Dimensions that have, thus far, failed to produce results.

That said, it’s hard to buy into the $1.5 billion valuation on some pretty heavy cash flow losses thus far.

This is the key question on the minds of investors in Nano Dimension right now.

Indeed, the company’s operating in a hyper-growth sector. Some estimates have pegged growth in the 3D printing space at a CAGR of 26% over the next four years. That kind of sky-high growth should get investors excited.

However, Nano Dimension has yet to prove that its technology warrants a growing market share relative to its competitors. Like every hyper-growth industry, the rise of new entrants makes competition a risk factor for long-term growth. The longer Nano Dimension remains in a near-zero revenue state, the more time the competition has to bolster their market positions and take away a larger slice of the growing pie.

For now, Nano Dimension’s share price is factoring in growth much higher than the average market CAGR. Growth is certainly possible. However, many just don’t see this as likely, given what has transpired thus far. From a fundamental basis, it’s hard to make the argument that NNDM stock represents good value today.

According to TipRanks’ Smart Score analysis, NNDM scores a 3 out of 10. That means the stock is likely to perform below market averages. 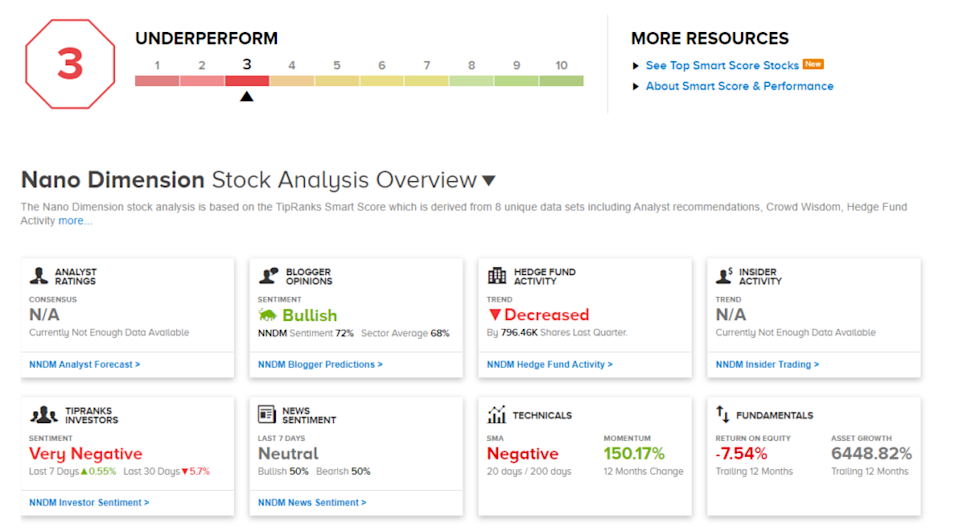 Nano Dimension offers a great story to hyper-growth investors looking for the company of the future to invest in for their grandkids. The hype that’s surrounded this stock appears to have a lot to do with thought leaders such as Cathie Wood jumping aboard.

However, with any stock, investors need to assess the fundamentals on their own. In so doing, it appears to be difficult to make the case that Nano Dimension is anything but extremely overvalued at these levels.

The stock’s dropped 65% from its peak, but it still looks overvalued. That puts hyper-growth investors in a tough spot.