Nio vs. Tesla: Investors on the Fence

The race for global EV supremacy is on, and growth investors have quite the range of options to choose from in the EV sector.

The adoption of EVs is set to continue to accelerate over time. The EV sector is expected to grow at a CAGR of 29% from 2021 to 2026. As such, growth investors have flocked to both Tesla (TSLA) and Nio (NIO) as the beneficiaries of this incredible growth catalyst.

Now, the question most investors have on their minds is: which company offers the best growth prospects? The answer really isn’t obvious. However, when looking at the core operations of both companies, it becomes clear that one indeed seems better than the other. (See Nio stock analysis on TipRanks)

In some sense, the discussion of whether Tesla or Nio is a better investment at these levels comes down to an analysis of the company’s core markets.

Tesla operates in China, and Nio hasn’t really cracked the international markets thus far. In this regard, the choice may seem to be simple – Tesla is the frontrunner for global domination in the EV space.

However, recent events have cast some doubt on this thesis. U.S.-China relations have deteriorated rapidly during the Biden Presidency. Hopes of strengthening Sino-U.S. relations have been thwarted by what appears to be jockeying for global superpower status. Tesla has been caught in the crossfire in this political war of words.

China has recently clamped down on Tesla in a big way. A ban on Tesla ownership for government officials and employees of government-sponsored companies was recently expanded. A few days ago, the Chinese government announced that Tesla vehicles would be banned from government compounds and agencies. This is an escalation of a move that many believe could lead to Tesla’s market share becoming regulated out of China.

Accordingly, as the poster child for China’s booming EV sector, Nio stands to benefit. China currently holds approximately 41% of the global EV market share, compared to the U.S.'s market share of 2.4%. China’s market share number is actually expected to increase over the medium-term, given the rapid rate of EV growth in China (50% expected growth in 2021) relative to the U.S. and the rest of the world.

In this aspect, Nio looks highly attractive from a growth standpoint. Tesla CEO Elon Musk has previously commented that China will be the company’s biggest market. Now, these geopolitical concerns have poured a bucket of cold water on that idea. If Tesla is pushed out of China, Nio stands to reap the growth EV companies are jockeying for right now.

Tesla and Nio: Not Operating in a Vacuum

Both EV players have great business models, and both have shown market leadership in their respective core markets.

One can argue about which market is better. However, there’s also the pesky reality that competition in the EV space is likely to continue to heat up as traditional ICE vehicle manufacturers join the EV party.

The effect of that phenomenon was seen recently, when Ford (F) unveiled the F-150 Lightning. That entry into the EV market resulted in double-digit declines in other heavy-duty EV makers. Clearly, the idea that market share leads are impenetrable is quite asinine right now.

Both Tesla and Nio have steep competition in their core markets. Additionally, European players are stepping up with incredible offerings aimed at both American and Chinese buyers.

Indeed, modeling out both companies isn’t likely to be easy in the coming years. Competition could provide rapidly-changing inputs for both stocks in investors’ models.

What Analysts Are Saying About NIO Stock 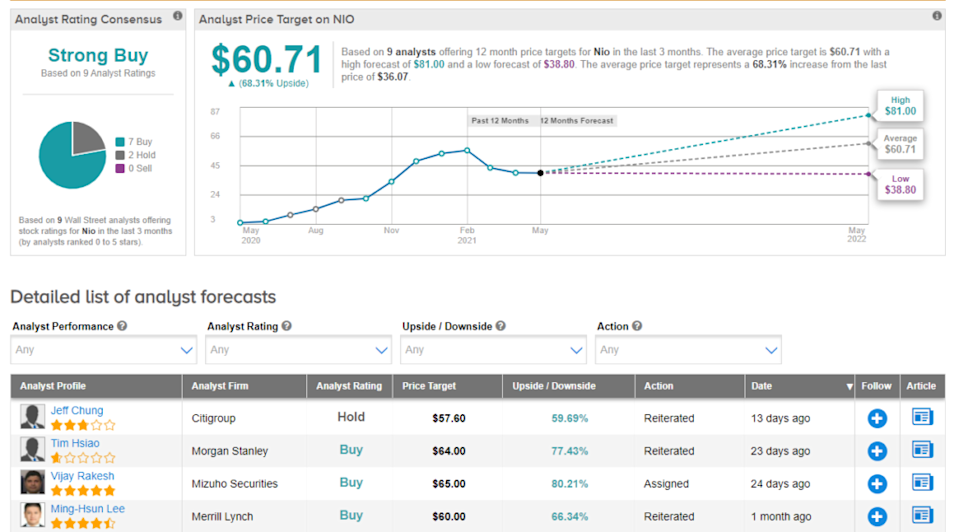 If both Tesla and Nio become chess pieces used as pawns in a geopolitical regulatory war, there will certainly reason to be wary of owning Tesla right now. In contrast, Nio’s strong position in the hyper-growth Chinese market makes this stock extremely attractive today.

Both stocks are valued in the nosebleeds when it comes to valuation. Accordingly, investors will likely make their investment decisions on the basis of forward-looking growth assumptions. On this basis, Nio looks like a much better option right now.