‘Never give up on New York’: Douglas Elliman CEO on housing market

New York City's housing market appears to be back from a yearlong slumber brought on by the coronavirus pandemic.

Apartment sales in Manhattan skyrocketed 152% in the second quarter of this year from the same time a year ago — the highest increase in more than 30 years — according to new data by appraisal firm Miller Samuel and brokerage Douglas Elliman on Friday. That's in stark contrast to last year, when sales fell 54% in the second quarter of 2020, a record annual decline, as the city entered an unprecedented lockdown and urbanites were flocking to the suburbs seeking bigger living spaces where they could set up their home office.

"Although we're not fully there yet, we are so far ahead of the curve that it's unbelievable. But that's New York City for you," Dottie Herman, Douglas Elliman CEO, told Yahoo Finance Live on Thursday, when the Big Apple officially re-opened and a day before the latest Miller Samuel/Elliman quarterly report was released. "I've always said, never give up on New York. Never bet against it. You're going to lose. New Yorkers are resilient."

Despite the surge in activity, Herman believes there is still time for home seekers to get a deal in the city, but prices are "rising quickly." 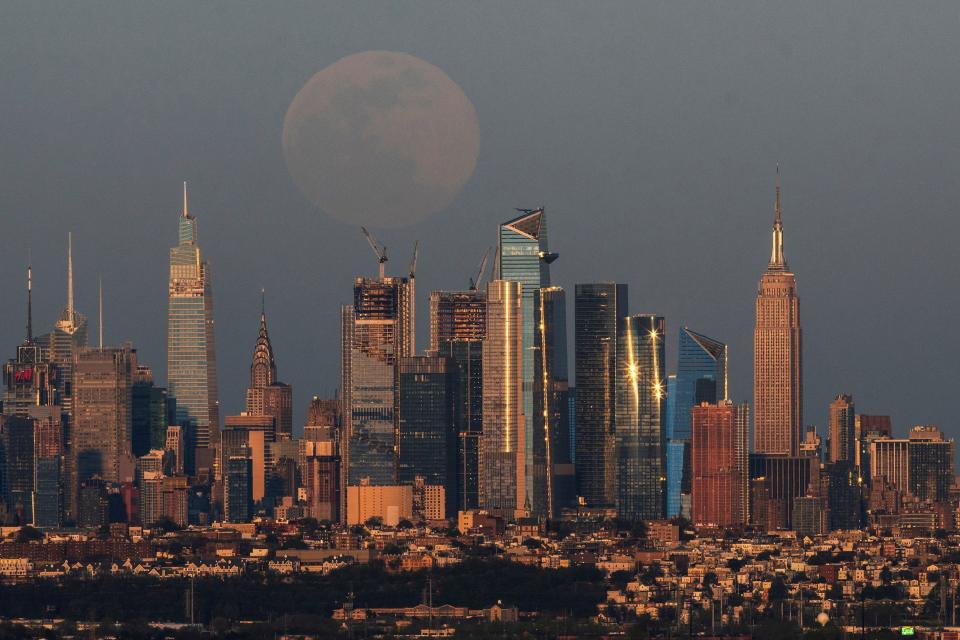 The full moon, known as the “Super Pink Moon”, rises over the skyline of New York and Empire State Building, as seen from West Orange, in New Jersey, U.S. April 26, 2021. REUTERS/Eduardo Munoz TPX IMAGES OF THE DAY

According to the report, 92% of the home sales completed in the second quarter were below the sellers' asking price — the biggest share since Miller Samuel and Elliman started tracking the metric in 2008. Meanwhile, median sales price in Manhattan in the quarter was up 13% from the same time last year. That metric was skewed slightly by the 8.3% increase in average sales size of 1,241 square feet, the report said.

For renters, there are also still opportunities to take advantage of in New York City. Rents in the city fell to record low levels during the first three months of this year. And according to new data from Apartment List, rents in July remain below pre-pandemic levels in some of the hardest-hit markets, like New York, where rent is down 7% from March of 2020.

"Because prices are down in the city, you have a lot of younger people, who were priced out completely and so had to move outside, having an opportunity to come back," said Herman. "I was in Palm Beach…when we were on complete lockdown. Everyone was like, well, what should we do? They stayed for a while. And then they said, hey, we want to get back to New York City. There's no place like here."

Amanda Fung is an editor at Yahoo Finance.