Newly released data confirms Netflix (NFLX) is truly the dominant player in the over-the-top streaming industry in the U.S. The competitive landscape suggests it would be difficult for a rival to dethrone the company from its market leadership position.

Nielsen Holdings PLC. (NLSN), a data research firm based in the U.S., specializes in gathering and publishing statistics related to the media industry. Last week, Nielsen published details regarding the most-watched TV shows and movies in America for the week ended April 18, 2021.

Disney+, owned by The Walt Disney Company (DIS), secured the number 1 spot in the original TV series category with the release of The Falcon and The Winter Soldier. Them, an original series available on Amazon (AMZN) Prime Video, was the second most-watched original TV series for the week.

The remaining eight spots were secured by various original shows produced by Netflix, Inc. In the “Acquired TV Series” category, Netflix secured all of the 10 spots among most-watched shows, along with five spots in the “Movies” category as well (including the number 1 position). (See Netflix stock analysis on TipRanks)

Netflix spent $11.8 billion on producing original content in 2020, but the production of some programs had to be postponed due to the global lockdown in the first half of the year. The company expects to spend $17 billion on content in 2021, which does not come as a surprise considering Netflix’s plans to ramp up content production this year.

Netflix spent only $2.4 billion on original content back in 2013, when the streaming company had only 41 million active subscribers. Since then, content spending has multiplied, as the number of subscribers has skyrocketed to 208 million.

Based on those numbers, it would be reasonable to assume that content spending and subscriber growth are positively correlated. Netflix has more subscribers than any other content streaming service at the moment, and the billions of dollars the company has spent in the past on producing high-quality original content played a massive role in helping the company retain the number 1 spot in the industry for so long.

In 2020, Amazon Prime Video spent $7 billion on original content, while Hulu and Apple TV+ spent $2.5 billion and $6 billion, respectively. It is difficult to estimate how much Disney+ spent on original content, but the number is likely to be substantially lower than the $17.3 billion Netflix spent.

As evidenced by this data, competitors are finding it difficult to keep pace with Netflix when it comes to investments in content. Netflix’s market-leading content budget is likely to help the company dominate the industry in the foreseeable future.

Netflix, arguably, is in a good position to emerge as a winner because of the expected release of highly anticipated movies and series such as Army of the Dead, Stranger Things 4, Arcane, Awake, The Last Letter From Your Lover, and Resident Evil: Infinite Darkness in 2021.

According to Statista, 74% of American households have access to Pay-TV connections, but the cord-cutting movement is gaining traction, threatening the survival of legacy cable TV companies. The Leichtman Research Group projects major Pay-TV providers lost 5.1 million subscribers in 2020, and the industry lost 4.8 million subscribers in 2019 as well. Most of these cord-cutters instead purchased subscriptions from the likes of Netflix and other OTT streaming companies.

The expected rollout of 5G technology and the growth of companies such as Fubo TV Inc. (FUBO) that specialize in live sports streaming will accelerate the cord-cutting movement, paving the way for leading streaming companies to report stellar earnings.

Netflix added just 4 million subscribers in the first quarter, well below the Wall Street estimate of 6 million net additions. This weak financial performance played a major role in the 15% decline in the stock price since February. Wall Street analysts, however, remain bullish on the company, and the average analyst price target of $599.91 implies upside of 20.5% from the current market price.

The analyst rating consensus is a Moderate Buy, with 26 Buy, 5 Hold and 4 Sell ratings. 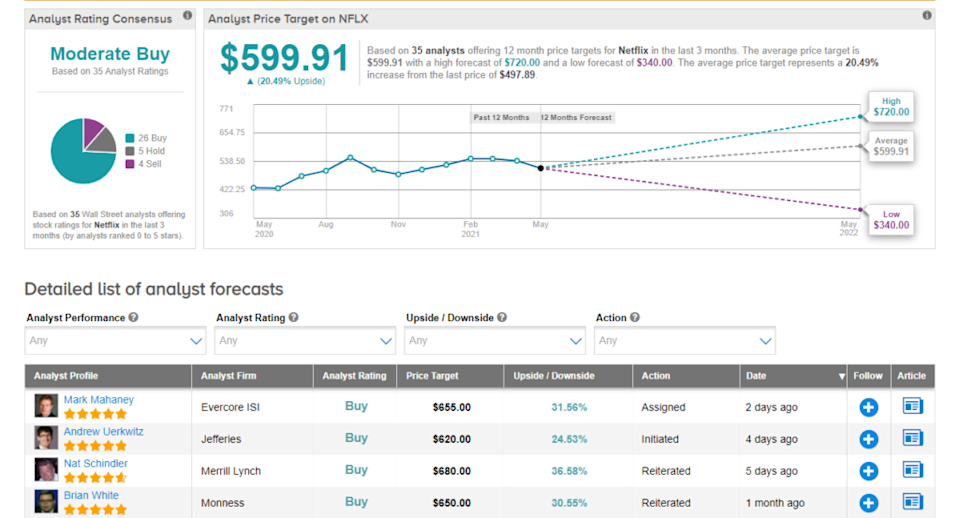 Disney+ made a breakthrough by topping the list of most-watched original TV programs for the week ended April 18, and Netflix continues to dominate the industry. With an industry-leading content budget and favorable industry conditions acting as tailwinds, Netflix is likely to report strong earnings growth in the future.