Netflix: Is the Streaming Giant Running Out of Steam?

Netflix (NFLX) is a global leader in the fast-growing streaming-on-demand entertainment business. It owns a massive customer network with a meaningful and growing presence in virtually every country other than China.

The main value for NFLX comes from its monthly subscription fee that it generates through its massive subscriber network. Meanwhile, its competitive advantage is boosted by its enormous content library and strong name brand that leads to significant customer growth in its newer markets. (See Netflix stock analysis on TipRanks)

The company also boasts sticky loyalty among its existing customers, and a massive trove of consumer data that it has accrued. It can leverage this data to better inform choices for new content production. That helps the company creates content that will best satisfy existing customers and attract new subscribers. It can also use its data to target advertising with maximum effectiveness to promote its products.

Thus far, the results have been terrific as revenue has exploded by over 17,000% in under two decades of operation. The stock has generated total returns that exceed the S&P 500’s by a jaw-dropping nine-to-one over that span.

However, the company has run into some recent headwinds as major deep-pocketed rivals have poured into the streaming space, including Amazon (AMZN), Disney (DIS), and AT&T (T). While Netflix enjoyed a head-start in terms of customer network and industry-specific data and tailored content, each of these competitors has deeper pockets due to highly profitable core industries that can finance its investments into streaming.

Furthermore, all three of these companies have massive customer networks of their own from other businesses that have also given them significant consumer data banks. Moreover, Disney has a ton of existing and extremely popular video content that it has quickly loaded onto its Disney+ streaming service as well as numerous franchises with devoutly loyal fanbases (e.g., Star Wars) that it is leveraging to attract new subscribers.

Competition is clearly beginning to dampen Netflix’s growth momentum, as Q1 of Fiscal Year 2021 showed weak subscriber growth and management issued disappointing guidance for Fiscal Year 2021. Revenue growth appears to have peaked in 2018 at 35.1% and has decreased every year since, with analyst consensus growth targets of 18.9% in 2021 and 15.1% in 2022.

Despite these headwinds, NFLX still possesses a significant head start in the space, giving it a significant edge to leverage in terms of consumer data and network. However, its valuation remains elevated despite a recent pullback in the share price.

The forward EV/EBITDA remains roughly in-line with long-term averages at 33.7x. That said, the Price to Normalized Forward Earnings looks more reasonable at 48.35x given that Netflix is expected to grow Normalized Earnings by a whopping 74.3% this year and 22.3% in in 2022 to $13.12. At the current share price of $599.3, that would put the P/2022 Normalized Earnings at 38.3x.

From Wall Street analysts, NFLX earns a Moderate Buy analyst consensus based on 26 Buy ratings, 6 Hold ratings, and 4 Sell ratings in the past 3 months. Additionally, the NFLX average price target of $599.3 puts the upside potential at 21.14%. 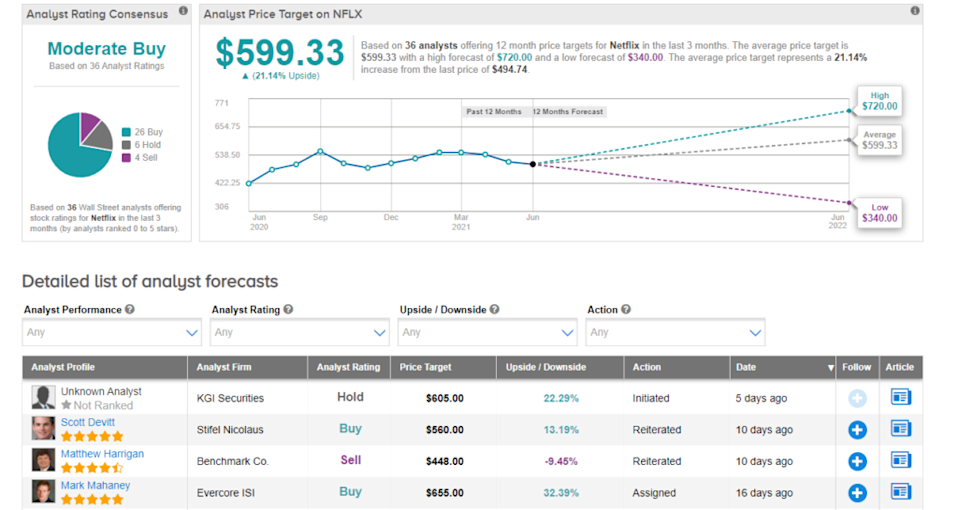 NFLX is facing significant headwinds right now given the entry of several deep-pocketed heavyweight companies into the streaming space. As a result, the company’s growth potential has weakened considerably and its growth rate seems to be in terminal decline.

That said, it still has a lot going for it, with a significant head start in terms of industry-specific consumer data collection and network effect. Furthermore, it already has a foothold in countries across the globe and millions of subscribers that are familiar with and loyal to its content library and style, making them less likely to switch to a competitor.

Overall, the stock does not appear extremely cheap, but could be good buy if the company will deliver on near-term growth expectations and it remains in the double-digits for the foreseeable future.

Disclosure: On the date of publication, Samuel Smith had no position in any of the companies discussed in this article.