It may not be the beginning of the end for Netflix (NFLX) stock. Still, as the content subscription service’s big media and big tech rivals bulk up, the streaming leader now faces additional challenges.

As is well-known, recent headline-making deals in streaming have included the proposed merger of AT&T’s (T) WarnerMedia unit into Discovery Inc. (DISCA), as well as Amazon’s (AMZN) recently-announced purchase of film studio MGM.

This development adds to the ground big media has gained when it comes to its own streaming services. ViacomCBS’s (VIAC) Paramount+, as well of WarnerMedia’s HBOMax are some recent examples. Put them together, and they may start to have a dramatic effect on Netflix’s growth potential, both in the U.S. and in its overseas markets. (See Netflix stock analysis on TipRanks)

So, what could this do to stock price performance going forward? Even with these headwinds, international growth may still be on the table. This could help shares, trading for around $492 per share today, to hold steady. Yet, if this “grow into its valuation” catalyst fails to fully play out, the above-mentioned pressures could weigh down further on shares.

NFLX Stock and The Impact of Big Media Consolidation

How will the recent media deals affect Netflix shares going forward? Sure, as some have pointed out, the Amazon-MGM tie up may do little to affect the streaming space. Even after the still-pending WarnerMedia-Discovery merger closes, this platform will remain at the top of the streaming heap.

Nonetheless, even as it remains the streaming leader, this doesn’t guarantee it will not impact its underlying growth, as well as the future growth of the NFLX stock price, going forward. As the company’s pandemic tailwinds (which helped materially boost results in 2020) fade, the platform’s growth both in the U.S. and overseas is slowing down.

Based on sell-side projections of 2022, growth may still be at a level that allows Netflix to hold onto its current valuation. However, if the recent deal-making and rival streaming services launches result in its actual results falling short, this richly-priced stock could be at risk of pulling back.

Right now, even with the potential risks mentioned above, high growth remains on the menu for NFLX stock going into 2022. Sell-side estimates call for the company’s revenue to grow around 15%, and its earnings to grow around 23.2%, next year.

If it lives up to these estimates, it may be sufficient to help the stock, today trading for a forward price-to-earnings (P/E) ratio of 37.9x, hold steady at its present price levels. Yet, both estimates are far from being set in stone.

Why? Namely, with the pandemic wrapping up, Netflix’s subscriber growth is again falling short of expectations. Fortunately, even with the rising competition, the company’s annual content budget has yet to soar to a point where it threatens earnings growth, if revenue growth comes in less than expected.

With its content costs this year ($17 billion) the same as last year, earnings growth will still be outsized, even if the top grows at a much slower slip. Even so, if earnings fall short of 20%+ growth, it may be enough to contract Netflix’s valuation. Perhaps that will be only a modest correction, but a move down to a forward P/E of 30x would still result in a double-digit decline from today’s prices.

What Analysts are Saying About NFLX Stock 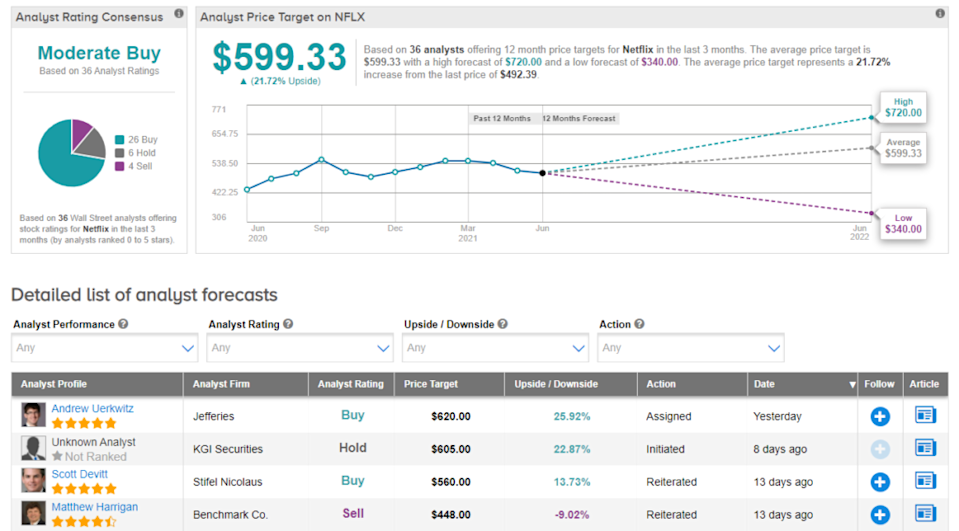 Netflix may remain the leader of the streaming space, but its days of delivering above-average growth may be numbered. As its worldwide subscriber growth slows, top and bottom-line results going forward could fall short of the expectations currently priced into shares.

That’s not to say that NFLX stock is at risk of big declines. Yet, as more investors fear that upside is limited, shares may have a tough time getting back to their highs set earlier this year ($593.29 per share).

Disclosure: Thomas Niel held no position in any of the stocks mentioned in this article at the time of publication.