There’s no other way of saying it: while the coronavirus was a horrible event for almost everyone, it was great for Netflix (NFLX). The global sofa bound population took the opportunity to sign up to the streaming service which saw new subs reach record levels during the height of the pandemic.

But like a good binge series’ first season, last year’s performance has, unsurprisingly, been a hard act to follow. In fact, along with the slowdown of new subscribers, the stock has also underperformed this year, remaining flat and trailing the S&P 500 by some distance.

With Netflix reporting Q2 financials next week (July 20), Canaccord analyst Maria Ripps is anticipating “another quarter of modest subscriber growth,” although her estimate of 1.1 million net adds is just above Netflix’ guide for 1 million new additions.

Ripps thinks investors’ focus will turn to whether this metric can improve in 2H21, and here the analyst believes Netflix is well-positioned to deliver, as in contrast to last year’s lack of new content, the release schedule for this year’s second half is rich with new offerings and should generate a lot of interest amongst content thirsty consumers.

During July, new reality shows and new seasons of “returning favorites” will hit the screens, including Atypical, Virgin River, Never Have I Ever, and teen drama Outer Banks, one of last year’s most popular Netflix shows. All should help “drive a notable uptick in subscriber acquisition.” As such, the 5-star analyst anticipates roughly 14 million net adds in 2H21, compared to the 5 million expected in the year’s first half.

But it is further down the line, in 1H22 and beyond, when some of the streaming giant’s most popular titles will make their return. These include Stranger Things, The Crown, and Ozark, prompting Ripps to sum up Netflix “continues to invest in unique content both in the US and around the world which is helping to strengthen its competitive positioning and differentiate its library from those of rivals.”

So, good news for Netflix and binge lovers, but what does it all mean for investors? Ripps rates Netflix shares a Buy, and his $650 price target implies ~20% from current levels. (To watch Ripps’ track record, click here)

Most of Ripps’ colleagues are of the same mind although not all are on board. Based on 26 Buys, 7 Holds and 3 Sells, the stock has a Moderate Buy consensus rating. The forecast is for 12-month upside of ~12% given the average price target currently stands at $607.03. (See Netflix stock analysis on TipRanks) 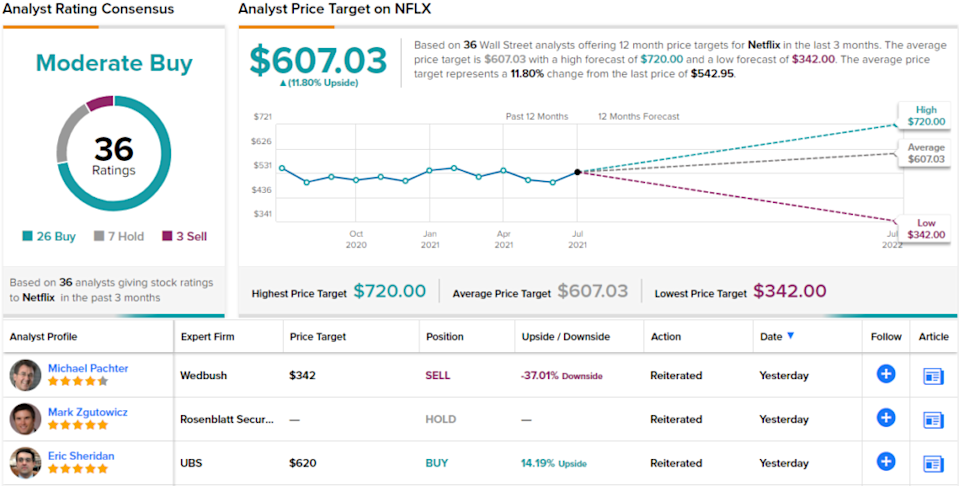