Netflix: A Stock for GARP Investors to Consider

There is a point at which a company is no longer growing at a torrid clip yet is still expected to grow at a more leisurely pace. When a company reaches such a point, it is time to view it in a different light. For Wells Fargo’s Steven Cahall, Netflix (NFLX) has now reached that stage.

“We see NFLX transitioning from Growth to GARP (growth at a reasonable price) as the stock sheds its net add past and re-emerges as an earnings growth company,” the analyst said. “We think bottom-line performance is becoming steady enough that the company could even provide longer-term EPS growth guidance.”

Until recently, as is common for growth-minded companies, Cahall says NFLX's EPS “were immaterial.”

However, like it has done in so many areas, Covid-19 has changed Netflix – mainly due to the “2020 pull-forward of subscribers.” NFLX is no longer “primarily a subscriber story,” says Cahall, but an entity less surprising and more palatable for GARP investors. Which also means that the single most important KPI (key performance indicator)—streaming net adds— is of less importance.

Basically, what Cahall is saying is that there’s a limit to the speed at which Netflix can grow its subscriber count.

“Even if net adds hold steady in the 20-25mm per annum range from here, the math makes annual net adds a decelerating percentage on the growing base,” Cahall explained. “Quarterly net adds are an even less helpful indicator of long-term bottom-line performance on 200-250mm subscribers.”

Not that adding new subs isn’t important, it’s just that Netflix’ model is now “far more multifaceted,” one in which pricing is becoming a “bigger piece of the financial puzzle.”

For example, while streaming revenue growth over the past 5 years was made up of 79%/21% between subs and price, over the next 5 years, Cahall anticipates this will change to 67%/33%.

Summing up, Cahall says he “likes the current entry point,” reiterating an Overweight (i.e. Buy) rating for the stock, along with a $700 price target. Should his thesis play out, a twelve-month gain of ~35% could potentially be in the cards. (To watch Cahall’s track record, click here)

So, that’s Wells Fargo’s view, what does the rest of the Street have in mind for Netflix? Out of 34 recent reviews, 25 are to Buy, 6 to Hold and 3 suggest to Sell, all culminating in a Moderate Buy consensus rating. The average price target stands at $611.27, indicating potential 12-month gains of 18%. (See Netflix stock analysis on TipRanks) 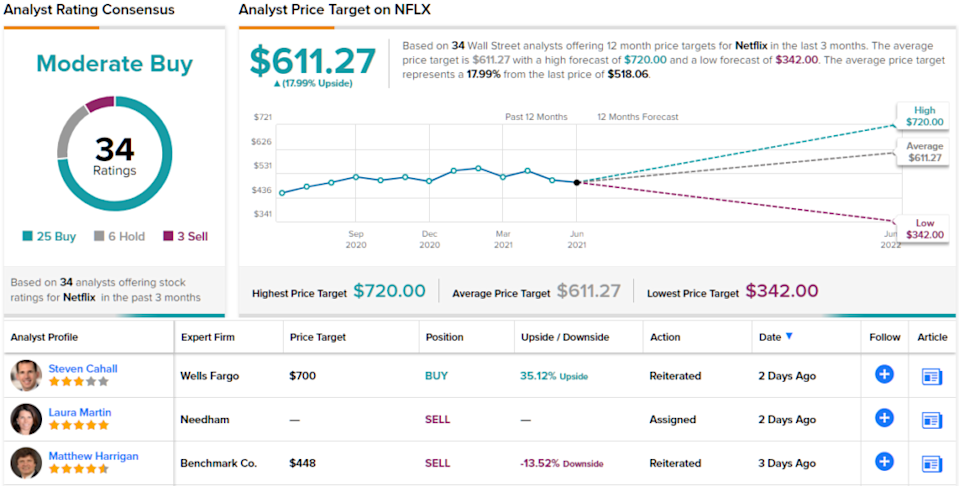