Through the first half of this year, we’ve seen heavy volatility in the NASDAQ; at one point, the tech-heavy index even swung into correction territory. But since mid-May, there has been a sustained gain, on a steeper trend than the NASDAQ has seen recently. And some of the NASDAQ’s giants, dominant tech firms like Apple, Microsoft, and Facebook, have been sharing in those gains. It’s a turnaround from conditions earlier this year, when the tech giants led a retreat.

Investors are moving back into growth-oriented tech stocks after a first half which saw bond yields rise slightly from historic lows and inflationary pressures increase. Stocks are bringing in the most reliable returns, and given the nature of our digital economy, tech stocks are a natural to lead the trend.

It’s a trend that has not gone unnoticed. 5-star analyst Jack Andrews, of Needham, has turned his gaze on the tech sector and found the potential for serious gains. He’s tapped several stocks for double-digit upside, and we’ve used the TipRanks platform to look up two in particular – stocks that Andrews sees growing 80% or better in the near-term. Here are the details, fleshed out with the analyst’s commentary.

We’ll start with JFrog, a software development company that has managed to differentiate itself from the competition in a truly unique way – it pioneered ‘continuous updates,’ allowing software to update invisibly and non-intrusively, adding a new layer of convenience for the end user. JFrog has become the standard in automated release and update management. JFrog’s products, offered across the company’s platform, include software for repository management, security, dev ops, and distribution – and that only scratches the surface.

The company has been in business for over a decade, but only went public in September of 2020. The IPO saw JFrog offer $11.6 million shares to the public, at $44 each – and it finished its first day’s trading at more than $64. The company had set an initial pricing target between $33 and $37 per share; clearly, this was a stock in demand. Overall, the IPO raised over $352 million, per company sources. JFrog has a current market cap of $4.3 billion.

While JFrog, like many peers in the tech business, runs a net loss each quarter, other financial indicators are highly positive. In its three reported quarters since going public, JFrog has shown quarterly revenues of $38.9 million, $42.7 million, and $45.1 million. The company’s operating cash flow in Q1 was $8.8 million, of which $7.7 million was free cash flow. As of the end of Q1, JFrog had over $605 million in available cash.

On June 29, JFrog announced that it had entered to acquire the digital security company Vdoo. The move will bring Vdoo’s continuous security capabilities to JFrog’s platform, for secure operations from development to device. The deal will be conducted in cash and stock, and is worth an estimated $300 million.

Needham’s Andrews sees this move as a key to JFrog’s near-term growth, saying of the acquisition and of JFrog, “In our view, the acquisition delivers deep synergies that allow FROG's existing base to leverage more security features outside the upstream scope of CI/CD. Although Vdoo should have an immaterial impact in the near term and the product's potential uplift was not detailed, we believe the combined solution advances FROG's vision of liquid software delivery by removing security bottlenecks. Moreover, the growing convergence of DevSecOps allows FROG to address a growing range of new personas and markets.”

Andrews rates FROG shares as a Buy with an $86 price target, indicating his confidence in a one-year upside potential of 88%. (To watch Andrews’ track record, click here.)

While Andrews is bullish, Wall Street generally is somewhat cautious on this stock. FROG shares have 8 recent reviews, including 3 to Buy and 5 to Hold; However, the average price target shows the bulls remain in control; at $59.14, the figure implies a 28% upside from the share price of $46.05. (See JFrog’s stock analysis at TipRanks.) 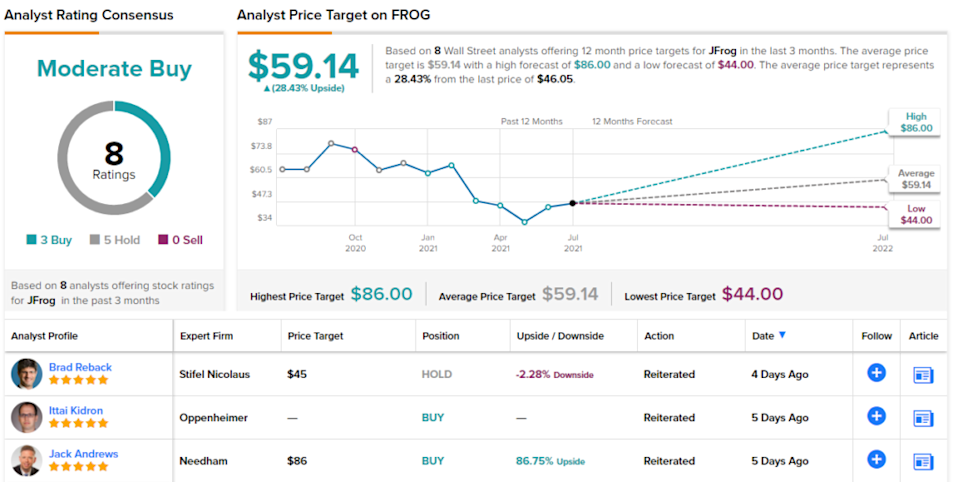 The second Needham pick, C3ai, is another newly public firm, having held its IPO last December. C3ai is, as its name says, an AI firm, providing a set of services and products for the building of enterprise-scaled applications. C3ai software uses AI to improve efficiency, make customer end-use apps customizable, and streamline the development process. The company’s products are applicable to a range of uses, including customer engagement, fraud detection, supply chain optimization, and predictive maintenance.

In its IPO, C3ai put 15.5 million shares on the market – and raised $651 million in gross proceeds. The stock was initially priced at $42 per share – but peaked at $112 during its first day and closed at $95. While the stock has fallen in the past six months, the company still boasts a market cap of nearly $6.5 billion.

The IPO set a high bar for C3ai, and the company’s most recent quarterly report, for Q4 of fiscal year 2021, ending on April 30, cleared it again. Quarterly revenue was up 26% year-over-year, to $52.3 million, supported by a strong gain in subscription revenue, which rose 17% yoy to reach $43.1 million.

For the company’s fiscal year 2021, the results were equally positive. Full-year revenue was a company record, up 17% from 2020 and coming in at $183.2 million. Subscription revenue’s yoy gain of 16% was in-line with the quarterly gain, and the full year subscription revenues were $157.4 million. The company finished the year with a total AI customer count of 89, for an 82% yoy gain.

Looking at C3ai, Jack Andrews sees the company in a strong position for the future, writing, “Our key takeaway is that momentum in the business appears to be accelerating, expansion of strategic accounts continues, and AI progresses on scaling out its unique sales/ partnership model. Importantly, AI reported a substantial acceleration in forward-looking metrics like billings and adjusted RPO, which confirms our confidence in AI's ability to materially accelerate revenue in the near to mid-term. We believe AI's unique solutions, expansive TAM, and veteran leadership could lead to it becoming the default platform for Enterprise AI.”

Andrews puts a $146 price target on AI stock, to back up his Buy rating. At current prices, this target implies a robust one-year upside of 141%.

Once again, we’re looking at a stock that Wall Street is cautious on. Of the 7 reviews on file for this stock, 4 are to Buy, 2 are to Hold, and 1 is to Sell, for a Moderate Buy consensus. The shares are trading for $60.53 and their $101.57 average price target suggests room for an upside of 68% in the next 12 months. (See C3ai’s stock analysis at TipRanks.) 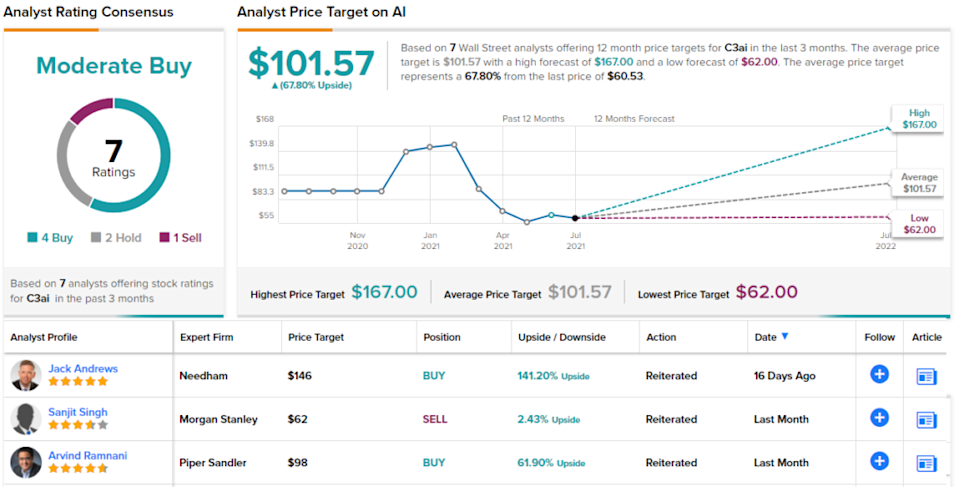