Monitoring the International Flow of Capital 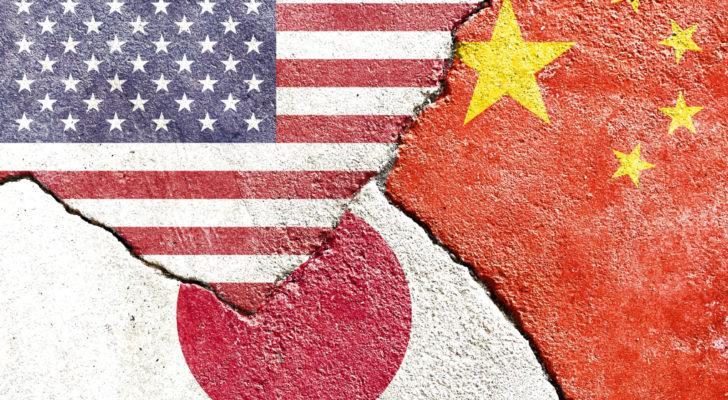 A concept image of the flags of the United States, China, and Japan juxtaposed on concrete slabs jutting into each other.

This article will explain why currency movements in Japan and stock volatility in China can be great warning signs for a potential correction in the U.S. markets if economic data starts to show slowing growth.

A Weak Yen Is Good for Stocks

First, the Japanese yen is back down to its prior lows again following a rally late last week. A weak yen is usually a very positive signal for U.S. stock markets.

If the currency can break to new lows, it would likely indicate there is potential for additional short-term upside for stocks.

It is very cheap to borrow yen and use those funds to buy riskier assets (like stocks) that offer a higher yield. This borrowing effectively weakens the yen.

If the yen is falling in value, investors are likely to continue borrowing because they expect to repay their loans with cheaper yen in the future, which further reduces their borrowing costs.

One of the reasons the market has been so bullish is because the yen has been much weaker than expected.

As you can see in the following chart, a declining yen has even outpaced a historically weak U.S. dollar.

A chart showing the performance of the Japanese yen against the U.S. dollar between 2020 and 2021.

However, we want to monitor this trend very carefully because, if support holds, investors could see that as an early warning signal that some capital may start flowing back out of equities.

As you might imagine, not all the borrowing in yen is directed to U.S. stocks. A lot of it is used to finance stocks and real estate assets in China.

Demand for Chinese assets has driven the Chinese yuan’s value up nearly 12% since the market bottomed last May.

That much volatility in the yuan can cause problems for exporters who are the engines for Chinese growth. A stronger yuan makes Chinese exports more expensive in dollar or euro terms and can impact the Chinese trade surplus.

Although we don’t see a reason to panic yet, Chinese stock indexes are starting to look overheated again and may be near a top.

Prices have benefited from cheap borrowing, but small leveraged investors dominate China’s markets, so it can reverse very quickly if those investors get nervous about increased borrowing costs.

Most U.S. investors do not realize that the relatively skittish Chinese stock traders represent a good bellwether for U.S. stocks and risk appetite among traders more generally.

Over the last few years, if Chinese stock indexes (we have used the Hang Seng index below) form a series of lower highs while the S&P 500 forms higher highs, a correction or bear market is almost certain to be less than eight weeks away.

As you can see in the following chart, the Hang Seng (red line) has formed this double top divergence pattern with the S&P 500 (green line) before each of the last four major corrections.

Currently, we can’t argue that a second lower top has been formed on the Hang Seng yet, but it’s close enough that we should watch it very carefully.

How We Plan to Profit

At this point, we feel that the influence of the Japanese yen and the Chinese stock market indexes on U.S. stocks is still in “neutral” territory.

However, because both markets are close to inflection points, we will be flexible about how we are positioned this quarter.

Right now, that means a slightly reduced focus on tech stocks and a greater emphasis on bullish positions in defensive trades and retail stocks, like our recent recommendations in Coca Cola (NYSE:KO) and Starbucks (NASDAQ:SBUX) short puts this week.

On the date of publication, John Jagerson & Wade Hansen did not hold (either directly or indirectly) any positions in the securities mentioned in this article.

John Jagerson & Wade Hansen are just two guys with a passion for helping investors gain confidence — and make bigger profits with options. In just 15 months, John & Wade achieved an amazing feat: 100 straight winners — making money on every single trade. If that sounds like a good strategy, go here to find out how they did it.

The post Monitoring the International Flow of Capital appeared first on InvestorPlace.