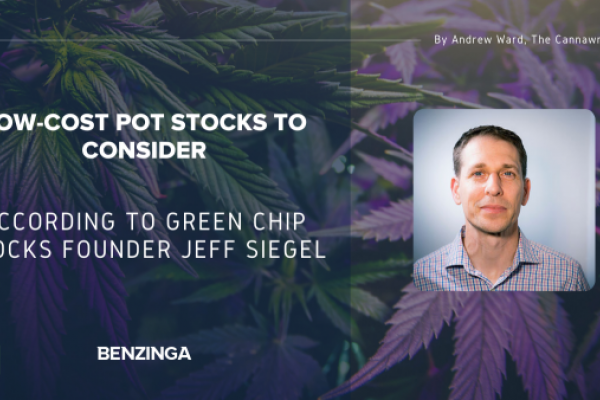 He recently spoke with Benzinga about several possible opportunities in the weed sector that may be of interest to investors, including those with limited funds.

Siegel noted that several cannabis stocks are undervalued in the current market. Of his holdings, he believes MariMed Inc. (OTC: MRMD) and Red White & Bloom Brands Inc. (OTC: RWBYF) provide the "best bang for your buck."

Siegel likes the net asset value, brand exposure and cash on hand of both companies.

Siegel considers MariMed a strong performing brand tripped up by the costly GenCanna hemp deal, resulting in $63 million in write-downs. Despite the significant blow, Siegel

credits the company for restructuring and reorganizing while relying on its vital assets.

He believes Maryland is one market not receiving enough attention, citing its size as a possible reason. But Siegel feels that the state's immense wealth and long-standing cannabis culture should help the market continue to perform well.

Siegel has been a fan of RWB for years now, holding on to the stock as a long-term investment. Like MariMed, he cites the company's presence in critical markets like Michigan, Oklahoma, Arizona and Florida as a standout point.

He cited the company's Platinum Vapes brand as a dominant player in several markets, also providing the company access to markets like Oklahoma. RWB also has an exclusive licensing deal with High Times to retail products in several states.

Siegel is a fan of brands with involved operators putting out what he considers quality products.

He cited Platinum Vapes as one of the brands he enjoys. Another standout cannabis venture he has exposure to is Tical, backed by entertainer and cannabis icon Method Man.

He believes that Tical will be one of the brands to succeed "Because Method Man is actually very involved in terms of ensuring that what they're putting on the shelves is quality." Siegel said the company's commitment to social equity causes further bolsters its credibility.

Don't sleep on the Midwest, according to Siegel. He sees significant players like Michigan and Illinois as promising options for investors. He spoke similarly about more under-the-radar options in the region, including Oklahoma, Ohio and Missouri.

Beyond the Midwest, Siegel views Arizona as a market to consider. After recently traveling a 70-mile stretch of the state, he reported being "impressed" by the design, service, product and staff knowledge of various state operators.

Believing that Arizona's market has yet to be fully realized, he thinks that "Any MSO that's operating in Arizona is in a good place to be."

Siegel said that in his experiences traveling the U.S. markets, he'd seen more enthusiasm for cannabis outside major markets than in hotbeds like New York. "I just thought that was really interesting," he said.