Krispy Kreme (DNUT) on Thursday began its second incarnation as a public company, listing on the Nasdaq under the ticker symbol "DNUT."

Shares of the donut chain priced in at $17 on Wednesday, slightly below the expected range of $21 to $24. Yet the stock popped by nearly 10% in midday trading after a lackluster debut at $16.30 per share.

Analysts had initially seen Krispy Kreme's valuation topping $3 billion, but the stock listing undermined some of the loftier estimates. Still, CEO Michael Tattersfield appeared to be glazing over any doubts about the company's prospects.

"We've been a public company once before and we are now again, we're able to do that," he told Yahoo Finance LIVE in an interview Thursday morning.

In 2016, Krispy Kreme was acquired by the consumer good investment firm JAB Holding Company for $1.35 billion dollars. Now the 84-year-old company is returning to the public market with a valuation of $2.7 billion dollars.

"We think the stock is worth no more than $1.6 billion, which is slightly higher than the $1.35 billion JAB Holdings paid to take Krispy Kreme private in 2016," David Trainer, CEO of New Constructs, an investment research firm.

In a downbeat assessment, Trainer accused JAB of "looking to cash out at the expense of new investors," adding that he doubts the newly-public company will be able to keep up with its peers.

Turning donuts into big cash "looks unlikely given the shift in consumer preferences toward healthier foods and the failure of its past growth strategy to achieve the economies of scale needed to operate profitably," Trainer said.

Yet Tattersfield insisted the company has "transformed its business" since its previous run as a public company, largely by focusing on its its brand and culture at large.

"We really drove an omni-channel to make donuts…following where the customers are," he told Yahoo Finance, underscoring the company's ability to boost revenue and earnings before interest, taxes and depreciation.

In fiscal 2020, Krispy Kreme brought in a net revenue of $1.1 billion dollars, the highest level in its history. The company also sold 1.3 billion doughnuts across 30 countries in 2020.

Confident in its return to the public market, he says since Krispy Kreme was acquired, the business is two and a half times the value that was generated, calling the road ahead a "really tremendous journey" for both its U.S. and overseas operations. 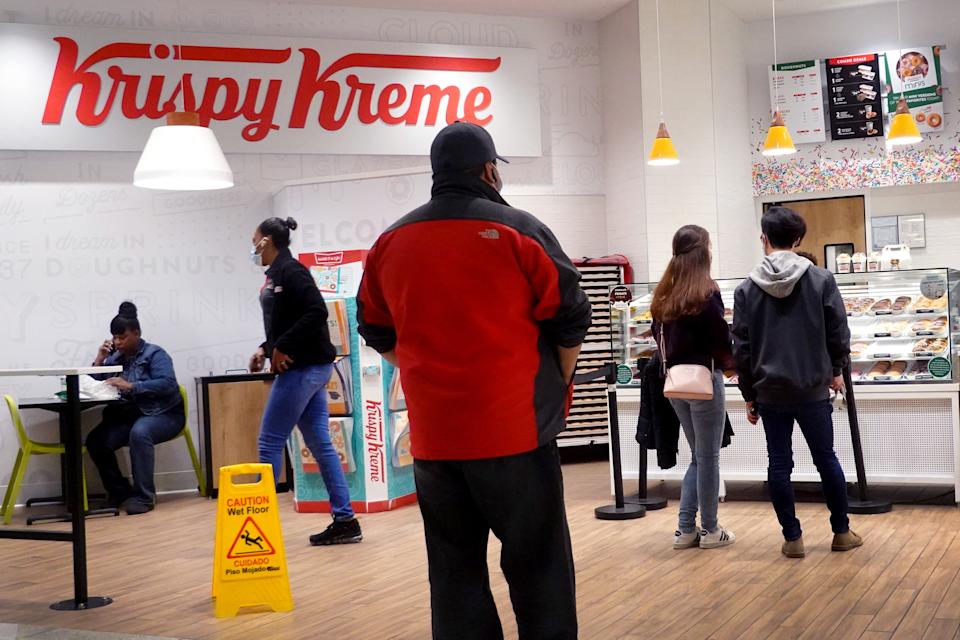 CHICAGO, ILLINOIS – MAY 05: Customers shop at a Krispy Kreme store on May 05, 2021 in Chicago, Illinois. The doughnut chain reported yesterday that it plans to take the company public again. The company was taken public in 2000 but struggled before being acquired by JAB Holding Company in 2016. (Photo by Scott Olson/Getty Images)

In the company's S-1 filing, Kripsy Kreme emphasized the importance of its omni-channel 'hub & spoke' model that aims to maximize "market opportunity while ensuring control and quality" across its products.

Within this model, there are destination spots that the company calls "Hot Light Theater Shops" which provide a customer experience as well as a local production facility.

"We have a little less than 400 Hot Light Shops across the globe…they're special, they produce the donuts," Tattersfield noted.

"Instead of focusing on doing more donut shops, we actually try to figure out how to build an omni-channel to get to where the customers are," he added. That allows for daily fresh deliveries to wholesale select grocers, and select convenience stores within that local area.

The company currently controls 85% of its U.S. donut shops, which he says has "allowed them to really expand the brand and get donuts to where customers are" and has 52 national and international franchise partners, according to its S-1 filing.

Brooke DiPalma is a producer and reporter for Yahoo Finance. Follow her on Twitter at @BrookeDiPalma or email her at bdipalma@yahoofinance.com. Check out her latest: