Shark Tank host Kevin O’Leary was among the first in the investment community to sound the alarm on bitcoin’s sustainability concerns, when he stressed as much, during an interview with Yahoo Finance at the beginning of May. Two weeks later, Elon Musk announced Tesla was reversing its stance on accepting the crypto as a form of payment, citing the same sustainability issues, sparking a 35% collapse in bitcoin’s price for the month.

But now, speaking with Yahoo Finance at the Bitcoin 2021 Conference in Miami over the weekend, O’Leary said what was bitcoin's biggest problem has become its biggest opportunity, predicting that a shift among bitcoin miners to more sustainable forms of energy could propel bitcoin to outperform stocks by a wide margin over the next decade if it can solve its sustainability problem to once again attract institutional investors.

"It's both a huge problem and a massive opportunity, I prefer to look at the opportunity," O'Leary said. "I called it out on that Yahoo Finance interview, and the proverbial poo poo hit the fan. I took a lot of flack, but it's obviously on the mind of the institutional client."

As O'Leary contends, the optics of a fraction of miners using non-renewable energy, like some of China's miners still running on coal-powered electricity, has prevented a number of institutional investors from investing in bitcoin due to fears around ESG, or environmental, social and corporate governance, compliance. Despite the fact that a University of Cambridge 2020 study pegged sustainable miners at about 40% of bitcoin's network and climbing, the stigma attached to the other miners contributing to carbon emissions and global warming remains an ESG overhang.

"At the end of the day, there's a new sheriff in town, it's called ESG. Every single institution, including from Larry Fink on down at BlackRock who put out his ESG letter, his sustainability mandate, this used to be fringe, it's not fringe anymore. You have to be sustainable in terms of how you look at investing, or you're going to lose your investor," he said. 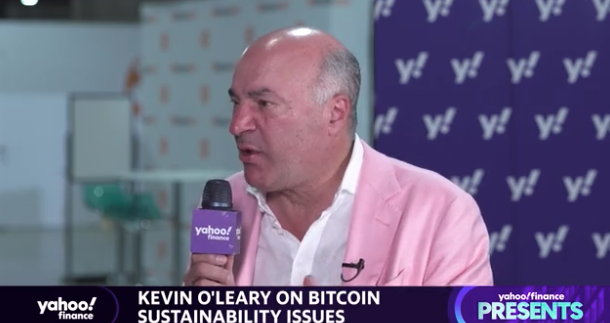 As such, O'Leary has enacted deals with miners who use sustainable forms of electricity, like the large wind farm miners based in Texas, to secure payment in bitcoin that he can prove has been mined sustainably. Other bitcoin advocates have suggested matching bitcoin held in portfolios with carbon credits to offset any potential ESG conflicts.

"I just think that the minute we solve the institutional ESG issue, Katy bar the doors. Because people don’t understand the majority of the world’s investments are in the institutions and the sovereign funds. That’s where the real money is," he said.

As an example of why it matters for bitcoin, O'Leary said the same ESG overhang has put negative pressure on oil companies. Highlighting shrinking price-to-earnings ratios in the space, he says institutional pressure to divest has brought down the price of oil stocks despite a rise in cash flows.

"That’s sustainability committees pushing out the stocks out of mandates out of portfolios … that just gives you the idea of the power of the ESG mandate,” he said. "We need to solve for the institutional client. They want to invest in bitcoin. They can’t right now, it’s a really weird situation."

O'Leary remains optimistic, however, that institutional investors will find a way to get creative to make taking a position work — as he has — and believes that once that hurdle is cleared bitcoin would be back on its way to continue outperforming stocks over the next decade.

Zack Guzman is an anchor for Yahoo Finance Live as well as a senior writer covering entrepreneurship, crypto, cannabis, startups, and breaking news at Yahoo Finance. Follow him on Twitter @zGuz.