Why aren’t workers flooding back to millions of open jobs?

The latest data shows there are 8.1 million jobs available in the U.S. economy, the most since at least 2000. But hiring is weak and the unemployment rate is going up, not down. Many Republicans claim federal unemployment benefits of $300 per week, on top of what states pay, are making it more lucrative for unemployed Americans to collect benefits than rejoin the labor force. At least 22 states—all with Republican governors—are ending the federal jobless benefit early.

But many open jobs appear to pay less than they did before the coronavirus pandemic exploded a year ago, suggesting many workers are really refusing to take lousy jobs. A recent study by Bank of America finds that the average pay of open jobs is lower than before the pandemic in 12 of 15 sectors. Pay is up in 2 sectors and flat in 1. The data comes from research firm Revelio Labs, which uses algorithms to scrape data from job-posting sites such as Monster and Indeed.

On average, the pay for posted jobs is 5% lower than the average for 2019, which Bank of America uses as a baseline for pre-pandemic wages. The biggest drop is in retail trade, where the average pay of posted jobs is 21% lower. The next biggest pay drop was in professional and business services, down 14%, followed by a 12% drop in transportation. Pay for open jobs in information, which includes many tech positions, rose by a startling 38%.

This is a different story from what the government’s wage data shows. Average hourly earnings are up nearly 6% from pre-pandemic levels. But that’s for people with existing jobs, not what companies are offering for newly posted jobs, and it’s artificially high because many of the 8.2 million jobs lost in the last 14 months are in the lower-income retail and hospitality industries. When lower-paid workers disproportionately left the labor force, average wages jumped, creating the mirage of prospering workers, suddenly better off.

The drop in offered pay for open jobs suggests there’s a lot more slack in the labor force than other data does: Businesses can’t be that desperate for workers if they’re offering lower pay than they were 18 months ago. Some big employers, such as Amazon, Costco, McDonald’s and Chipotle, have said recently they’re raising pay to draw needed workers. But if offered pay is below pre-pandemic levels in most industries, that means many smaller companies are not following suit.

To some extent, big pay declines are intuitive. The retail sector suffered badly as many businesses had to limit operations or shut down last year, so it would make sense that pay would be depressed as the industry tries to bounce back. Retail businesses that suffered losses may also be paying less by necessity, or seeing if they can shave labor costs while they get back on their feet. 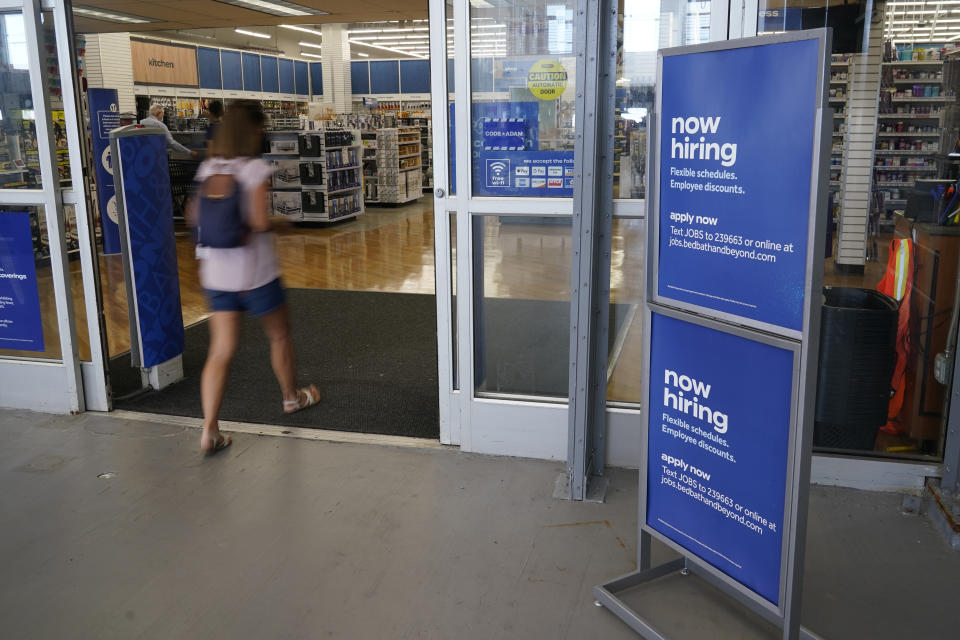 A sign looking to hire employees is displayed at the entrance to a Bed, Bath and Beyond store, May 4, 2021, in Miami. (AP Photo/Marta Lavandier)

Industries with the biggest drop in employment, however, haven’t endured the biggest drops in pay. Education services, for instance, lost the second-largest portion of jobs, with a 17% decline from February 2020 through April 2021. But the average pay of posted jobs is the same as pre-pandemic levels, for a 0% change, the second-best performance. That’s probably because of the high portion of unionized teaching jobs and unions’ ability to keep wages up.

The biggest drop in jobs was in arts and entertainment, with a 25% decline, while pay for new jobs has fallen 9%. The hotel and restaurant industries have seen a 16% drop in employment, and a 4% drop in pay for advertised jobs. Cause and effect can be tricky to ascertain, but part of the reason for depressed pay in these fields is probably a glut of workers.

Workers have 'a different set of expectations'

Businesses may also be testing if they can hire people for less than before. “Demand for labor involves quantity and price,” says Ben Zweig, CEO of Revelio Labs. “If people want to work but firms aren’t willing to pay for them, I don’t think you can call that strong demand. Firms may think there’s such a glut, they can basically take their pick of workers, for low wages. Employees may have a different set of expectations.”

Bank of America points to improving trendlines in pay as a sign of labor market healing. In industries such as businesses services, education, hotels, restaurants and the red-hot real estate sector, pay levels for open jobs have improved substantially from the nadirs of last year, even if they’re still below pre-pandemic levels. “We see good reason for wages to rise in coming months,” BofA concludes.

Zweig says federal unemployment benefits might add some “friction” to the labor market, since it would be rational for some workers to choose government checks over a job, if they amount to more money. But the federal benefits expire in early September, and state jobless aid expires too, after 26 weeks in many cases. Many workers can’t risk waiting till benefits run out to start looking for work. Some jobless Americans have told Yahoo Finance they want to go back to work but can’t find jobs that pay enough to cover their bills.

The Republican governors canceling federal unemployment benefits for their citizens are setting up an experiment in what is really keeping people from going back to work. When the federal jobless aid expires for everybody in September, it will level the field between states that cut off aid and states that didn’t. Economists will be able to study if Republican states that cut off aid ended up with faster growth in output, employment and wages, which would suggest jobless aid did, in fact, keep people from working. But it’s also possible those Republican governors, by cutting off aid, will force some workers back to low-paying jobs that don’t finance a decent living or help people get ahead. Workers, alas, are the lab rats.