Jet Fuel Demand Poised For A 30% Surge During Summer

The air travel industry is at a critical inflection point. Steady vaccination rollouts and falling infection rates in most Western economies are allowing commercial travel to resume after more than a year of downtime. Rebooked holiday trips, postponed family reunions, meeting newborn kids, weddings, attending memorial services for loved ones are the new norm– All that pent-up travel demand is expected to trigger a 30% surge in jet fuel demand during the summer compared to first quarter levels.

Yet, jet fuel remains one of the biggest weak links in the bullish oil thesis, with a full recovery of aviation fuel demand to pre-pandemic levels not expected to arrive until 2023.

According to the International Energy Agency (IEA) summer air travel activity will mainly be dominated by short-haul flights, which are expected to account for almost two-thirds of the total fuel used by the sector. Unfortunately, this category of flight, on average, uses ~35x less fuel than long-haul flights.

"You see the passenger numbers are recovering, but they are flying shorter distances, so the relationship between the passenger number and the jet fuel demand is distorted. For the full recovery, we need international travel to recover as well, and for that we have to reach a certain level of vaccination, not just in a couple of countries," Cuneyt Kazokoglu, head of oil demand analysis at FGE, has told Reuters.

According to the U.S. Energy Information Administration(EIA), jet fuel demand is projected to reach 1.47 million barrels a day during the third quarter, up from 1.13 million in the first quarter and more than 50% higher than a year earlier.

Global jet fuel demand is expected to clock in at 5.8 million barrels per day (bpd) in the current year, almost 30% higher than 2020 levels, but well below the 8 million bpd of 2019 before the pandemic struck. 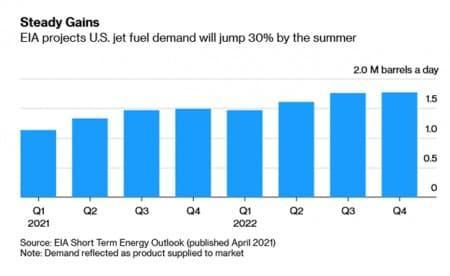 Despite the ongoing buzz, there is a huge disparity in flight bookings, with many countries with successful vaccine programs remaining reluctant to allow unlimited travel.

Last month, Britain allowed international travel to resume from May 17 but has limited the number of destinations open for quarantine-free holidays to 12 countries.

U.S. passenger numbers have been surging while those in India and Japan have been falling. According to the TSA, traveler throughput in the United States on 6th June 2021 clocked in at 1.67 million compared to 942,000 at the beginning of the year. However, that number is considerably lower than 2.27 million recorded a year ago.

Meanwhile, China stands out as its flight capacity has even exceeded pre-pandemic levels.

Unfortunately, the same cannot be said about business traffic.

While domestic leisure traffic is nearly back to 2019 levels for many U.S. airlines, business traffic remains nearly 80% below pre-pandemic levels, a major factor holding back a broader rebound.

Related: NNPC: Lack Of Investment Could Push Oil To $200

For example, even with the added flights for June, bookings at United Airlines Holdings Inc. will still be at just 67% of its domestic schedule compared with June 2019.

Although the average price of a gallon of jet fuel has increased 80% since a year ago to $1.79, a lack of “higher-quality traffic,” is leading to lower overall margins and a slower recovery for the industry due to low fares.

Wall Street continues to be largely bullish on the oil sector, with some analysts saying that $80 per barrel in the summer is now in the crosshairs.

John Kilduff of Again Capital has predicted Brent to hit $80 a barrel and WTI to trade between $75 and $80 in the summer, thanks to robust gasoline demand. Brent is currently trading at $71.63 per barrel, while WTI is changing hands at $69.13.

Unleaded gasoline was selling at $3.07 per gallon on average Thursday, more than 50% higher than a year ago, according to AAA.

"Demand is ramping up very quickly because everybody's driving, and we have the reopening of Europe, which is really starting to happen, while India seems to have hit an inflection point, in terms of cases, which in my mind could mean you also get a return of mobility," Francisco Blanch, global commodities and derivatives strategist at Bank of America, has told CNBC.

Oil prices have continued to rally with WTI trading at $70.31 per barrel on Thursday morning while a barrel of Brent is changing hands at 72.62, levels they last touched in 2018.

Although the rally appears to be running out of steam, the oil bulls remain confident in the demand outlook with accelerating vaccinations allowing people to travel more. Meanwhile, the technicals appear to be on their side: The Middle Eastern Dubai benchmark is trading in its strongest backwardation in almost a year–a good indicator of supply tightness.