Activision Blizzard (ATVI) stock has been on quite the wild ride over the past year. With a historic economic reopening underway, one of the better-known lockdown stocks has now ground to a halt. The stock failed to break the $100 mark back in February and is currently treading water in the $90 range, even after posting yet another strong quarter. (See Activision Blizzard stock analysis on TipRanks)

Many people will head back to the physical realm as they return to normalcy after months of staying indoors, where they were entertained by video games, streaming content and the like. That said, it’s likely a mistake to throw in the towel on Activision Blizzard as lockdown stocks sour. ATVI stock is not necessarily at risk of surrendering its 2020 gains, as many growth stocks seem to be doing these days.

That's because Activision Blizzard has a fresh slate of new titles that are likely to keep its players engaged well into the post-pandemic era. Many new gamers that the company won over during lockdowns will probably stick around well after this pandemic is over.

Additionally, with its pipeline of widely anticipated next-generation titles— including Diablo 2 Resurrected, Diablo 4, Overwatch 2, and the new Call of Duty game—expected to gradually trickle in over the next few years, investors should not discount the possibility of another blockbuster hit for Activision Blizzard.

Given the popularity of its games, Activision Blizzard’s userbase may prove to be far stickier than investors are expecting, especially as the company moves into the next console era.

Gamers are eagerly awaiting the switch to next-generation consoles. Thanks to the semiconductor shortage and unprecedented demand for these consoles, the Playstation 5 (PS5) and Xbox Series X upgrade cycles appear to have been delayed. Furthermore, both new consoles remain light on big-budget next-generation titles.

This is an issue that is expected to resolve in time, though. Moreover, Activision Blizzard is a proactive company that will likely step up to the plate and serve investors and gamers with something to get excited about.

Certainly, pandemic tailwinds are poised to fade for Activision Blizzard and the broader videogame scene. But with numerous catalysts to look forward to, including the wider adoption of new-generation consoles, Activision Blizzard should be viewed as one of the more resilient lockdown beneficiaries.

The company seems to be in a unique and enviable position to further build upon the tremendous momentum garnered during COVID-19 lockdowns, as a different slate of tailwinds come into effect post-pandemic.

According to TipRanks’ consensus analyst rating, ATVI stock comes in as a Strong Buy. Out of 16 analyst ratings, there are 16 unanimous Buy recommendations. 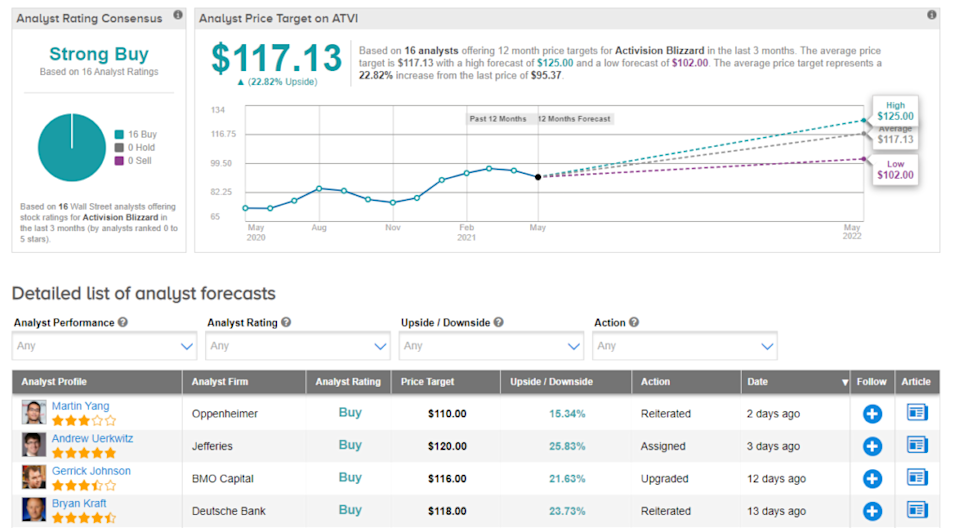 For the first quarter, Activision Blizzard reported 27% revenue growth and 40% non-GAAP EPS growth, both of which handsomely beat the company’s own guidance.

These impressive numbers were fueled by the pandemic-induced stay-at-home boom. That said, it is worth noting that management has raised its full-year guidance, despite the less favorable year-over-year comparisons ahead.

Management cautioned investors that coming second-quarter year-over-year comparisons are going to look weak. At this juncture, mild coming quarters are to be expected.

If any quarterly disappointments send shares lower, long-term investors might have an opportunity to capitalize on weakness, as the most meaningful revenue growth from the name will most likely occur in 2022 and beyond.

Disclosure: Joey Frenette owned shares of Activision Blizzard at the time of publication.