Clean Energy Fuels (CLNE) was ahead of the pack in laying the groundwork to deliver renewable natural gas (RNG) at scale. The company built a network of filling stations and the attendant infrastructure and now with more than 540 locations in 39 states – over 200 in California – it is the U.S.’s largest CNG (compressed natural gas)/LNG (liquified natural gas) station network. At the end of last year, it counted more than 1,000 fleet customers operating over 48,000 vehicles.

Evercore’s Todd Firestone calls the company an “RNG downstream leader with all the right partners.” The list of collaborators is impressive and includes Total, BP, CVX, and AMZN.

As RNG scores well ahead of any liquid substitute, Firestone also believes the company is poised to capture “not only RNG demand growth but also benefit indirectly from the subsidy advantages for the fuel relative to liquid alternatives.” Moving forward, Firestone sees this as a key issue, especially as capacity comes online and “pressures” RIN and LCFS credit markets, which still hover close to all-time highs.

That said, although Firestone prefers RNG economics compared to liquid biofuels, the problem from an investment perspective is that relative to other energy providers, companies in the RNG segment have “crept increasingly high.” And that includes Clean Energy.

While the share price has pulled back significantly from the mid-February peaks, the stock is still “trading near 20x forward EBITDA,” which already supposes the deal to supply RNG to Amazon’s delivery fleets is a success and so are the CVX and Total station expansions.

Moreover, as Clean Energy is not a producer of RNG, Firestone, despite liking the company, is uncertain “how the economics of the subsidies impact the bottom line.” As such, the analyst says the company more resembles a “traditional transport fuel provider with built-out infrastructure.”

“We think CLNE deserves a premium valuation,” the analyst summed up, “We just believe it should be as large as it is on expansion estimates particularly given where other ‘growth’ energy companies have traded in the past.”

Accordingly, Firestone initiated coverage of CLNE shares with an Underperform (i.e., Sell) rating and $11 price target. Interestingly, however, that price target suggests shares will rise by 17% over the next 12 months. (To watch Firestone’s track record, click here)

The picture doesn’t get any clearer when looking at the consensus breakdown; Based on 1 Buy and 2 Sells, the stock has a Moderate Sell consensus rating. However, the average price target clocks in at $10.50, implying shares have ~39% upside potential in the year ahead. It will be interesting to see whether the analysts upgrade their ratings or reduce price targets over the coming months. (See CLNE stock analysis on TipRanks) 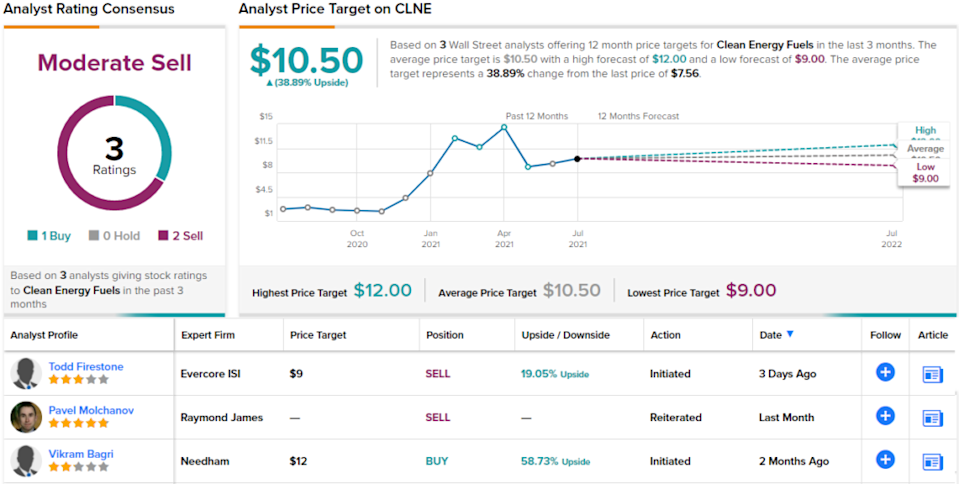