Amazon (AMZN) officially has a CEO not named Jeff Bezos as of Monday (it's Andy Jassy), but a stock price that's acting like it normally does: moving up and to the right.

Shares of the tech beast have surged 14% to $3,642 in the past month in the lead-up to Jassy assuming the CEO mantle from the soon-to-be astronaut Bezos. As of Tuesday afternoon trading, Amazon's ticker page was the most trafficked on the Yahoo Finance platform — beating out Didi (stock down 21% after a China crackdown on the newly public ride-hailing platform).

The surprising upward momentum in Amazon's stock in the face of Bezos stepping aside has some veteran strategists calling attention to the potential for a big upside breakout.

"The new CEO has just taken over for Jeff Bezos and the stock has responded nicely over the past few days. This now has the stock testing the upper bounds of the sideways range it has been in for almost a year now," explained Miller Tabak chief markets strategist Matt Maley. "Therefore, if (repeat, IF) it can break above the top end of that range (at about $3,550) in any meaningful way, it’s going to be VERY bullish for the stock. Given how well other mega-cap tech stocks have been acting recently, it should be bullish for other names as well," he added.

Amazon's stock is currently trading above the top-end of the range Maley outlined.

Amazon is the best-performing mega-cap tech stock of the past month, per Yahoo Finance Plus data. Shares are up 14% during that span, out-performing Apple (+12%), Microsoft (+10%), and Facebook (+6%).

To be sure, the stock stock is a solid vote of confidence on the direction of Amazon under Jassy.

Jassy joined after Amazon’s IPO in 1997 and has built the AWS business up from the ground floor over nearly two decades. He is seen internally at Amazon as having the same demanding leadership style of Bezos and his keen sense of detail.

"We just don't really think you are going to see any major strategic or operational shifts with Amazon with this transition from Jeff Bezos to Andrew Jassy," said Loop Capital analyst Anthony Chukumba said on Yahoo Finance Live.

Chukumba has a Buy rating and $3,775 price target on Amazon.

Added Chukumba, "If it ain't broke, don't fix it. With these record numbers that we are seeing from Amazon pretty much quarter after quarter, why would it make any sense for Andy to make a change in strategy." 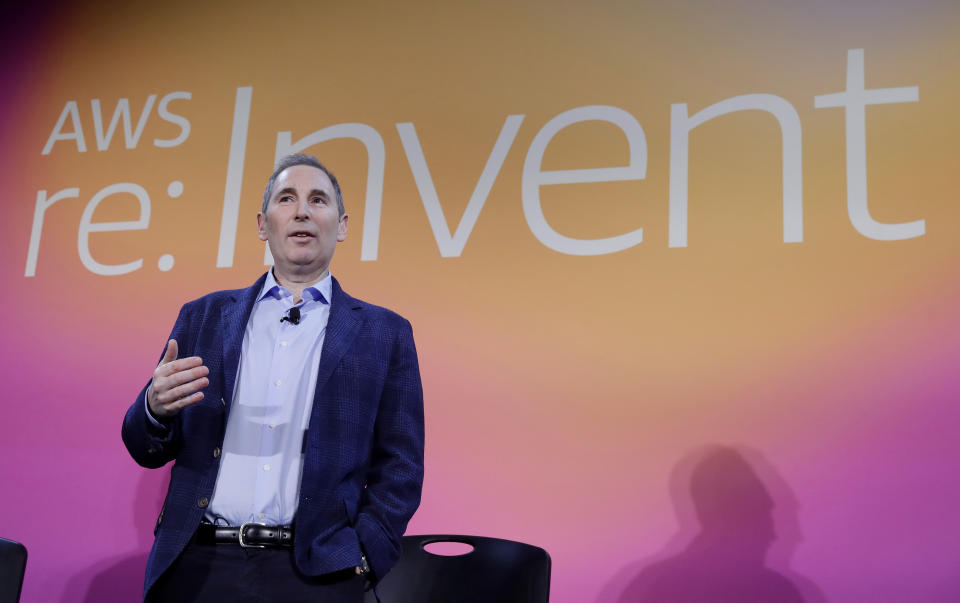 FILE – In this Dec. 5, 2019, file photo, AWS CEO Andy Jassy, discusses a new initiative with the NFL during AWS re:Invent 2019 in Las Vegas. Amazon announced Tuesday, Feb. 2, 2021, that Jeff Bezos would step down as CEO later in the year, leaving a role he’s had since founding the company nearly 30 years ago. Amazon says Bezos will be replaced in the summer by Jassy, who runs Amazon’s cloud business. (Isaac Brekken/AP Images for NFL, File)