Is Alibaba Stock a Buy Right Now? This Is What You Need to Know

Some of the mega-caps have underperformed the market this year, but none have had it as hard as Alibaba (BABA). Shares sit 14% into negative territory in 2021, as the company has engaged in various scuffles with Chinese regulators from which the stock has yet to fully recover.

With the June quarter now behind us, Nomura’s Jialong Shi thinks the company is also suffering due to last year’s post-pandemic economic recovery in China and believes the quarter amounted to a “light period” due to several factors.

“First, the year’s June quarter had a high base to compare as the ecommerce growth last year was fueled by post-pandemic pent-up demand as well as consumer coupons granted by many local municipalities to boost consumption,” the 5-star analyst said. “Secondly, in light of increased regulatory scrutinies, industry leaders like BABA could be increasingly cautious this year in marketing and promotion spends, and this could dent its growth.”

China’s e-commerce market growth is also showing signs of deceleration. The growth rate hit 16% in April yet only reached 10% in May.

As such, while Shi expects Alibaba’s total revenue in 1QFY22 to grow by 33% year-over-year to CNY204 billion, the figure is 5% beneath the latest consensus estimate of CNY215 billion. The analyst also thinks consolidated EBITA could decline by 10% from the same period last year to CNY41 billion, just under the Street’s forecast of CNY42 billion.

The below-consensus revenue projection is due to last year’s acquisition of one of China’s largest supermarket chains Sun Art. China has experienced a massive uptick in online grocery shopping which Shi says is impacting the retail supermarket business.

Consequently, the “sluggish” offline supermarket sales could see revenue for the company’s new retail segment fall by 13% quarter-over-quarter to CNY52 billion, which is also below the Street’s forecast of CNY62 billion.

All in all, however, there’s no change to Shi’s rating which stays a Buy, or price target, which remains at $285. Upside potential from current levels is 42%. (To watch Shi’s track record, click here)

Looking at the consensus breakdown, barring one Hold, all other 26 recent reviews are to Buy, naturally culminating in a Strong Buy consensus rating. The average price target is a bullish one; at $298.33, the figure suggests 12-month gains of ~49%. (See Alibaba stock analysis on TipRanks) 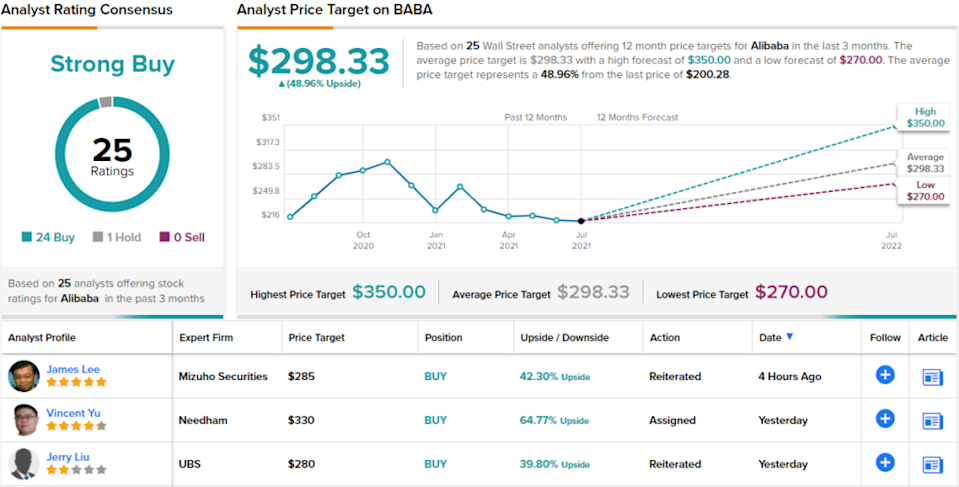