Is a Taper Tantrum Coming?

The market digests the FOMC meeting… have we sidestepped a Taper Tantrum?… all eyes on Jackson Hole… the status of the 10-Year Treasury yield

The S&P 500 is slowly threatening a true breakout from the consolidation it has been stuck in for 41 trading days (nearly two months).

From a technical perspective, the breakout should still be considered fragile.

Below, we see what they’re referencing. I’ve added channel lines to help highlight the S&P’s price-action over recent months. It appears the S&P wants to break out of its two-month trading-range, but it can’t quite hit lift-off…especially in the wake of the Fed’s meeting on Wednesday. 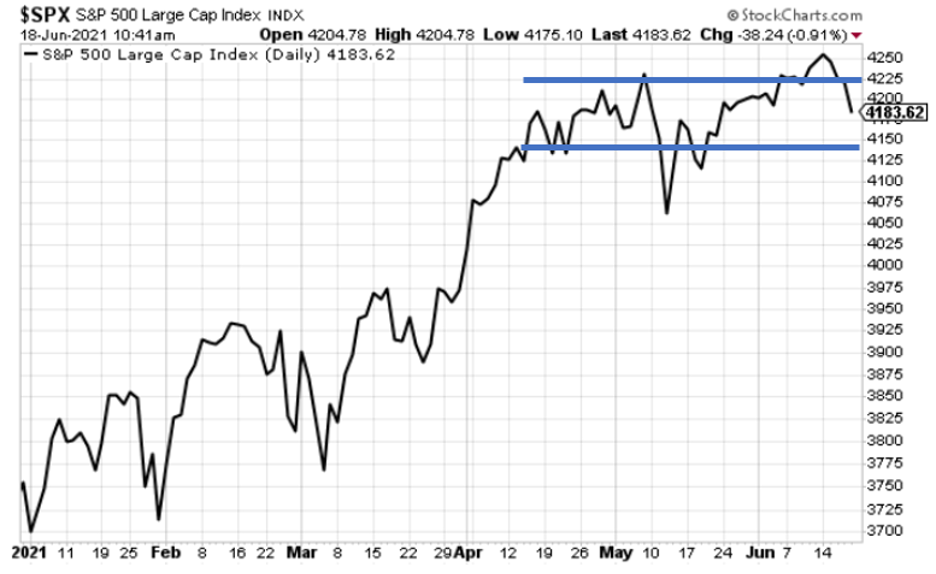 So, what’s going to happen here?

That’s the question John and Wade tackled in their Wednesday update.

Regular Digest readers know that in recent months, we’ve frequently turned to our Strategic Trader team in our Friday issues. Their short- and medium-term technical indicators have helped us navigate what’s been a challenging year so far, with rising yields, surging inflation, and general jitters resulting in a volatile market.

In today’s Digest, we’ll see how John and Wade are sizing up the potential for a breakout in the S&P, as well as the risks of another Taper Tantrum.

Lots to cover, so let’s jump in.

***The latest indicator John and Wade are watching for clues

For newer readers, John and Wade are the analysts behind Strategic Trader. This is InvestorPlace’s premier trading service combining options, insightful technical and fundamental analysis, and market history to trade the markets in all sorts of conditions.

In recent weeks, John and Wade have provided us a series of indicators to help shed light on what’s coming for the markets. We’ve looked at the 10-Year Treasury yield, the Japanese Yen, the Chinese Hang Seng, and most recently, the Baltic Dry Index.

On Wednesday, John and Wade highlighted another one – the Dow Jones Transportation Index.

We will feel much more confident (about a positive breakout in the S&P) once the Dow Jones Transportation Index and small-cap stocks provide confirmation by forming their own higher highs.

As you can see in the following chart, the stochastics indicator confirmed a bullish divergence on the transportation index on Tuesday, which is a good sign that momentum will pick up. 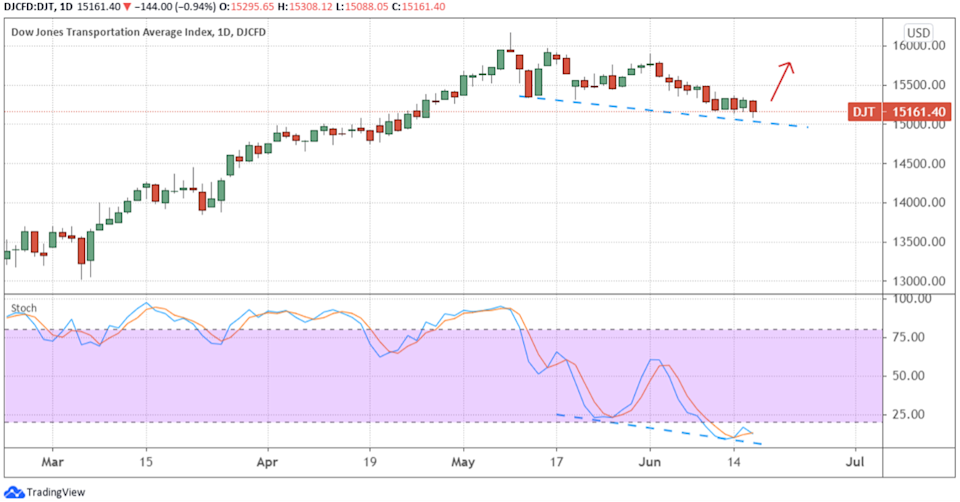 Historically, if transportation stocks and small-caps break to new highs with the S&P 500, the likelihood for a rally of 7% or more reaches 80%.

However, lack of confirmation from these other two sectors reduces the odds to a coin flip.

John and Wade published their update on Wednesday. Since then, the index hasn’t gone the way we wanted.

Below, you can see it falling sharply over the last several days (circled). 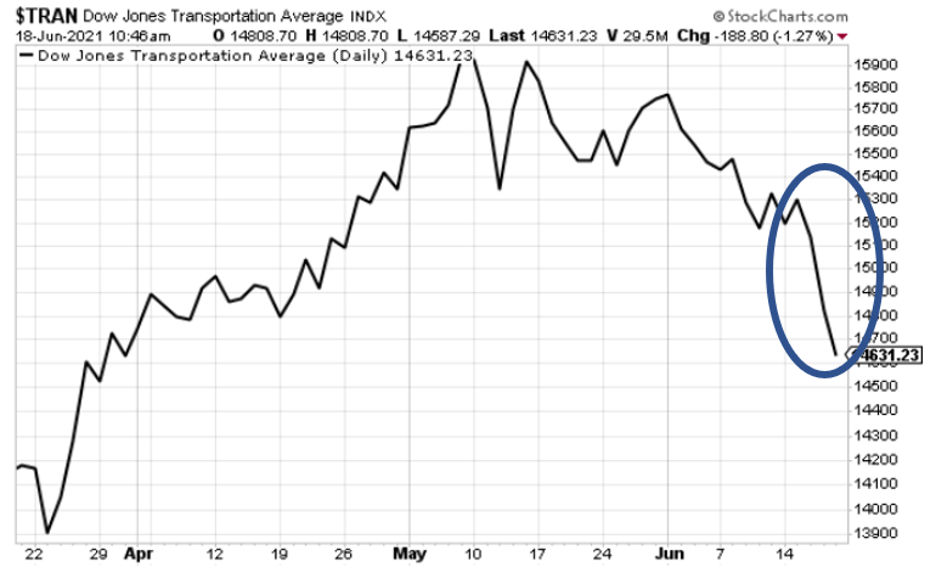 Small-cap stocks also have broken to the south. You can see this in the chart below of the iShares Russell 2000 ETF. 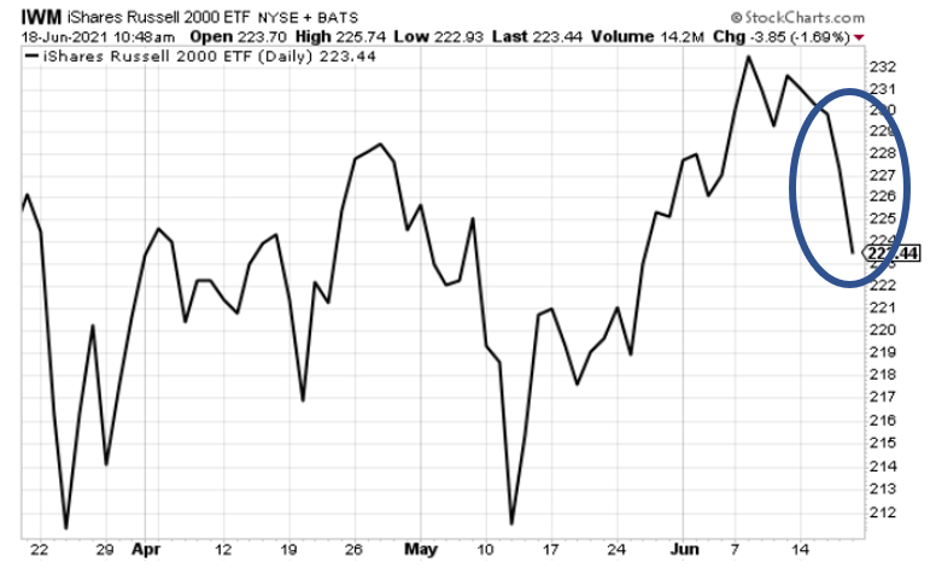 Now, this doesn’t mean the market is about to roll over. Rather, it’s just not the upward breakout we wanted. It suggests more channeling action rather than a bullish surge.

The far-more impactful influence on the market in the coming months is the Fed and how it handles its bond-buying program.

***Have we avoided a Taper Tantrum?

The biggest threat to stock prices at this point is likely how the market will interpret the Federal Reserve’s comments (Wednesday) about monetary policy.

What everyone is worried about are any hints that the Fed may pull back its bond-buying program (quantitative easing) this summer.

As expected, Fed Chairman Jerome Powell made very vague and careful comments about when the pace of bond purchases would start to slow.

Although the Fed statement included a projection for two interest-rate hikes by 2023, the bond-buying program will continue until “substantial further progress” has been made in employment.

There could still be a delayed reaction to the statement, but it looks like a taper crisis has been averted for now.

To make sure we’re all on the same page, the taper crisis John and Wade are referencing is the “Taper Tantrum” of 2013.

In speaking before Congress, then-Fed-Chairman, Ben Bernanke, made comments about the slowing of bond-purchases that were helping support the market in the wake of the financial crisis.

Wall Street didn’t take it well, resulting in the eponymous tantrum that dropped the market by 7%.

(Wednesday’s) statement said the bond-buying program would continue for now with an indefinite end, so at this point we don’t anticipate any issues.

Despite John’s and Wade’s comments, as I write Friday, the markets aren’t happy, with the Dow leading declines at 1.5% down. Perhaps not a full-blown taper tantrum, but more of a preemptive taper whine.

***Planning for the end of the bond-purchase program

Even though the Fed was vague about when it might end its bond purchases, the writing is on the wall.

For example, when asked about tapering, Powell said:

You can think of this meeting that we had as the ‘talking about talking about’ meeting, if you’d like. I now suggest that we retire that term, which has served its purpose.

This puts all eyes on Jackson Hole later this summer.

From John and Wade:

Big shifts in monetary policy are commonly announced in August during the Financial Symposium in Jackson Hole, Wyoming, and if economic growth is still strong, the Fed will have to start saying something about bond purchases.

So, if Powell does finally give a nod toward a taper in August, what will that mean for the markets, and how should we position ourselves?

Here’s where the Taper Tantrum of 2013 can offer us a roadmap.

From the Strategic Trader update:

Although the 2013 “tantrum” was over quickly, it affected stocks that are valued based on their dividends profoundly.

The issue for dividend-payers is that if the Fed stops buying bonds at the current pace, interest rates are likely to rise.

Dividend-paying stocks are a lot like bonds in that the value of the shares is partially an inverse function of the direction of interest rates. In other words, bonds and dividend-payers drop when rates rise.

John and Wade point out that, though a taper would be bearish for stocks that are valued largely based on income, it would be bullish for financial stocks.

For example, following the 2013 tantrum, Bank of America stock doubled in 10 months.

***Finally, what about the 10-Year Treasury yield?

Here’s where we get some good news…

As we’ve pointed out here in the Digest, the yield on the 10-Year Treasury is a major barometer for how traders are feeling about the market and inflation-risk.

John and Wade have identified the key support level of 1.47% as the line-in-the-sand to watch:

If the (10-Year yield) can break support at 1.47%, it would be a good indication that investors are holding off on making any big adjustments for rising inflation.

On Wednesday, after the Fed’s decision, the 10-Year yield jumped about 8 basis points – not what we wanted.

However, yesterday and continuing today, we’ve seen the yield collapse, as you can see circled below in the one-week chart…

As I write Friday around lunch, it’s sitting just below the key support level at 1.457%. This is great news, and we’ll be watching to see if it keeps dropping.

Bottom-line, the taper is coming. Though not referenced explicitly on Wednesday, the Fed is no longer “talking about talking about it.”

I’ll give the final word to John and Wade with what their plan is going forward:

If investors start pricing in a taper, we will likely want to rebalance our focus further towards strong financials and a little less on tech and income.

At this point, though, we don’t recommend making any changes to our current mix until we see how the market digests the Fed’s statement and we get a little closer to earnings season in July when we will have a better idea what the Fed is likely to do in August.

The post Is a Taper Tantrum Coming? appeared first on InvestorPlace.