The IPO market set another record amid a landmark quarter for Q2 2021, according to a report published by Renaissance Capital — 113 IPOs raised $39.9 billion in Q2, marking the “busiest quarter for IPOs in over two decades."

“After a strong start, weaker market conditions dampened activity mid-quarter, before IPO performance and new issuers roared back in June, the busiest single month since August 2000,” the report added.

Though the health care sector—currently dominated by biotech—led IPO activity with 46 IPOs in the quarter, the technology sector raised the majority of proceeds amid the individual sector’s busiest quarter in at least two decades with 42 IPOs. Software and e-commerce represented over half of new tech issuers, with the quarter’s largest IPO coming from Chinese ride-hailing giant DiDi (DIDI). Health care saw several billion-dollar valuations, with the largest in the sector coming from Lyell Immunopharma (LYEL) which became the second-largest preclinical biotech IPO ever. 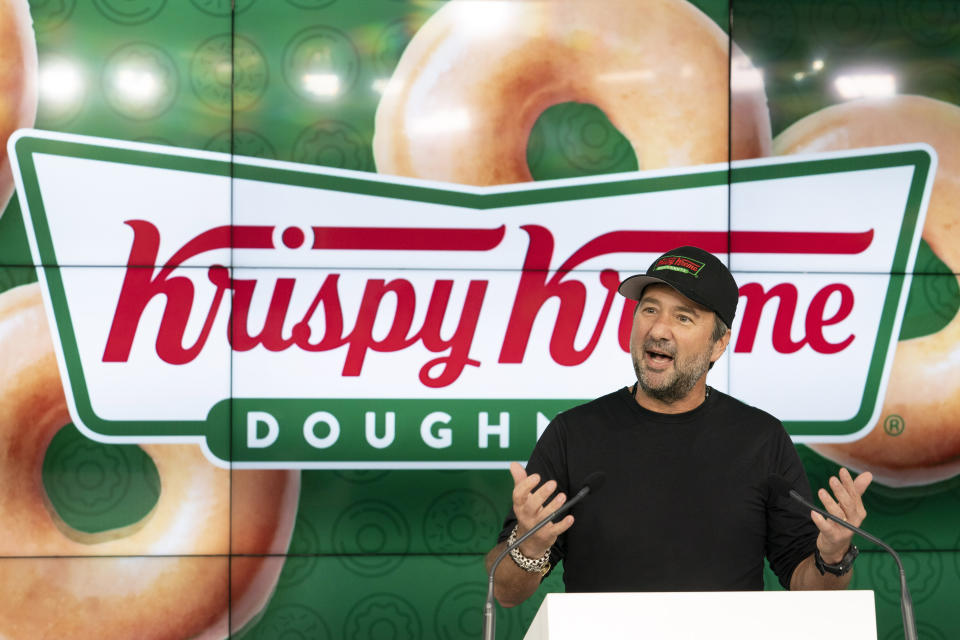 Krispy Kreme CEO Mike Tattersfield talks during the company’s IPO at the Nasdaq Opening Bell, Thursday, July 1, 2021 in New York. The Charlotte, North Carolina-based company, known for its glazed doughnuts, priced its initial public offering of 29.4 million shares at $17 a piece. That’s well below the $21 to $24 it was seeking. It raised $500 million and plans to use proceeds to pay down debt. (AP Photo/Mark Lennihan)

The 10 largest IPOs raised a combined $15.6 billion, equating 39% of the quarter’s total proceeds. Technology issuers produced six of the top 10 names as AppLovin (APP), UiPath (PATH), and Marqeta (MQ) rounded out the largest U.S.-based tech issuers for the quarter.

Ultimately, IPOs produced a 34% average return and a 21% median return from offer in Q2.

“Excluding two high-flying micro-caps, the average IPO gained 24% on the first day and returned 26% from offer,” the report read. “Returns were driven by strong first-day pops, as trading was about flat in the aftermarket. Two-thirds of IPOs finished above issue. All but one sector ended the quarter positive.”

As for the outlook on Q3, though Renaissance does not expect IPO issuance to reach the same levels in the second half of 2021 as it did in the first, it still believes this year will be one “for the books” as more companies prepare for IPOs and many SPACs search for merger targets.

“Sector activity continues to broaden, and the massive backlog of private unicorns are finally seizing the IPO route during a receptive environment,” the report read. “The Renaissance IPO Index’s recent rebound, combined with record filing activity, should keep issuance high. That said, when the IPO market runs hot, returns and activity can turn on a dime, a point that was made clear in the middle of the second quarter.”