Let’s talk a bit about artificial intelligence, AI. It’s serious tech, and not just science fiction anymore. AI underlies the machine learning processes that are powering information technology, allowing computer systems to adapt to change and increase the speed and accuracy of their information processing.

And the profits involved in AI, as it expands through the economy, will be immense. It’s estimated that AI as a whole will boost the global economy by more than $15 trillion by the year 2030, and a significant piece of that will emerge in the healthcare sector. By 2026, the midpoint of that forecast, AI is likely to be creating $150 billion in efficiency-related savings per year in the US healthcare sector.

Investors looking to cash in on AI’s application to the healthcare sector will be able to take their pick of segments. AI will impact healthcare in a huge range of modes, from connected machines and virtual nursing assistants to robot assisted surgery and computerized medication dosage tracking.

Using TipRanks’ database, we pinpointed two AI-related healthcare stocks that bring the technology to bear on the health industry from very different directions. Both have received bullish support from the analyst community, and offer considerable upside potential. Let's take a closer look.

We’ll start with Evaxion Biotech, a pharmaceutical research company that has built a proprietary AI-immunology platform for the development of new immunotherapies for both cancer and infectious diseases. Evaxion is a new stock, having gone public just this past February. The IPO raised $30 million through a sale of 3 million shares.

Evaxion has three development tracks in its pipeline; the PIONEER AI platform is involved in the creation of patient-specific cancer immunotherapies and has three drug candidates in various stages of preclinical testing and clinical trials, while the EDEN platform has one drug candidate under development, to support a vaccination program against infectious diseases. The company's third program uses the RAVEN platform to develop a vaccination against the COVID-19 disease.

Earlier this month, Evaxion announced the release of pre-clinical data from the Adaptive and Intelligent Vaccine for a Rapid Response against Corona Viruses program. The program uses the company’s RAVEN platform, which leverages AI in the design of vaccines, to work with the company’s Antigen Presenting Cell technology in the approach to a new vaccine for SARS-CoV-2. The proof-of-concept data released supports Evaxion’s approach to vaccine against this virus, which causes the COVID-19 disease.

Earlier, in May, Evaxion released its Q1 financial results, the first such report the company has made as a public entity. The report noted that the Phase 1/2a clinical trials on EVX-01 and EVX-02, the company’s lead drug candidates, remain on track, with recruitment ongoing and data readouts expected later this year. EVX-01 is under investigation as a treatment for metastatic melanoma and bladder cancer, while EVX-02 is being studied for its efficacy treating adjuvant melanoma.

Covering EVAX for Ladenburg Thalmann, 5-star analyst Wangzhi Li rates the stock a Buy along with a $23 price target. Investors could be pocketing gains of 205%, should Li's thesis play out as expected. (To watch Li’s track record, click here)

Judging from the consensus breakdown, it has been relatively quiet when it comes to other analyst activity. Over the last three months, only 2 analysts have reviewed EVAX. Both of which, however, were bullish, making the consensus a Moderate Buy. On top of this, the $18.33 average price target puts the upside potential at ~200%. (See EVAX stock analysis on TipRanks)

Now let’s look at the healthcare industry from a different angle. iCAD is an AI-tech company, developing a series of new devices that attack breast, prostate, and colorectal cancers from both ends – detection and radiation treatment. The company is already marketing the VeraLook platform, which uses advanced imaging tech to aid in detection of colon polyps – the pre-cancerous early stage – using integrated tools and improved image processing. The ProFound AI Risk tool bring a similar approach to the early detection of breast cancer. iCAD offers advances in both 2D and 3D mammography.

In April, the company reported its Q1 results, with $8.6 million in revenue, up 32% year-over-year. That gain was driven by an increase of 28% in detection revenue and an impressive 41% growth in the Therapy Rescue session. Revenue from ProFound grew 34% yoy.

Meanwhile, on June 14, iCAD reported that ProFound, which uses AI properties to improve digital breast tomosynthesis, has received CE Mark approval. The platform offers a solid combination of 10% improvement in its detection, and a 40% increase in speed on the new platform.

Among the bulls is Colliers Securities analyst Gene Mannheimer, who gives ICAD a Buy rating alongside a $22 price target. This figure implies ~27% upside for the year ahead. (To watch Mannheimer’s track record, click here)

“We are encouraged by [ProFound] version 3.0’s 10% higher specificity, which reduces the rate of false positives that improves performance relative to ICAD’s prior version and competitive products. The results support our view that ICAD’s AI technology can effectively be used as a ‘second read’ in breast cancer detection in cases where there are reader shortages," Mannheimer noted.

The analyst summed up, "Given our work that points to a meaningful resurgence of imaging volumes since the pandemic lows over a year ago that kept patients away from care settings, we continue to recommend ICAD for high-teens upside."

Overall, this stock has a Strong Buy consensus rating, based on a unanimous 5 positive reviews. The shares are priced at $17.17, and the $24.20 average price target suggests an upside of ~41% in the next 12 months. (See ICAD stock analysis at TipRanks) 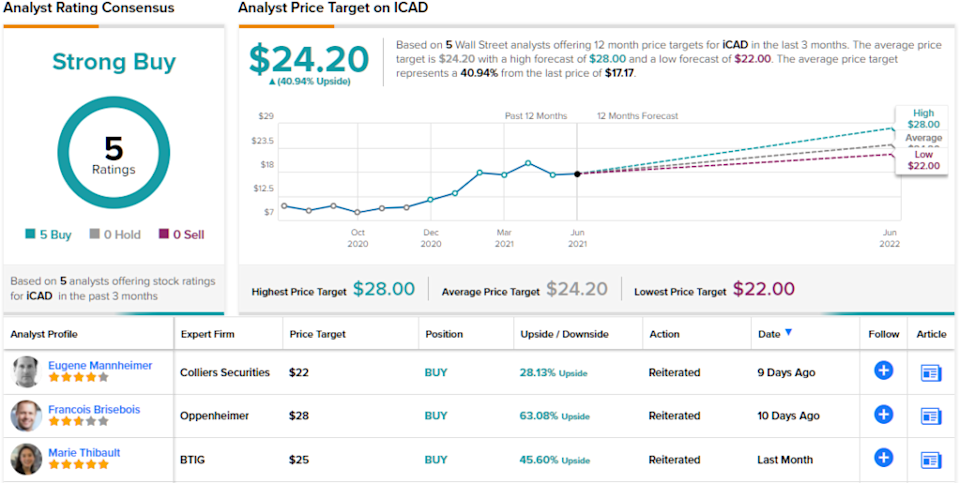