Intel Stock Opportunity Is Brewing for This Summer

I will start with the good news on Intel (NASDAQ:INTC) stock. It is cheap with a 13 price-to-earnings ratio and a price-to-sales of 3. That is three times cheaper than AMD (NASDAQ:AMD) and six times cheaper than Nvidia (NASDAQ:NVDA). However, those who bought it because it was cheap got what they paid, which is not a lot. 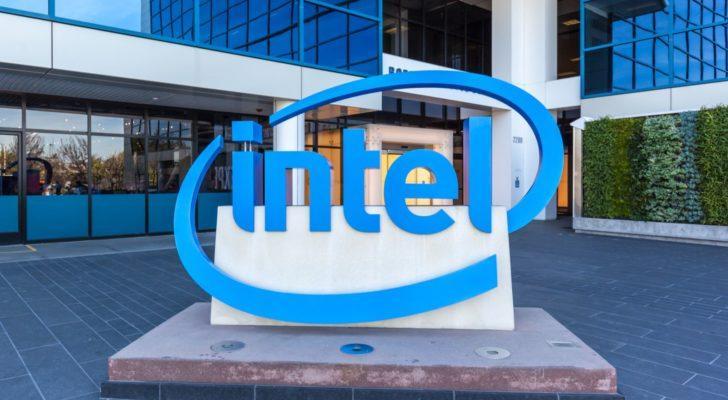 In the last two years its performance is 50% worse than the S&P 500. NVDA and AMD are up 15 and six times as much respectively for the same period. Choosing “cheap” has not worked out well.

But there is better news ahead because year-to-date the stats are much better. INTC stock is in the middle of the performance range. November served it as a great base for a monster 60% rally. Sadly, it ended in April and now they are trying to stabilize. More on this later.

Management is trying to turn this ship around. It is still a behemoth among those who provide brains for our computers. Therefore it is a mistake to count it out. Investors who believe in it for the long term have the right to own the shares. If the stock market is higher in the future this one will be a winner too. The pace of technology evolution is accelerating at an exponential rate. Demand will remain strong.

Intel used to lead the segment, but for the last few years, that honor went to Nvidia and AMD. I remember the days where “Intel Inside” was a big deal. I still have machines with that stamp, but I no longer look for it when shopping.

It’s not a surprise to see the INTC stock drag behind the other two. Luckily for Intel, the pandemic spurred interest in digitization and the trend went into ludicrous mode to borrow from a Tesla (NASDAQ:TSLA) technical term. There will be enough room for all of them to prosper for years.

INTC Stock and Demand for Chips

There is no turning back the clock on the need for tech and Intel has a great seat at that table. Management decisions have been sub-optimal but it looks like it could be changing going forward. They cannot afford to blink because the other two are extremely sharp. Nvidia has been setting the pace with innovation. AMD turned its ship around and now is also cheap.

The value argument is good but now AMD can almost claim equal footing. The only expensive one is NVDA and for good reason. Of the three, AMD is my favorite, but I am open to trading all of them long term.

This year my write-ups include a hybrid approach of trading around long-term investments. INTC stock spent the last three years fluctuating inside a very wide range between $42 and $68 per share. It currently sits in the middle of it, so there’s no current new course of action. A dip toward $50 per share would be a solid buying opportunity. A rally into $66 per share would make for an opportunity to scalping profits. At the very least it wouldn’t be a place to start a new positions. If the bulls are able to take out $68 per share then the chase is on much higher. 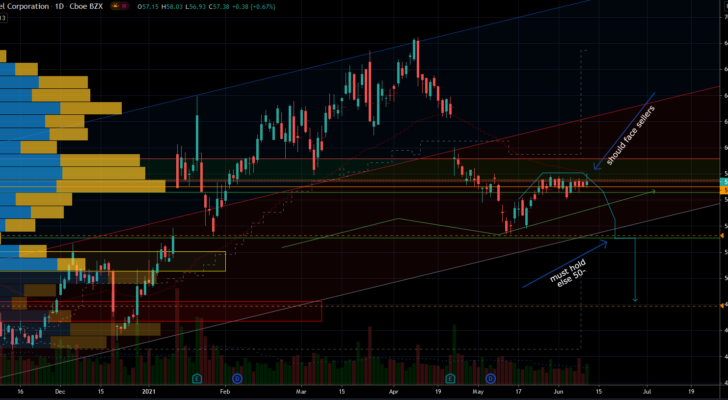 The indices are at all time highs and that represents a risk. If, for whatever reason, Wall Street panics and markets correct, INTC could face a big problem below $44 per share. That scenario would bring about ominous results for the short term.

On the daily chart, there is a potential bearish scenario brewing if INTC stays below $58 per share. It becomes necessary to hold above the May lows otherwise it could fall 9% from there. On the other side, there is resistance around $59 per share.

Traditional thinking shames investors for trading actively around their long-term thesis. I, on the other hand, applaud it because we have to evolve with the times. There’s no reason to ride a stock lower when it is avoidable. As there is also good reason to buy the dips and fade resistance areas. When markets panic and hammer a quality stock, I step up to the plate. Those are rarely losing trades with room to spare.

Luckily, when dealing with INTC stock, we don’t have to worry much about meme investors. They’ve contained themselves inside the small-caps arena so far. It’s nice to see that we can still trade and invest quality stocks like this on solid fundamentals. Management has done a good job maintaining a proper profit and loss statement. Revenue growth is a bit modest but at least it’s there. They just need to avoid making large strategic mistakes because they could be deadly. With competition as smart as Nvidia and AMD, Intel cannot afford to blink.

This is a stock I would definitely buy on the dip. The opportunity to pounce may come going into or out of this summer. I wrote about the upside opportunity last August when it was still under $50 per share. I would copy-paste that thesis with confidence the next time the stock falls under $50.

The post Intel Stock Opportunity Is Brewing for This Summer appeared first on InvestorPlace.