Inflation is eating into these 3 food makers’ profits

The latest sizzling Consumer Price Index (CPI) may not tell the whole story on the inflationary outlook as a rebounding U.S. economy rounds the corner into the second half of the year, but big food makers like PepsiCo do.

Headline consumer prices rose 0.9% in June compared to May, accelerating from May's 0.6% monthly increase. CPI increased 5.4% from a year ago — marking the biggest rise since 2008. Gains were seen in everything from used cars to women's dresses to food. The core consumer price index for June, which excludes food and energy prices, rose 4.5% over last year. This marked the fastest rise since 1991.

"Price increases stemming from the reopening of the economy and ongoing supply chain bottlenecks will keep the rate of inflation elevated and sticky as supply/demand imbalances are only gradually resolved," said Greg Daco, Oxford Economics' chief U.S. economist.

But for a truer picture on what may be ahead on the inflationary front, investors would be wise to check out the latest from the country's biggest food makers, as opposed to just relying on the CPI.

Most food producers are dealing with significant inflation in labor and transportation, and are eyeing new rounds of price increases into year-end in a bid to protect profits. Generally, these price increases are far in advance of the headline readings for the CPI and many of its components.

Here are three of the latest examples.

After an impressive second quarter on the back of resurgent demand for beverages and snacks outside of one's home, PepsiCo (PEP) is looking at more price increases to help offset high levels of inflation borne from the pandemic recovery.

"The way we think about pricing is really a reflection of the investments we make in our brands and the innovation that we have because those are the things consumers are willing to pay more for. We think of it as connected to delivering value to consumers. Obviously with cost pressures it puts that much more pressure on pricing," PepsiCo Vice Chairman and CFO Hugh Johnston told Yahoo Finance Live on Tuesday.

PepsiCo clobbered analyst forecasts for the second quarter and raised its full-year profit outlook, so it does appear consumers have accepted the company's price increases. How they will respond to more price increases later this year is anyone's guess.

The king of frozen food is teeing up more price increases of its own after inflation hammered profits in the most recent quarter. Adjusted operating profit margins for the quarter fell 311 basis points from a year ago in large part because of inflationary pressures, Conagra Brands (CAG) said Tuesday. Operating profits fell in all business segments vs. a year ago, save for food service.

"As the fourth quarter unfolded, input cost inflation accelerated and we now expect fiscal 2022 input cost inflation to be materially higher than we anticipated at the end of fiscal Q3. In response, we have further enhanced the aggressive and comprehensive action plan already being executed, which includes broad-based pricing. While we are pleased with the initial results, there will be a lag between the time we are hit with higher costs and when we realize the benefits of our actions," said Conagra Brands CEO Sean Connolly. 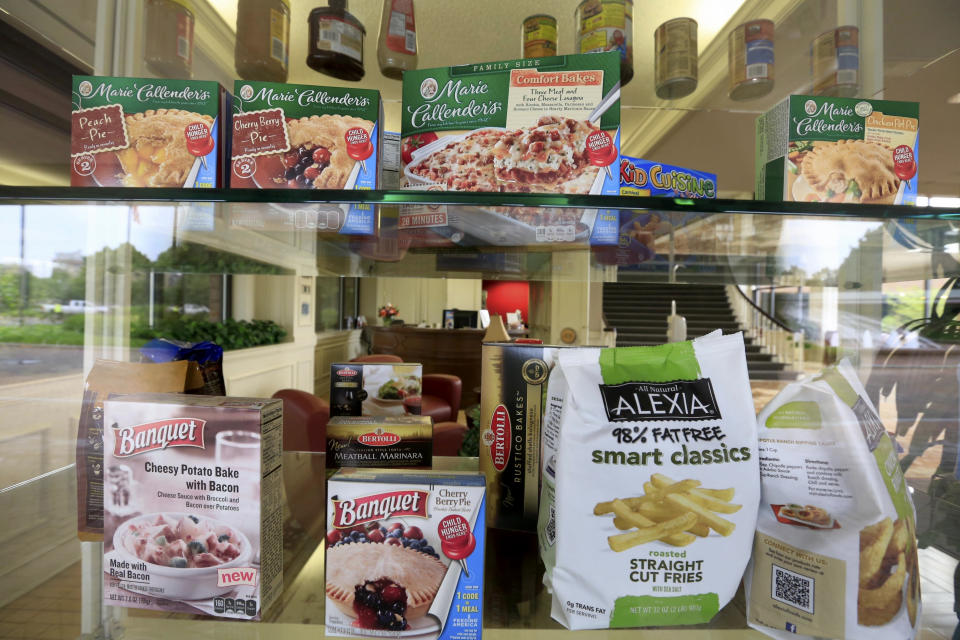 A selection of products made by ConAgra Foods is on display at ConAgra world headquarters in Omaha, Neb., Tuesday, June 30, 2015. ConAgra Foods Inc. plans to sell its faltering business that makes store-brand packaged food just two years after spending $5 billion to beef it up by buying the private-label food maker Ralcorp. (AP Photo/Nati Harnik)

Despite the price increases, Conagra was still forced to slash its full-year profit outlook.

For its current fiscal year, Conagra now sees adjusted earnings per share of $2.50. Previously, it forecast full-year earnings of $2.63 to $2.73.

The cereal and snack maker has been hesitant to say how much it has raised prices, and by how much it will move forward. But it's being hit by inflation like its food peers, and is prepared to act further.

"So we're very well aligned with our customers, not only on the demand environment, but also the cost environment," General Mills (GIS) CEO Jeff Harmening told investors on an earnings call in late June. "They see the same cost pressures we do. And we've instituted pricing in the vast majority of our categories and markets throughout the world. And while no one wants to increase prices, we've had to do that because the cost environment is what it is. And we have found them to be understanding because they're in the same kind of boat that we are."