Inflation data, consumer confidence: What to know this week

Investors this week are poised to receive a number of key economic data reports offering the latest look at the state of inflation in the U.S., with investors and consumers alike jittery at the prospects of rising prices during the post-pandemic recovery.

The U.S. Bureau of Economic Analysis will release its April personal consumption expenditures (PCE) index on Friday. The print is expected to show a rise of 3.5% in April over last year for the biggest increase since 2008, according to Bloomberg consensus data. This would also accelerate after a year-on-year jump of 2.3% in March. On a month-over-month basis, the PCE likely increased by 0.6%, accelerating after a 0.5% increase during the prior month.

Stripping away volatile food and energy prices, the so-called core PCE is expected to have increased by 2.9% in April over last year, which would be the largest jump in more than two decades.

Though the core PCE serves as the Federal Reserve's preferred inflation gauge, the expected surge in this week's inflation reports are unlikely to provoke immediate concern for the central bank. Federal Reserve Chair Jerome Powell has said repeatedly he believes inflationary pressures this year will be "transitory," largely reflecting base effects as this year's data lap last year's pandemic-depressed levels. And for years previously, inflation ran well below the central bank's targeted levels.

In the words of the central bank's latest monetary policy statement, Federal Open Market Committee members wrote, "With inflation running persistently below this longer-run goal, the Committee will aim to achieve inflation moderately above 2% for some time so that inflation averages 2% over time and longer‑term inflation expectations remain well anchored at 2%." In other words, the Fed has suggested monetary policy would remain as is — with interest rates near zero and the Fed's asset purchases taking place at a rate of $120 billion per month — as the economic recovery out of the pandemic progresses.

Still, the market has suggested it might need more convincing before agreeing that the jump in inflation will not be long-lasting or prompt a change in the Fed's current ultra-accommodative monetary policy positioning. Longer-duration assets like growth and technology stocks have especially come under pressure in recent months amid inflationary concerns, given prospects that higher rates might undercut future earnings potential. The information technology sector has sharply underperformed the broader S&P 500 so far this year, reversing course after outperforming strongly in 2020. 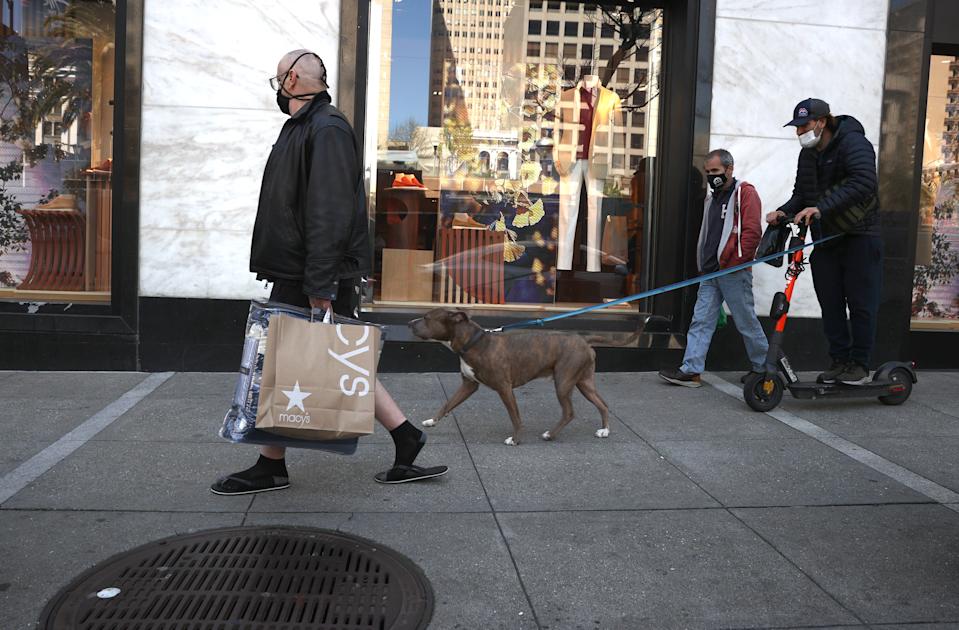 SAN FRANCISCO, CALIFORNIA – APRIL 15: A pedestrian carries a shopping bag as he walks through the Union Square shopping district on April 15, 2021 in San Francisco, California. According to a report by the U.S. Commerce Department, retail sales surged 9.8 percent in March as Americans started to spend $1,400 government stimulus checks. (Photo by Justin Sullivan/Getty Images)

"Markets have basically made inflation the battleground issue for determining whether or not it's really this rotation trade that'll win out the rest of this year, or whether it's the tech and growth stocks that won out last year," James Liu, Clearnomics founder and CEO, told Yahoo Finance last week. "You've seen this bounce back and forth throughout the course of this year."

Heading into this week's PCE report, a number of other inflation prints have also exceeded expectations, pointing to an increase in both consumer and producer prices. Government data showed that headline consumer prices surged by a faster than expected 4.2% last month. Excluding food and energy, prices jumped 0.9% in April and were up 3.0% over the year. And producer prices also came in higher than expected, with core producer prices rising 4.1% in April over last year versus the 3.8% increase expected. These stronger-than-expected increases could portend some upside risk to this week's PCE print, some economists suggested.

"The April CPI data were stronger than our expectation, suggesting a more front-loaded impact from transitory factors, pressure from semiconductor shortages and the resurgence of demand for sectors affected by the pandemic," Nomura Chief Economist Lewis Alexander wrote in a note Friday. "Given that the core PCE price index is a chain-weighted index, an expected rise in spending for COVID-sensitive services could amplify the magnitude of corresponding prices."

Updated readings on sentiment among consumers are also due for release this week.

"Consumers have taken notice of rising inflation, as evidenced by Google Trends and the University of Michigan survey," Bank of America economist Michelle Meyer wrote in a note, referring to the University of Michigan's Surveys of Consumers. "The expectation is increasingly for higher inflation, even if dominated by transitory stories, and we believe there is risk for further upside in the near term. But, over the medium term, we expect expectations to cool alongside the core inflation trajectory, albeit to a higher trend."

In the University of Michigan's preliminary May consumer sentiment survey, the headline index tumbled to 82.8 from 88.3 in April, "due to higher inflation—the highest expected year-ahead inflation rate as well as the highest long term inflation rate in the past decade," Richard Curtin, chief economist for the University of Michigan's Surveys of Consumers, wrote in a note at the time. However, he added that "consumer spending will still advance despite higher prices due to pent-up demand and record saving balances."

The University of Michigan's final May sentiment print due for release on Friday is expected to firm slightly to 83.0.

Other sentiment surveys will likely show similar dips for May, due in part to rising price pressures. The Conference Board's closely watched Consumer Confidence Index will be released on Tuesday, and is expected to dip to 118.9 in May from 121.7 in April. That had, in turn, been the highest reading since February 2020, or before COVID-19 cases began to surge in the U.S. last year.