Consumers are getting a little nervous about inflation

On Friday, we learned the personal consumption expenditure (PCE) price index was up 3.6% year-over-year in April. The core PCE price index, which excludes food and energy, was up 3.1%, the biggest jump in this index since 1992.

Similar to how they reacted to the hot April consumer price index (CPI) report, economists were quick to note this increase was largely due to temporary anomalies tied to the pandemic. "We continue to move through the near-term surge in inflation as COVID-19 distortions unwind and services spending and inflation, in particular, continue to play catch-up from depressed levels," Morgan Stanley's Ellen Zentner said.

However, assertions that the current bout of price volatility is a transitory phenomenon haven't placated consumer concerns that prices may be materially higher down the road.

The Conference Board's Consumer Confidence Index published last week declined modestly to 117.2 in May from 117.5 in April as consumers were "less upbeat this month about their income prospects—a reflection, perhaps, of both rising inflation expectations and a waning of further government support until expanded Child Tax Credit payments begin reaching parents in July."

Similarly, the University of Michigan's Consumer Sentiment Index out last Friday fell to 82.9 from April's reading of 88.3. Michigan survey director Richard Curtin said, "It is hardly surprising that the resurgent strength of the economy produced more immediate gains in demand than supply, causing consumers to expect a surge in inflation. Record proportions of consumers reported higher prices across a wide range of discretionary purchases, including homes, vehicles, and household durables — the average change in May vastly exceeds all prior monthly changes." 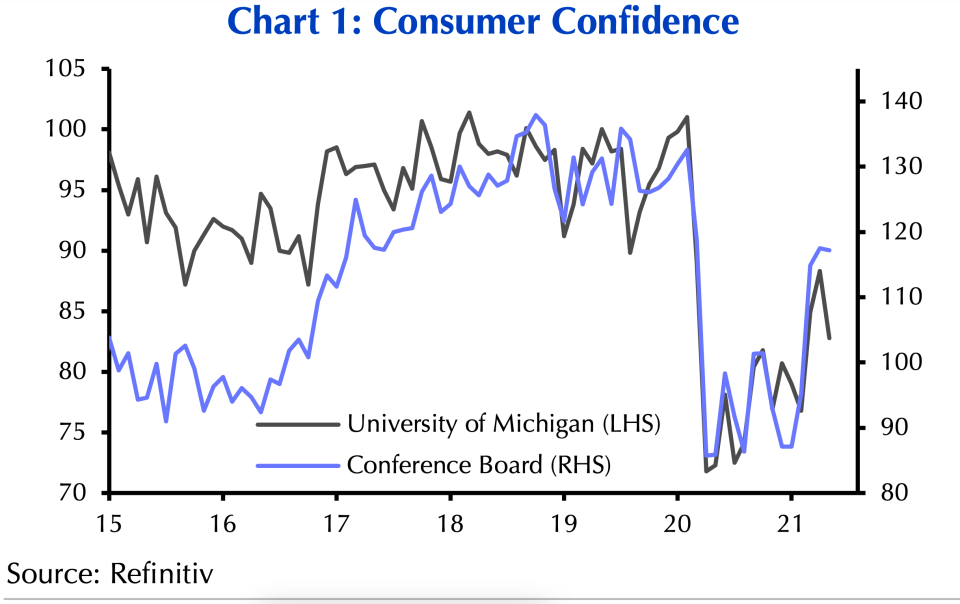 None of this is particularly surprising as it's been well-telegraphed that everyone is talking about inflation.

"Admittedly, the declines in confidence were modest – only partially reversing the improvement since the start of this year," Capital Economics' Paul Ashworth said. "But it is still disconcerting that – despite the successful vaccine program, the massive fiscal stimulus, high household saving and the record number of job vacancies — confidence remains significantly below its pre-pandemic level."

And concerns about inflation may not wane anytime soon. Tens of millions of American consumers hit the road for Memorial Day weekend where they were confronted by the highest gas prices in six years. Prices for hot dogs, alcoholic beverages, and rental cars are above pre-pandemic levels. While airfares and hotel rates remain below pre-pandemic levels, they have been surging as of late.

It remains to be seen to what degree any downturn in confidence might translate into a pull back in spending. After all, what people say doesn't always match what people do.

"Consumers’ inflation expectations only matter if consumer behavior is changed by their views (it rarely is)," UBS economist Paul Donovan said on Friday.

The implication here is that consumers will continue to spend as long as they have the capacity to spend. Which could actually prove bullish, especially if the recent price surges do indeed prove to be transitory.

By Sam Ro, managing editor. Follow him at @SamRo

ALSO: Zoom earnings, May jobs report: What to know this week

KKR and CD&R close to $4.7 billion deal to buy out Cloudera [Bloomberg]

When is an economy overheating: Yahoo U