How Snowflake stock may be entering ‘the most rewarding stage’

U.S. initial public offerings (IPOs) are on a tear this year — raking in $171 billion and already topping the 2020 total. According to one proprietary trader who specializes in IPOs, several recent new listings are showing signs of life and starting to attract institutional interest — particularly Snowflake (SNOW).

Kathy Donnelly, proprietary equities trader and co-author of the book “The Lifecycle Trade,” broke down the price action in Snowflake using the framework she and her colleagues developed to classify the journey newly traded stocks make. She said Snowflake, which debuted in September 2020, may finally be completing the second of three major phases — after which a prolonged rally could occur.

IPO Lifecycle Phases as described in the book,

The IPO Advance Phase is the first run-up in price when the stock initially lists on an exchange. There's no guarantee price will rally, and a sell-off can result in what Donnelly calls an IPO Advance Failure. When stock price rallies out the gate, it tends to be short-lived.

"IPOs can have a really exciting initial advance when they first start trading publicly. But usually, it's about six months to a year — sometimes two, three years — where it goes sideways. Often, it undercuts that initial gain that it made and that initial base that it created, which Snowflake did," said Donnelly.

Since those early gains in November and December, the stock reversed, making a series of new all-time lows. According to Donnelly's research, 92% of all IPOs undercut the first trading day's low, which Snowflake did on day two. So it can pay to wait until Wall Street decides what it wants to do with the stock. 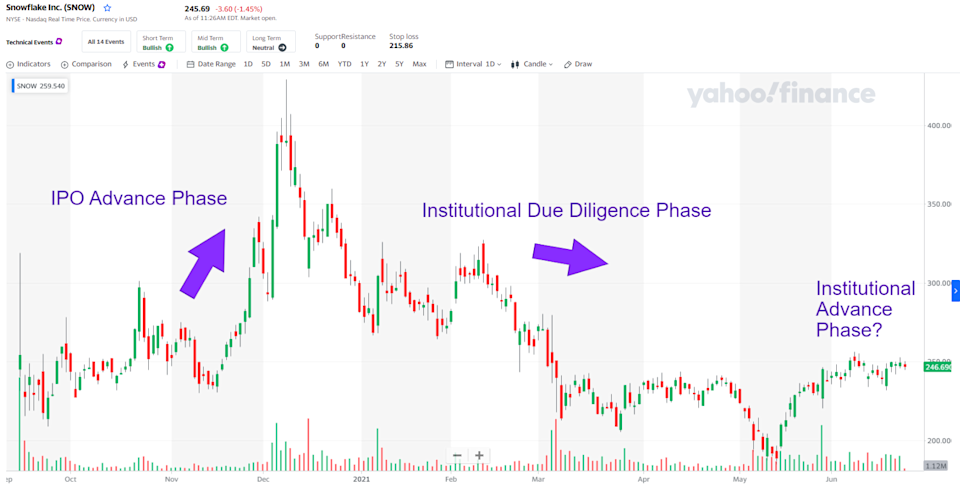 Snowflake (SNOW) chart since IPO day, annotated with the three phases identified in “The Lifecycle Trade.”

As the stock trades for a few more months and becomes more seasoned, large institutions will study the company, performing due diligence. This Institutional Due Diligence Phase can last years in some cases with price action going sideways to down as institutions decide if they want to own or recommend the stock.

Donnelly explains that Snowflake may be entering this potentially profitable advance phase, which is why it's on her radar. However, it's too early to tell when or if this will occur.

She also points out that the stock has been trading for just over 40 weeks, which corresponds to about 200 days. The 200-day moving average is one of the most commonly watched indicators because it helps identify the long-term trend of a stock. Donnelly notes that Snowflake is currently trading about 5% below its 200-day moving average. If its price is able to break above this potential resistance level, that gives investors more confidence in the bullish case.

"Now we're in that [Institutional Due Diligence Phase], where it could be transforming and switch from the due diligence phase of six months to a year or more into an advance that may last one or two years or more. That's what I find is the most rewarding stage of the stock," said Donnelly.

Jared Blikre is an anchor and reporter focused on the markets on Yahoo Finance Live. Follow him @SPYJared