Here’s why bitcoin is so volatile: trader

As bitcoin (BTC-USD) holds above $40,000, investors are laser-focused on the price gyrations, attempting to divine the next big move. One former trader at the New York Stock Exchange is demonstrating how technical analysis is ideally suited to analyzing and predicting cryptocurrency price movements.

At a recent Yahoo Finance Plus webinar, Capital2Markets president Keith Bliss, explained to attendees that bitcoin and other cryptocurrencies don't lend themselves to traditional fundamental analysis because they don't have balance sheets and financials that can be modeled. However, they exhibit the same chart patterns as their stock cousins — meaning investors can use technical analysis to help predict price movements.

"[W]ith a Procter & Gamble (PG) or an Exxon Mobil (XOM) … you can see what the discounted cash flow over future 12 months will be and then determine what a fair price is for that equity. Bitcoin doesn't have that. It's investor sentiment and catalysts outside of any kind of fundamental reckoning within the asset. So that's why it's kind of fun to chart," he said.

Bliss employs a variety of technical tools but begins with the simplicity of trend lines, which connect price extremes over time. Markets can go up, down or sideways, and trend lines help determine not only the direction but the inflection points as well. 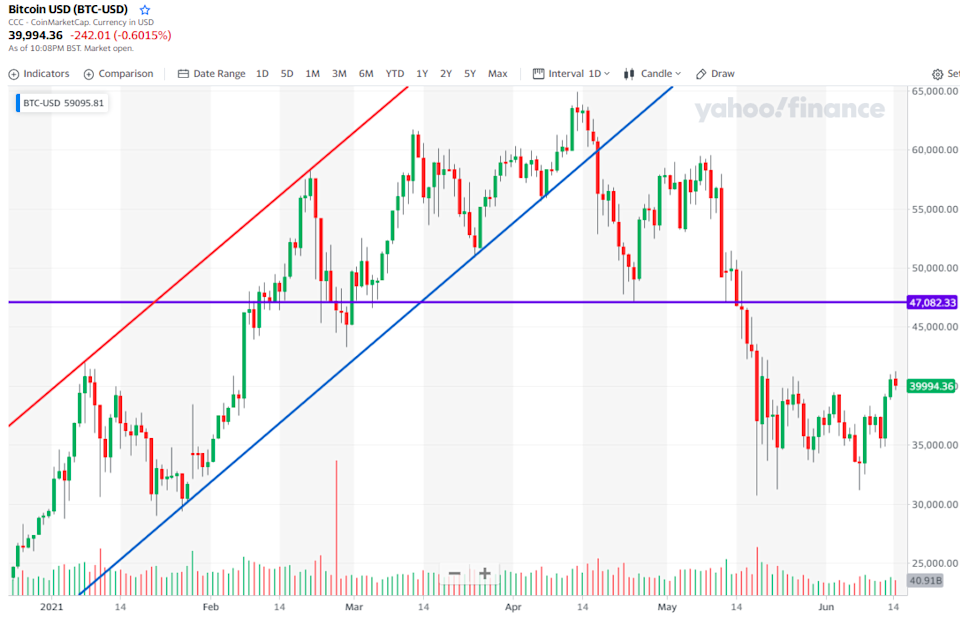 In the above chart, the red trend line is parallel to the blue line and captures the January and February highs. Once these two points of contact were known, the parallel blue line was fixed to the January low. After peaking in February, the market came down and nearly touched the blue line, which was a favorable entry point — as were the March and April lows. Investors can exploit these trends for entries and exits.

But trends eventually break, as was the case with bitcoin in April when it finally broke down through the blue line. This was a warning that market participants were pulling back on their bullishness and not as interested in bidding up prices like the prior months.

"[Y]ou can see that it broke support pretty violently [in April] when it started to pull back based upon investor sentiment. Sometimes when this happens with other asset classes as well — when you have a consolidation at a certain price — and then the market's trying to decide what's going on and you're waiting for that one catalyst — either to make it break out or to pull it back below the support line," said Bliss.

After the initial price drop to about $47,000 (purple line), bitcoin rallied to nearly $60,000 before petering out and dropping back down to potential support at $47,000. When price arrives at a level of interest where it historically inflected, it tends to react. Bitcoin managed a small bounce from that level but succumbed to selling once it was breached. After that, it was a quick trip to nearly $30,000.

Bliss breaks down the narratives and investor psychology behind bitcoin as it was peaking, manifested by the price action in the chart. "First off, Tesla decided that they were no longer going to accept it as payment for their cars … People started beating Elon Musk up pretty radically, both on bitcoin as well as dogecoin," he said.

More recently, the news that the FBI recovered most of the bitcoin paid by Colonial Pipeline to ransomware hackers cast doubt on the security of bitcoin, and led to another price drop, said Bliss.

"[P]eople were worried about the security of bitcoin. You know, there's still questions about how did the FBI locate that?" said Bliss, adding, "The Espionage business probably could answer that better than I can."

Jared Blikre is an anchor and reporter focused on the markets on Yahoo Finance Live. Follow him @SPYJared