Red Robin CEO Paul Murphy is banking on the labor shortage plaguing his chain — along with most in the fast food industry — ending well before year end.

"We see it [labor shortage] being under control and stabilized by early summer," Murphy said on Yahoo Finance Live.

Red Robin Gourmet Burgers (RRGB) has had to reduce hours at some locations because of the inability to find new workers in an economy roaring back from the COVID-19 pandemic. In turn, that has weighed on sales for Red Robin as it has had to compete with higher wage jobs being offered right now in sectors such as retail and warehousing.

Murphy explains Red Robin has tweaked its hiring process in an effort to get new workers into the business as quick as possible and retain them.

"Through our technology, we have shortened our time for the hiring process and onboarding process. We have modulized our training because a lot of applicants coming in have not been in the industry before, so we enabled our training to be shortened. In a sense they learn one station at a time. And we have also put in a wage progression program that when somebody is hired, we are very transparent as to their wage increases and at 90 days, and at six-months and 12 months and 18 months. We are finding all of those things combined are working well for Red Robin," Murphy said. 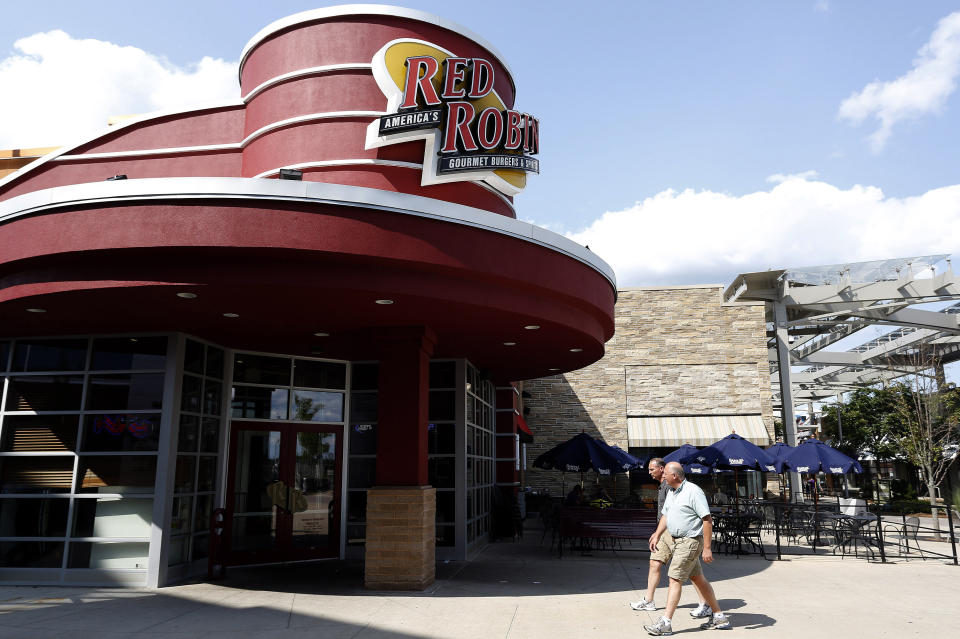 Even with the labor shortage, Red Robin is managing to partake in the economic recovery well underway.

Red Robin's first quarter same-store sales rose 10% from a year ago. Adjusted operating profits clocked in at $27.4 million compared to a $10.7 million loss a year ago.

Ultimately finding workers and driving stronger execution, however, will be essential in Red Robin winning more Wall Street analysts over. Four out of the five sell-side analysts that cover Red Robin rate the stock a Hold or Sell, according to Bloomberg data.

"With the stock up almost 76% YTD (vs. the S&P 500 +11.5%), we see shares potentially taking a step back as 1Q results bested stale Street expectations and continued to lag the industry, including a choppier recovery in May. Red Robin has plenty of initiatives aimed at driving both the top & bottom lines (continued Donatos [pizza] roll-out, new labor models, higher-level off-premise sales) with some progress to-date (e.g., off-premise mix of ~42% in 1Q, which was up quarter over quarter and +~76% year over year). However, we do see reasons to remain cautious, including rising labor costs, which could throw a monkey-wrench in the long-term margin recovery and given the relatively low starting point (e.g., pre-pandemic EBIT margin of <1%), the company does not have much room for error," said Wells Fargo restaurant analyst Jon Tower in a research note to clients.