Google CEO: ‘Work is no longer just a place’

Google and Alphabet CEO Sundar Pichai saw a “tectonic shift” in the future of work, driving product innovation and new ways of working at the tech giant.

The pandemic, which resulted in a massive remote work experiment, "was a tectonic shift. And the future of work is changing dramatically. It is going to be more flexible. Work is no longer just a place," Pichai told Yahoo Finance in a wide-ranging interview.

More than 20 years ago, Google (GOOG, GOOGL) set out the create “the happiest, most productive workplace in the world.” The company pioneered the fun office, from the vibrant colors and decor to the perks and amenities. Now Google is reimaging the future of work across its offices and campuses.

“Just like we were excited 20 years ago to rethink what coming to work meant, I feel the same optimism about being able to rethink work in this modern context. So, for example, we knew what — we value people coming in, being able to see each other in person, the sense of community and collaboration it creates. But people had a difficult time with commutes,” the 48-year-old CEO said.

To illustrate his point, Pichai said the new model would allow a parent to make that 11:00 a.m. parent-teacher conference on a Tuesday or a doctor’s appointment in the middle of the day.

“So bringing that flexibility, I think, helps people adapt to the realities of modern life,” he added.

In a recent memo to Google employees, Pichai described a hybrid workplace that allows collaboration “across many work environments,” pointing to Google’s Real Estate and Workplace Services team testing “multi-purpose offices and private workspaces, and working with teams to develop advanced video technology that creates greater equity between employees in the office and those joining virtually.”

Pichai’s memo envisioned a workweek with most employees spending three days in the office — mainly when it involves collaboration — and two days “wherever they work best.” With Google’s expansive global reach, employees can apply to move to another office or apply for remote work. According to Pichai, 60% of Google employees will return to the office a few days a week, while 20% will work in a new office location and another 20% will remain working from home. 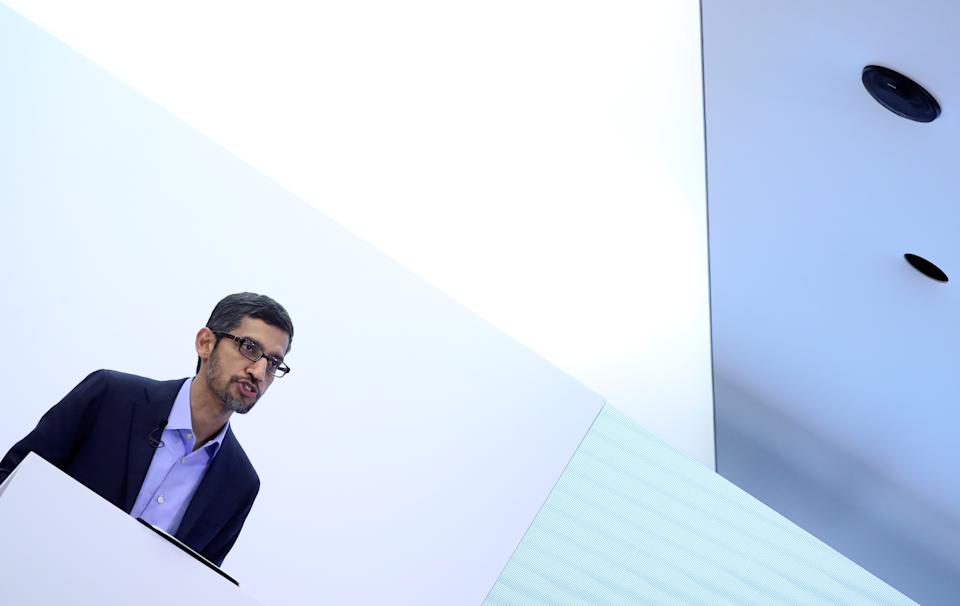 Part of Google’s approach to more flexible is its “work-from-anywhere weeks,” allowing employees to work at any location other than their main office for up to four weeks per year.

“So, being able to take that longer trip in summer, which may be the last time most people did was when they were in college, to recreate that experience and to go away with your family for four weeks, we can realize all that. So I still think we are committed to making work fun, but at the same time, have a sense of community around it,” Pichai said.

What’s more, Google now has more tools, such as its productivity applications, to make all of this possible not only for itself but for other enterprises.

This week, Google hosted its Google I/O developer conference in Mountain View, California, after a year-long hiatus because of the global coronavirus pandemic. At the event, Google debuted several new products, including its Smart Canvas experience in Google Workspace connecting Google Docs, Sheets, and Slides with more collaborative tools such as @ mentions, checklists, assisted writing, and present to meet.

“Google Docs really pioneered collaboration, the fact that multiple people can be working on the document at the same time. But now, you can be working on a document and just click up on a video call if you want to talk to everyone, or easily assign people tasks. And so we are bringing that richness on top of the collaboration. So I think it is to support that future of work,” Pichai said.

Google also debuted its Starline Project, a technology that uses hardware and software to create three-dimensional video conferencing where participants appear life-size, mimicking the feeling of being in-person.

“We are doing that because internally, we are trying to solve problems. And so, how do we collaborate in this new world? And so any innovations we have as part of that, we have committed to bringing it outside and sharing it with the world as well,” Pichai added.

To be sure, the Starline technology is expensive, but “you work hard to bring it down so that more people can use it. So it’s investing in making sure that happens,” according to Pichai.

Pichai later told Yahoo Finance that flexibility in the future of work might also help drive the company’s diversity efforts.

“[The] flexibility that’s built into the future of work, I think, gives us a chance to do all of this better. So, for example, supporting women through the moment when they have children — it’s often a pivotal moment in which many women drop out of the workforce — I think a more flexible workspace can allow you to support that better.”

The future of work also provides more flexibility for location, allowing Google to recruit from “anywhere in the world, including areas where you have more access to underrepresented talent.”

“For example, we are committing to hire 10,000 employees in places like Atlanta, Chicago, D.C., New York, where there’s a lot more diverse talent … So I see all of that as an opportunity, and I think we can learn in and do better.”