Gold prices continued to rebound for a 3rd consecutive day, rising approximately 0.5% for the week. The dollar finally slipped paving the way for higher gold prices. U.S. 2-year yields tumbled on Friday in the wake of the payroll report, as wage gains remained steady and the workweek slipped. The Commerce Department reported that factory orders surged 1.7% in May after declining 0.1% in April. Expectations had forecast factory orders rebounding 1.6%.

Gold prices moved higher but remain rangebound. Support is seen near the 10-day moving average near 1,776 and then an upward sloping trend line near $1,762. Resistance is seen near the 50-day moving average at 1,883. Short-term momentum has turned positive as the fast stochastic generated a crossover buy signal. Negative medium-term momentum is decelerating as the MACD (moving average convergence divergence) histogram is printing in negative territory with a rising trajectory which points to consolidation. 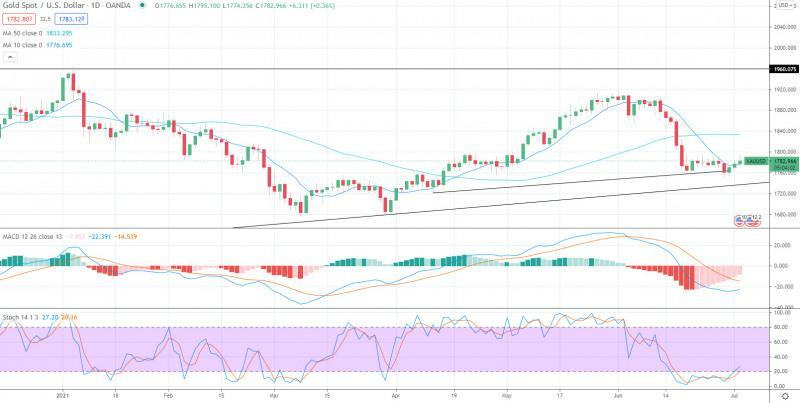 U.S. Payrolls Weigh on the Greenback

Nonfarm payrolls increased 850,000 for the month, compared with expectations of 706,000. The May figure was revised to 583,000. The unemployment rate, rose to 5.9% against the 5.6% expectation. The jobless rate increase came even though the labor force participation rate was unchanged at 61.6%. Average hourly earnings increased 0.33% for the month and 3.6% year over year, both matching estimates. The average workweek declined by 0.1 hours to 34.7 hours. The decline in the workweek and the unchanged