Gold futures closed higher in Monday’s limited holiday trade after reaching a two-week high as concerns eased over an earlier-than-expected rate hike by the Federal Reserve after the release of a mixed bag of U.S. jobs data on Friday. Meanwhile, the focus shifted to minutes from the U.S. central bank’s June policy meeting, due to be released on Wednesday.

Data on Friday showed U.S. companies in June hired the most workers in 10 months, but unemployment ticked higher, workforce participation didn’t budge and the pace of hourly earnings growth slowed.

The price action suggests the market may be ripe for a short-covering rally equal to about 50% to 61.8% of the recent break. 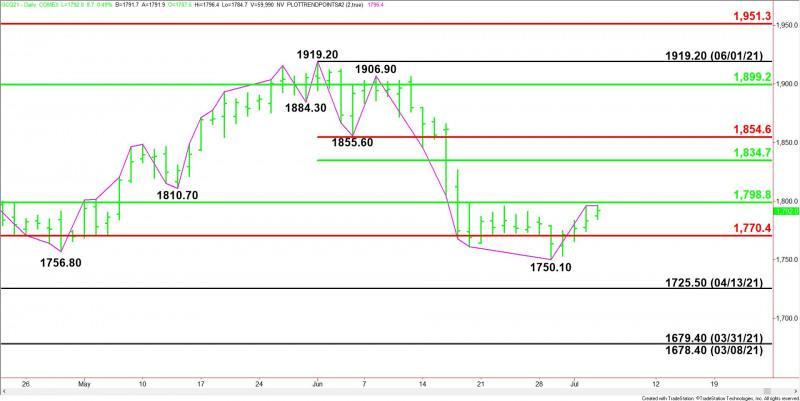 The early direction of the August Gold market on Tuesday is likely to be determined by trader reaction to the 50% level at $1798.80.

A sustained move over $1798.80 will signal the presence of buyers. If this move is able to generate enough upside momentum then look for a possible acceleration into the short-term retracement zone at $1834.70 to $1854.60.