Gold futures are trading lower late Monday after traders were chopped up throughout the session due to heightened volatility in the stock market. A plunge in Treasury yields helped provide support, but a surge in the U.S. Dollar weighed on prices.

Sentiment in riskier markets was bruised by investors’ fears over a relentless surge in coronavirus cases, which forced many Asian countries into imposing lockdowns, and growing inflationary pressures. 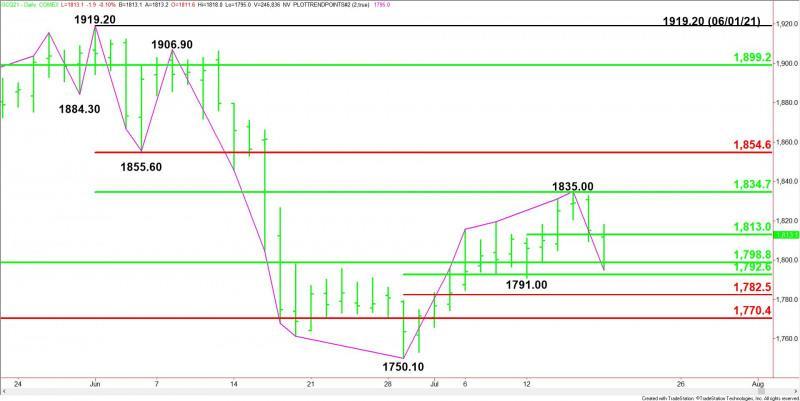 The main trend is down according to the daily swing chart. A trade through $1835.00 will change the main trend to up. A move through $1750.10 will signal a resumption of the downtrend.

The direction of the August Comex gold market on the opening on Tuesday is likely to be determined by trader reaction to the minor pivot at $1813.00.

A sustained move over $1813.00 will indicate the presence of buyers. If this move is able to generate early upside momentum then look for a move into the resistance cluster at $1834.70 to $1835.00.

Monday’s price action indicates that despite the downtrend, aggressive counter-trend buyers are willing to come in on weakness.