Sentiment can change fast on Wall Street. From an investor favorite, a stock can quickly lose momentum when the narrative turns sour.

Over the past year, Plug Power (PLUG) stock has experienced both the highs and lows. After a cooling off period, the tide is turning again in the hydrogen fuel cell maker’s favor.

“PLUG is a leader in the fuel cell material handling market,” the analyst said. “PLUG’s GenDrive has near-95% market share in fuel cell forklifts with 5 ‘pedestal’ customers including Amazon, Walmart, Home Depot, and GM. Fuel cell penetration within this market is still in its infancy and can increase as fuel cell forklifts can be competitive with traditional offerings and as customers look for decarbonization efforts.”

PLUG appears at the right place, at the right time. De-carbonization is on governments’ agendas across the globe, and hydrogen is set to play a key role. With government initiatives getting behind the transformation, Spak believes a “multi-decade hydrogen transition can occur.”

Accordingly, there is potentially a huge market to address. By 2050, for industries closely correlated to hydrogen technology, the Hydrogen Council anticipates the hydrogen economy will be raking in more than $2.5 trillion in yearly sales. With associated products such as fuel cell electric vehicles (FCEVs) along for the ride, the total revenue could reach $4 trillion.

PLUG has also set its sights on expansion. By leveraging its “material handling fuel cell know-how” it is stepping into other end-markets such as stationary power and transportation.

The company has also made a series of acquisitions – United Hydrogen and Giner ELX were both acquired in 2020 – which have positioned it as a “one-stop hydrogen shop” with a focus on “accelerating expansion in green hydrogen generation.”

There are also collaborations with international companies such as South Korea’s SK Group and Renault in Europe. These are regions where hydrogen “may inflect faster” than in the US – which, to-date, has been the main focal point.

While some have argued PLUG’s valuation is an issue, the analyst says the “rich valuation” is justified due to the company’s projected growth. Spak expects revenue will increase from $447 million in 2021E to $12.6 billion in 2030E – a 45% CAGR (compound annual growth rate).

As such, Spak initiated coverage of PLUG with an Outperform (i.e., Buy) rating and $42 price target, indicating share appreciation of 23% in the year ahead. (To watch Spak’s track record, click here)

Looking at the consensus breakdown, with 9 Buys, 4 Holds and 1 Sell, the stock has a Moderate Buy consensus rating. The average price target is slightly higher than Spak’s; at $44.21, the forecast is for one-year gains of 29%. (See Plug Power stock analysis on TipRanks) 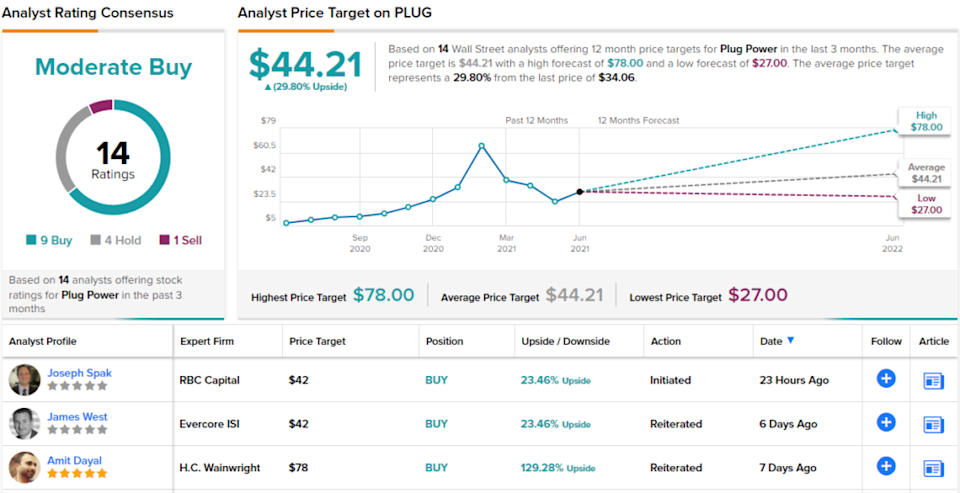