GameStop (GME) is poised to report fiscal first-quarter results after market close on Wednesday, which will likely reflect improved sales and narrowing losses even as many investors fixate on the company's "meme stock" clout over business performance.

Here are the main results Wall Street expects to see in GameStop's report, based on consensus estimates compiled by Bloomberg:

GameStop, one of the original names to be pushed higher during a frenzy of retail investor activity earlier this year, has seen a renewed wave of interest online in recent weeks. Traders on platforms including Reddit's forum r/wallstreetbets have touted GameStop and other stocks like AMC Entertainment (AMC), BlackBerry (BB) and Bed Bath & Beyond (BBBY), which have each been the target of considerable short interest. In doing so, these users have helped stoke widespread purchases of these shares and catalyzed significant short squeezes, as those who bet against the stocks scrambled to cover their short positions.

According to data from S3 Partners, short interest in GameStop totaled $3.04 billion as of Tuesday's close, with 10.86 million shares shorted for a 19% short percent of float (the percentage of a company’s stock that has been shorted by institutional traders). Short sellers in GameStop were down by $294 million last week. 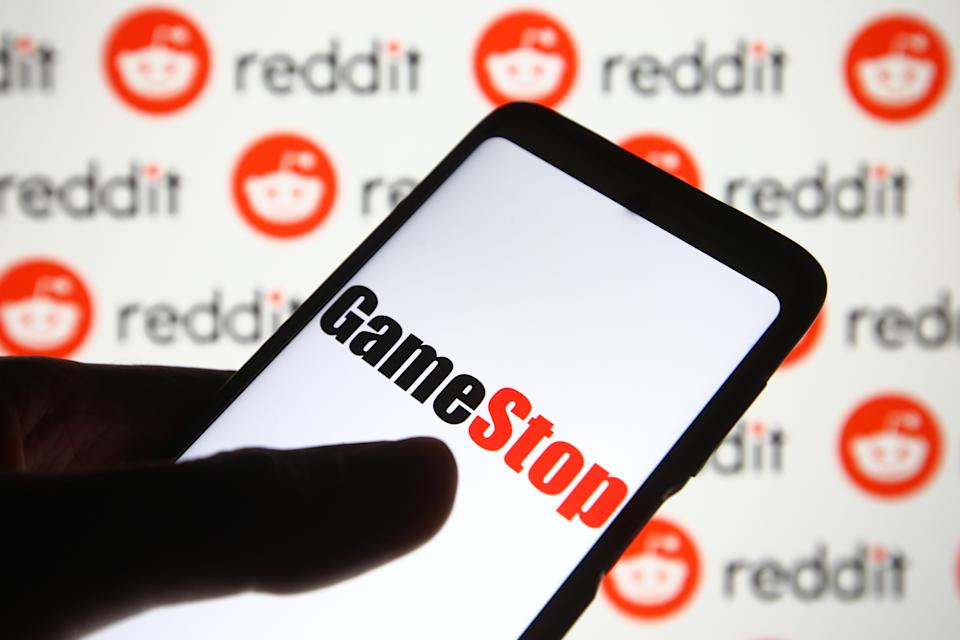 UKRAINE – 2021/02/05: In this photo illustration a GameStop logo is seen on a mobile phone screen in front of Reddit logo. (Photo Illustration by Pavlo Gonchar/SOPA Images/LightRocket via Getty Images)

For many investors, company fundamentals have taken a back seat to the mass appeal of these stocks when making investment decisions. GameStop is expected to post its fourth loss in the past five quarters. Revenue is expected to grow 15% to mark the first year-over-year increase in nearly three years. These estimates were drawn from just three Wall Street firms, given that the majority of sell-side analysts dropped their coverage of GameStop's stock in recent months given its elevated volatility.

And of the analysts that still cover GameStop, most have taken a bearish stance on the stock.

"We rate GameStop underperform given our belief that multiple structural headwinds centered around digital disintermediation will continue to weigh on earnings and cash flow," Bank of America's Curtis Nagle wrote in a recent note. "GameStop currently has a significant cash position which we expect to be used to pay down debt and repurchase shares. However, with the risk that free cash turns negative over the next few years, earnings support from capital return will ultimately fade and likely be overwhelmed by persistently declining operating earnings."

Last quarter, the company declined to provide guidance and reported fourth-quarter adjusted earnings per share, revenue and comparable sales that each missed estimates, though these metrics recovered from their worst points from during the pandemic.

However, some have asserted that there is a fundamental argument to be made for investing in shares of companies like AMC and GameStop, with the consumer-facing, brick-and-mortar businesses benefiting from the same "reopening trade" rotation that has lifted airline, cruise line, leisure stocks and retailers.

And both GameStop and AMC have attempted to capitalize on their hefty retail investor base. The companies have issued millions of new shares over the last several months — with prominent disclaimers about potential volatility and losses for investors — as a means of raising additional funds to reinvest in the businesses. AMC recently took that strategy one step further, launching a new shareholder platform to engage directly with investors and offering them in-person perks like free popcorn at the company's theaters.

"AMC, to me, is probably the most interesting of these [speculative trades] in how people are looking at it right now," JJ Kinahan, TD Ameritrade chief market strategist, told Yahoo Finance. "Whereas GameStop … I think is more of the pure 'meme stock' and we're trying to figure out what the fundamentals are. And I think their earnings coming out this Wednesday is going to be a really interesting story."

Valuation has been a key concern for analysts covering GameStop, and a number have fully pulled coverage on the share amid the unprecedented retail investor interest. Of those that still cover the stock, two rated the stock as a Hold, while two rated the stocks as a Sell.

GameStop shares have rallied more than 1,400% for the year-to-date, including a rise of 86% over the past month alone.

This post will be updated with the results of GameStop's quarterly results Wednesday after market close. Check back for updates.