The famed meme stock, GameStop Corp. (GME) may have price action completely detached from its fundamentals as a business, but that does exclude it from releasing earnings reports. The video game retailer is slated to hold its earnings call after-market hours on Wednesday June 9.

Year to date, GME shares have climbed an astounding 1,639.13%, mostly attributable to a high-profile short squeeze in January, as well as sustained retail enthusiasm ever since. For example, GameStop shares are up over 86% in the last 30 days. Although some of the most bullish investors are not expecting too much from earnings, they will inevitably be part of the story. (See GME stock analysis on TipRanks)

A Wall Street consensus expects GameStop to release revenues of $1.16 billion, and an EPS of –0.67. GameStop has suspended its guidance and its transformation strategy continues to be more opaque than not.

In the previous quarter, GameStop underperformed its Wall Street EPS expectations of $1.46, instead hitting $1.34. (See GME earnings calendar on TipRanks)

On June 7, analyst Michael Pachter of Wedbush Securities reiterated a Sell rating on the stock, saying the current price valuation in no way reflects the business’s underlying fundamentals or cash flows. Pachter maintained his price target of $39, indicating a precipitous potential downside of 87% from the company’s $300 Tuesday closing share price.

Pachter says that GameStop is best poised to capitalize from new gaming console releases and sales, although recent semiconductor supply chain constraints have limited sales growth. Pachter expects the net sales to miss Wall Street expectations, but is positive about the company's transition to eCommerce and its massive store closures in 2020.

With that in mind, he stated that a return to profitability would be expected by the end of FY21.

The analyst also wrote that it was unclear who would replace the current outgoing CEO, leaving more uncertainty about the future of the company. Additionally, how it would capitalize on the volatile rise in share price or not remains unclear.

Despite all of these big questions, none is technically relevant to the short-term price action as long as retail investor exuberance continues to burn brightly and with fervor.

On TipRanks, GameStop has an analyst rating consensus of Moderate Sell, based on 1 Buy, 2 Hold, and 3 Sell recommendations. The average analyst GME price target is $67.25, reflecting a potential 12-month decline of 77.58%. 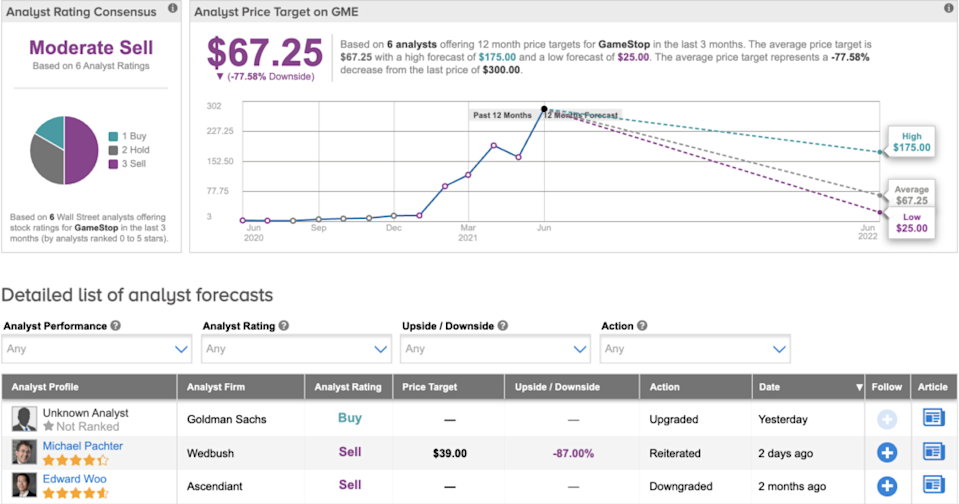