FuboTV Expands to LG, But Outlook Not Yet Carefree

A streaming service with a strong focus on sports, FuboTV (FUBO) recently announced it would be offered on LG SmartTV’s in the U.S., increasing its customer base and brand awareness. (See FUBO stock analysis on TipRanks)

Publishing on a report on the matter, Darren Aftahi of Roth Capital Partners wrote that integration with LG “should help it grow top of funnel consumer awareness.” Aftahi maintained a Buy rating on the stock, and declared a price target of $42.

Aftahi explained that consumers with LG SmartTV’s will have immediate access to free trials of FuboTV, which will be promoted for user download. This is significant as LG currently already holds about a 12% market share in the U.S. It is important to note, however, that the LG deal will only apply to models of the years 2018 through 2021.

The company has been making headway as of late, but it is not without its risks, details Aftahi. FuboTV relies heavily on sports content, and any sort of stoppages in the sports world will severely disrupt its outlook on growth. Furthermore, as big-ticket events such as the Olympics were cancelled last year, similar instances occurring will directly impact subscriber growth.

The analyst was also concerned about sports streaming offerings from Youtube TV and Hulu, as well as other large service providers mounting serious competition. If Fubo is unable “to differentiate its service, attract, continually engage and retain users” its outlook will be impacted for the worse.

On TipRanks, FUBO has an analyst rating consensus of Strong Buy, based on 6 Buy and 1 hold ratings. The average analyst FUBO price target is $38.86 per share, reflecting a potential 12-month upside of 29.2%. 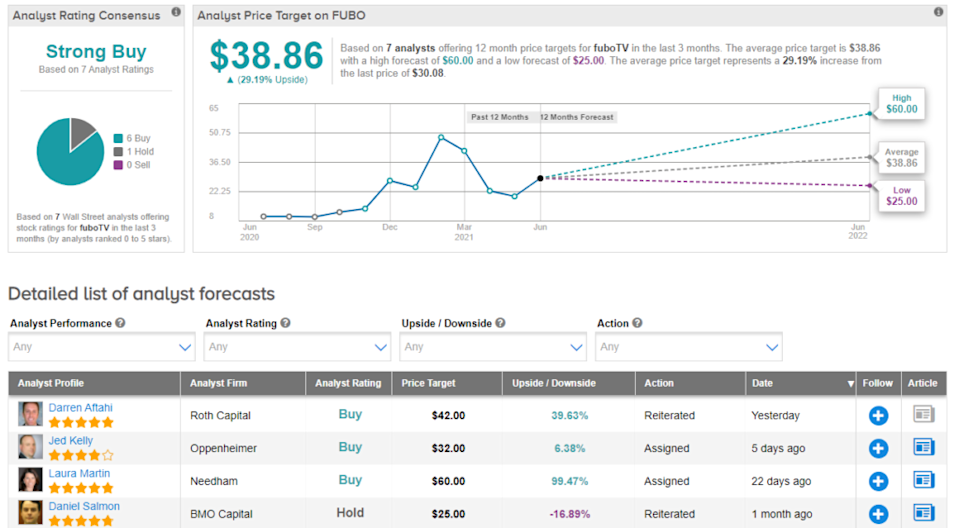