Just last week, some of the world's largest integrated energy companies faced the wrath of furious investors and climate activism. Exxon Mobil (NYSE:XOM) lost three board seats to Engine No. 1, an activist hedge fund, in a stunning proxy campaign, while a good 61% of Chevron (NYSE:CVX) shareholders voted to further cut emissions at the company's annual investor meeting a week ago.

Engine No. 1 has told the Financial Times that Exxon will need to cut fossil fuel production for the company to position itself for long-term success, "What we're saying is, plan for a world where maybe the world doesn't need your barrels," Engine No.1 leader Charlie Penner has told FT.

Meanwhile, a Dutch court has ordered Royal Dutch Shell (NYSE:RDS.A) to cut its greenhouse gas emissions harder and faster than it had previously planned.

Whereas climate change issues are the presumptive reasons behind the latest wave of investor revolts at the oil and gas giants, lurking beneath the surface is a growing sense of apprehension about Big Oil's strategy and failure to generate adequate returns for shareholders in recent decades.

The naked truth is that Exxon and its cohorts have severely underperformed the broader market over the last two decades in terms of total returns to shareholders, implying the sector's woes are long-term and strategic rather than short-term and cyclical. 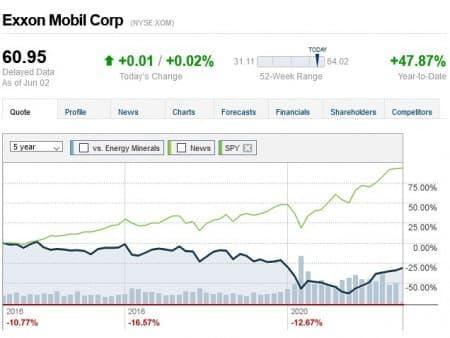 Big Oil's underperformance relative to the market is clearly evident whether you are looking at 2-year, 5-year, 10-year, or even 20-year timespans.

For instance, since 2015, Exxon shares have returned a -2.5% compound annual loss based on share prices and dividends, a far cry from the average annual gain of +14.4% by the S&P 500 over the timeframe.

Over the past two decades, Exxon's compound annual return has clocked in at +4.2%, still considerably lower than the broad market benchmark's return of +7.1%.

Exxon is hardly alone, with none of its peers, including Chevron, Royal Dutch Shell (NYSE:RDS.A), BP Inc. (NYSE:BP), and Total (NYSE:TOT) coming close to matching the returns by the broader share market over the past decade.

In fact, on an inflation-adjusted U.S. dollar basis, returns by Exxon, Shell, and BP have been negative over the past five years, a period which coincided with the biggest bull market in the history of the stock market.

You cannot blame the oil majors for continuing to engage in a lot of hand-wringing at a time when investors are demanding they pump less oil and transition to cleaner energy.

For the oil majors, successfully transitioning to green energy companies is not going to be a walk in the park because these companies have to ride two horses.

That's the case because the majority are already battling dwindling cash flows which means they cannot afford to gamble with whatever little is left. Oil prices have been on a downtrend since 2014, a situation that has only worsened during the pandemic.

Oil and gas firms are still grappling with the best way to presently use dwindling cash flows; in effect, they are still weighing whether it's worthwhile to at least partially reinvent themselves as renewables businesses while also determining which low-carbon energy markets offer the most attractive future returns.

Most renewable ventures, like solar and wind projects, tend to churn out cash flows akin to annuities for several decades after initial up-front capital expenditure with generally low price risk as opposed to their current models with faster payback but high oil price risk. With the need to generate quick shareholder returns, some fossil fuel companies have actually been scaling back their clean energy investments.

Energy companies are also faced with another conundrum: Diminishing returns from their clean energy investments.

A paper published in Science Direct last August says that dramatic reductions in the cost of wind and solar have been leading to an even bigger reduction in revenue inflows leading to falling profits. This is particularly true for wind energy as later deployments of wind usually have lower market value than earlier ones due to wind energy revenue declining more rapidly than cost reductions. Solar is more resilient, with technological progress approximately balancing out the revenue degradation, which perhaps explains why solar stocks have gone ballistic.

Adding wind and solar to our grid tends to reduce electricity prices during peak generation times: Indeed, electricity prices in California can come down to zero during long sunny durations. This was not a problem for early deployments but is becoming a major concern as renewables increasingly play a bigger part in our electricity generation mix.

But, ultimately, Big Oil will have to take the plunge and engage in drastic internal restructuring and product cycle transitions even as activists like Engine No.1 promise to continue turning the screw. As Charlie Penner of Engine No.1 has told FT, the energy transition is happening faster than expected and has undermined Big Oil's assumptions about long-term demand for its oil.