Automaker Ford Motor Company (NYSE:F) is up 1.3% to trade at $14.66 at last check. Though a catalyst for today's positive price action remains unclear, the security boasts a 140.2% year-over-year lead, and is fresh off a June 4, seven-year high of $16.45. What's more, the security has just pulled back to trendline with historically bullish implications, which could catapult Ford Motor stock back to higher levels over the next few weeks.

Digging deeper, the equity just came within one standard deviation of its 40-day moving average, after spending nearly two months above this trendline. According to data from Schaeffer's Senior Quantitative Analyst Rocky White, at least seven similar signals have occurred in the past three years. The equity enjoyed a positive return one month later in 57% of these cases, averaging a 5.2% gain. From its current perch, a comparable move would put the Ford Motor stock over the $15 mark, much closer to its seven-year peak. 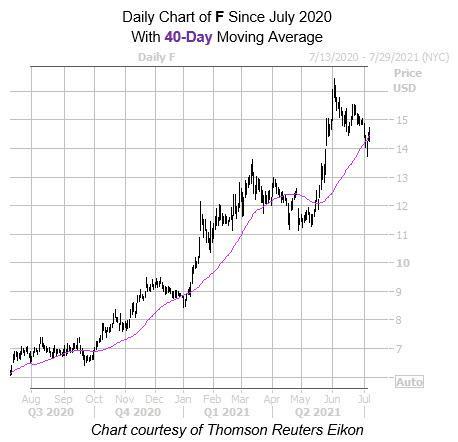 The security could also benefit from a sentiment shift over in the options pits, which lean bearish. This is per Ford stock's Schaeffer's put/call open interest ratio (SOIR), which stands higher than 77% of readings from the past 12 months. In simpler terms, short-term options traders have rarely been more put-biased.

Lastly, F premiums can be had for a discount right now. The security's Schaeffer's Volatility Index (SVI) of 41% sits in the 21st percentile of readings in its annual range. This means options players are pricing in low volatility expectations for Ford stock at the moment.