The Federal Reserve had hoped for a string of strong jobs reports showing a pace of 1 million monthly job gains.

Instead, the Fed received larger-than-expected readings on inflation.

For a central bank that has reiterated its higher bar for pulling its monetary stimulus, recent data points could test the resolve of policymakers with regard to its quantitative easing program.

Since the Fed’s last policy-setting meeting in May, several Fed officials voiced interest in taking the first step toward slowing the central bank’s $120 billion-a-month pace of U.S. Treasury and agency mortgage-backed securities purchases.

“There is some upside risk to increased inflation,” Philadelphia Fed President Patrick Harker said on June 2.

The Consumer Price Index in May rose by the fastest year-over-year pace since August 2008. Another measure of inflation, the Producer Price Index, recorded its fastest 12-month growth on record since the Bureau of Labor Statistics began the dataset in November 2010.

Still, many Fed officials insist that the high data readings are due to temporary factors like supply chain bottlenecks. Shortages in microchips are continuing to put upward pressure on cars. But lumber prices, which skyrocketed in the late spring, are now tumbling.

“I continue to believe as my baseline case that this will prove to be largely transitory,” Fed Vice Chairman Richard Clarida told Yahoo Finance on May 25 (before the May CPI and PPI prints).

Fed watchers expect that “transitory” will remain the prevailing view among the Federal Open Market Committee, meaning that those eager to talk about tapering may be in the minority this week.

A BofA survey done last week noted that 63% of global fund managers do not expect the Fed to signal tapering until August or September — most likely at the Fed’s late-August meeting in Jackson Hole, Wyoming. 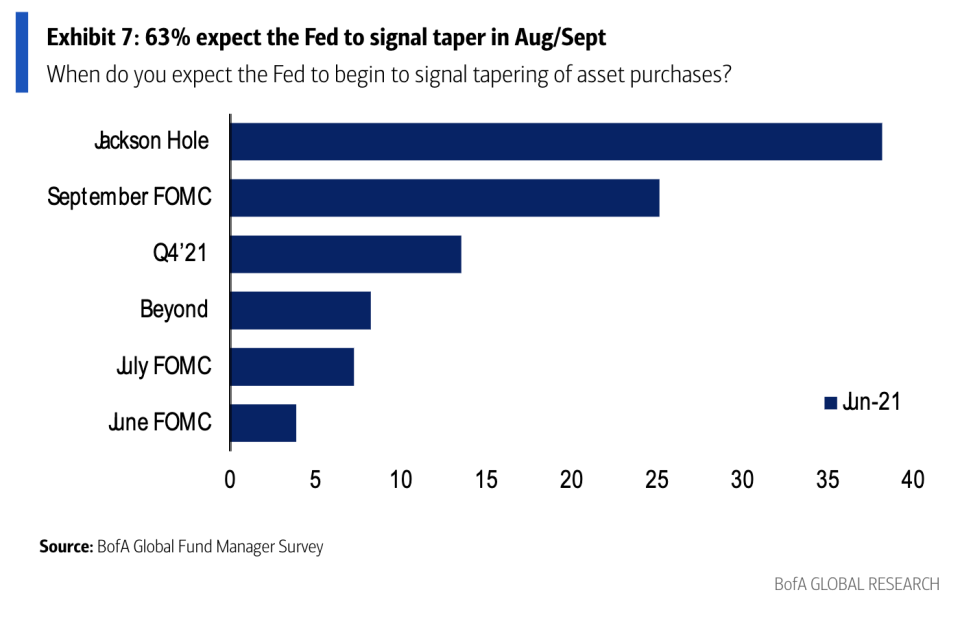 A BofA survey conducted between June 4-10, 2021 notes that most fund managers do not expect the Fed to signal a taper in this week’s meeting. Source: BofA Fund Manager Survey, DataStream

“This is not a Fed that is rushing to the exits,” BofA Global Research analysts wrote on June 14. “That said, we expect a few nuanced changes that would sound less dovish than in the April meeting.”

The Fed is continuing to keep a focus on the labor market, where May jobs data showed the economy still 7.6 million jobs short of pre-pandemic levels.

When is a rate hike coming?

Commentary on the Fed’s asset purchases could come from the FOMC policy statement or Fed Chairman Jerome Powell’s press conference at 2:30 p.m. ET on Wednesday.

The FOMC’s next round of economic projections, due alongside the policy statement, could also offer some clues.

Those projections will include an update to the so-called “dot plots,” which map out each FOMC member’s forecasts for where interest rates may head in the future. The Fed’s last round of projections in March had the median member of the committee projecting no rate hike through the end of 2023. 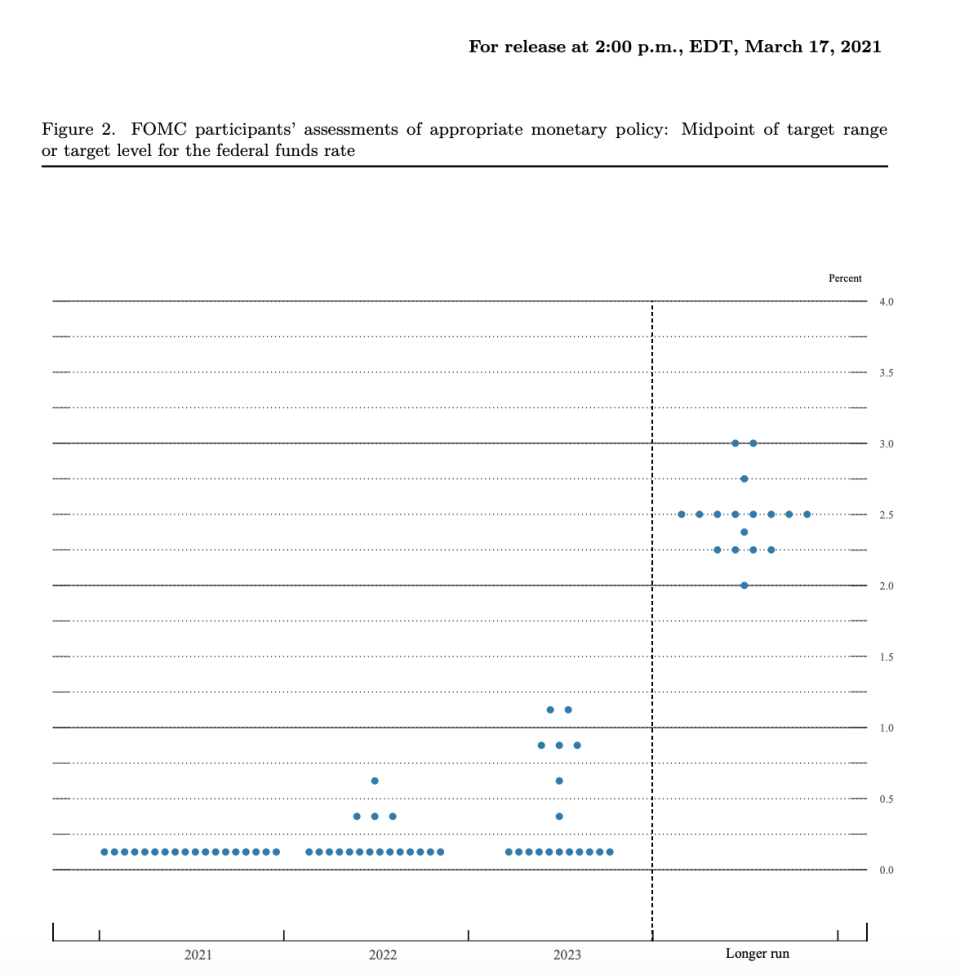 The March 2021 Summary of Economic Projections map out each FOMC member’s expectations for where interest rates may go in the coming years. The so-called “dot plots” show the median member expecting no rate hike through the end of 2023. Source: Federal Reserve

With more Fed officials having expressed interest in kicking off taper talks, chatter is building over whether or not the dot plot will show the median FOMC member projecting a rate hike by the end of 2023.

“In light of the transitory nature of the recent spike in prices, our best guess is no, but it is a close call,” Goldman Sachs’s economics team wrote on June 13.

The Goldman note pointed out that the dots may be “guided by some steering” from Powell, who would face some tricky questions on how the “transitory” view on inflation squares with the expectation for an earlier rate hike.

Still, if only three more FOMC members revise up their expectations for interest rates in 2023, the median dot would reflect one rate hike.

Here’s what Fed officials have said since the central bank’s last policy-setting meeting in April:

What Fed officials have said about inflation:

Fed Chairman Jerome Powell (voter): “We saw in the last expansion that unemployment could go to 50 year lows without troubling inflation and we put that to work.” (Remarks at National Community Reinvestment Coalition, May 3)

Fed Vice Chairman Randal Quarles (voter): “You’re going to see inflationary pressures. That’s going to happen. It’s not going to be surprising. And one would expect it to be temporary. But we could be wrong.” (Politico interview, June 1)

Fed Governor Lael Brainard (voter): “In assessing the risk that such transitory pricing pressures get embedded in persistently high inflation, it is critical to remember that inflation averaged less than 2% over the past quarter-century, and that statistical measures of trend inflation ran consistently below 2% for decades before the pandemic.” (Remarks at Economic Club of New York, June 1)

Fed Governor Michelle Bowman (voter): “If the supply bottlenecks prove to be more long-lasting than currently expected, I will adjust my views on the inflation outlook accordingly. At this point, the risk that inflation remains persistently above our long-run target of 2% still appears small.” (Remarks at The Colorado Forum, May 5)

Fed Governor Christopher Waller (voter): “Despite the unexpectedly high [April] CPI inflation report yesterday, the factors putting upward pressure on inflation are temporary, and an accommodative monetary policy continues to have an important role to play in supporting the recovery.” (Remarks at the Global Interdependence Center, May 13)

Boston Fed President Eric Rosengren: “One-time, temporary changes in prices should not impact the medium-term trajectory of inflation.” (Remarks at Boston College, May 5)

New York Fed President John Williams: “My personal view is that a big chunk of the increase in the inflation measures that we've seen is really partly this reversal price declines from before, what we often called base effects, plus some special factors like used cars and others where clearly the pandemic has affected demand for certain goods that are in short supply at least in the near term.” (Yahoo Finance interview, June 3)

Philadelphia Fed President Patrick Harker: “With the economy picking up and so much fiscal support and monetary accommodation, there is some upside risk to increased inflation.” (Remarks at Women in Housing and Finance Public Policy Luncheon, June 2)

Cleveland Fed President Loretta Mester: “My expectation is that we'll end the year with inflation above 2%. But then next year, as those supply constraints are eased, inflation numbers will go back down. And then, with the support of monetary policy and fiscal policy we’ll see those inflation reads move back up.” (Yahoo Finance interview, May 11)

Richmond Fed President Thomas Barkin (voter): “Inflation is a multi-year, recurring, persistent phenomenon and as I talk to businesses I’m still not hearing their medium- to long-term expectations on pricing changing, nor are market measures on inflation escalating above our target.” (Remarks at West Virginia Chamber, May 7)

Atlanta Fed President Raphael Bostic (voter): “We’re really in a turbulent time and what I try to tell people is, this a time when I would expect there to be a fair amount of volatility in inflation.” (Remarks at Council on Foreign Relations, May 12)

Chicago Fed President Charles Evans (voter): “It is important to emphasize that the recent increase in inflation does not appear to be the precursor of a persistent movement to undesirably high levels of inflation.” (Remarks at Bank of Japan, May 25)

St. Louis Fed President James Bullard: “We'll see if the demand really flows through to a lasting increase in inflation or if this is just temporary. I think it's mostly temporary but then some of it will flow through to inflation expectations, and then we will get inflation above 2% this year and into 2022.” (Yahoo Finance interview, May 24)

Minneapolis Fed President Neel Kashkari: “I'm very skeptical that we're going to have sustained high inflation if we still have five or 10 million Americans out of work. We think the labor market is really what's going to drive inflation over the long term.” (Face the Nation interview on CBS, May 9)

Kansas City Fed President Esther George: “What the current pace of inflation means for the inflation outlook for the medium term is less than clear. Many factors that have boosted current inflation seem likely to fade over time. All the same, I am not inclined to dismiss today’s pricing signals or to be overly reliant on historical relationships and dynamics in judging the outlook for inflation.” (Remarks at Oklahoma Bankers Association, May 26)

Dallas Fed President Robert Kaplan: “It’s uncertain as to how long these supply-demand imbalances are going to persist. Our base case is that next year you’ll see some moderation [in inflation], but I think there’s a lot of uncertainty about this.” (Remarks at Dallas Fed, May 17)

San Francisco Fed President Mary Daly (voter): "[Supply constraints] will cause inflation to pop in the next several months, probably through the end of the year, even, achieving levels above 2%. But that's going to be transitory in our judgment — in my judgment. And it'll come back down to the underlying rate of inflation, which I think is about 1.8% going forward.” (Yahoo Finance interview, May 10)