FedEx (FDX) is poised to report fiscal fourth-quarter earnings after market close on Thursday, with the shipping company's results likely to get a boost from persistent strength in e-commerce and a pick-up in business and international shipping.

Here are the main metrics expected from FedEx's report, compared to consensus estimates compiled by Bloomberg:

The Memphis, Tennessee-based company is expected to see sales grow by 24% over last year, or at the fastest rate since at least 2010, based on Bloomberg data spanning back more than a decade. Results for the three months ending in May will be aided by a consumer still shopping heavily online, along with a boost in business-to-business shipment spending as vaccinations picked up and more firms reopened in the spring.

And with shipping demand elevated, the company has also demonstrated strong pricing power, which could support margins and overall profits for the quarter. FedEx Express package and freight standard rates rose by an average of 4.9% for many U.S. services at the beginning of the year, and a number of other surcharges also took effect later on in 2021. This extended a number of surcharges introduced in 2020 as the shipping giant passed on costs associated with the higher volumes to its customers. 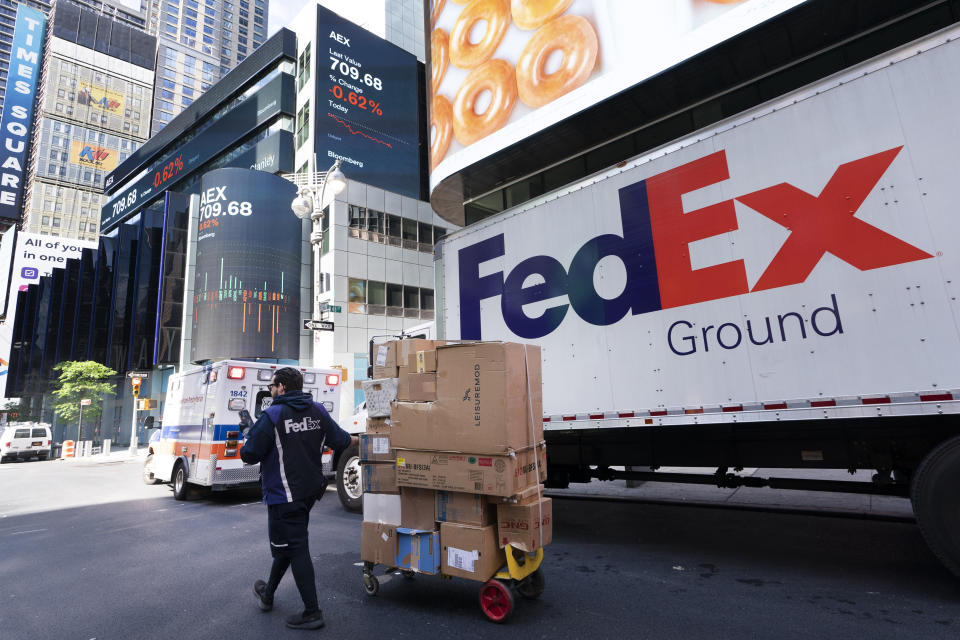 A FedEx driver delivers a cart of packages, Thursday, May 6, 2021 in New York. (AP Photo/Mark Lennihan)

And with businesses across industries reporting supply chain constraints and shortages, many customers may have ramped up spending on the company's higher-priced express shipping options in the fourth quarter, some analysts suggested. Business shipments tend to provide higher margins in general for FedEx than residential deliveries do, offering another point of strength for the company's fourth quarter.

"We believe a strong pricing trend and cyclical improvement in B2B [business-to-business] volumes provide support for margin expansion in Ground and Express," UBS analyst Thomas Wadewitz wrote in a note. The firm rates FedEx shares as a Buy, with a $383 12-month price target.

"The backdrop of disruption to supply chains and low inventories should support volumes in FDX's Express business and despite more difficult comparisons we also expect support from higher international airfreight rates year-over-year," he added.

Overall, FedEx's Express business segment is expected to post sales of $10.9 billion for the fourth quarter, rising 27% year-over-year, according to Bloomberg consensus data. The FedEx Ground segment, the company's second-largest by revenue, will likely grow 23% to $7.8 billion. Total average daily packages are expected to increase 22% to 6.6 million, with nearly half of these comprising domestic shipments.

Shares of FedEx have increased by just over 16.2% for the year-to-date, outperforming the S&P 500's 13.5% increase over that time period.

This post will be updated with the results of FedEx's fiscal fourth quarter report. Check back for updates.